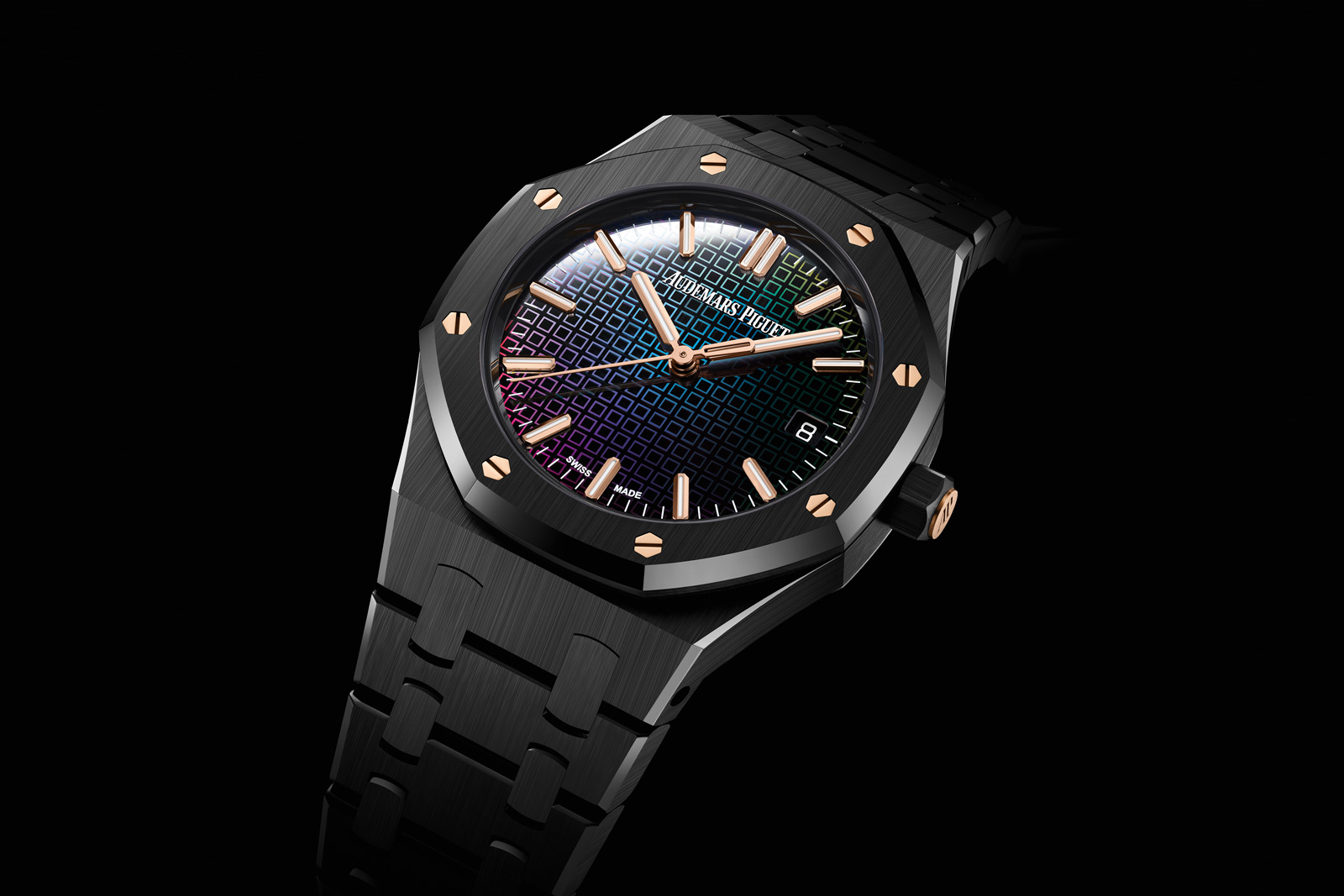 Another week, another flurry of watch releases. First, we hear from Ralf and Misael on the latest from Audemars Piguet and IWC respectively. Next, we see the brilliance of the watch making houses at Zenith x Kari Voutilainen, Glashütte Original and Mb&f before rounding up with the latest in Grand Seiko’s 44GS 55th anniversary celebrations. But first, Frederique Constant scores a major win for NFTs in the watch circles.  These are the top 7 things in the world of watches; let’s get into it.

NFTs have generally been hit and miss in the watch industry with a scattered approach to its adoption by various brands so far. Well, we have just had another hit, and a rather significant one at that. Frederique Constant, has delivered where some even some bigger brand have failed, with its Time to Travel Series of NFTs selling out in under 48 hours. What is even more remarkable is that the collection was not made up of a small number of NFTs. Instead, there were an impressive  888 NFTs in total. This launch was meant as a celebration of the 10th Anniversary of the brand’s classic Worldtimer collection and the NFTs were unsurprisingly based off that very series. The 24 cities on the Worldtimer each had a number of NFTs, designed after the respective cityscape, dedicated to it. As with all things in the watch industry, some of the NFTs were more exclusive than others, with Geneva being the most limited with only 10 NFTs designed after it. Overall, this was a interesting concept from Frederique Constant. While I am still on the fence over the actual benefits of NFTs to watches, it feels apt that this brand is continuing its tradition of pushing boundaries and innovating. 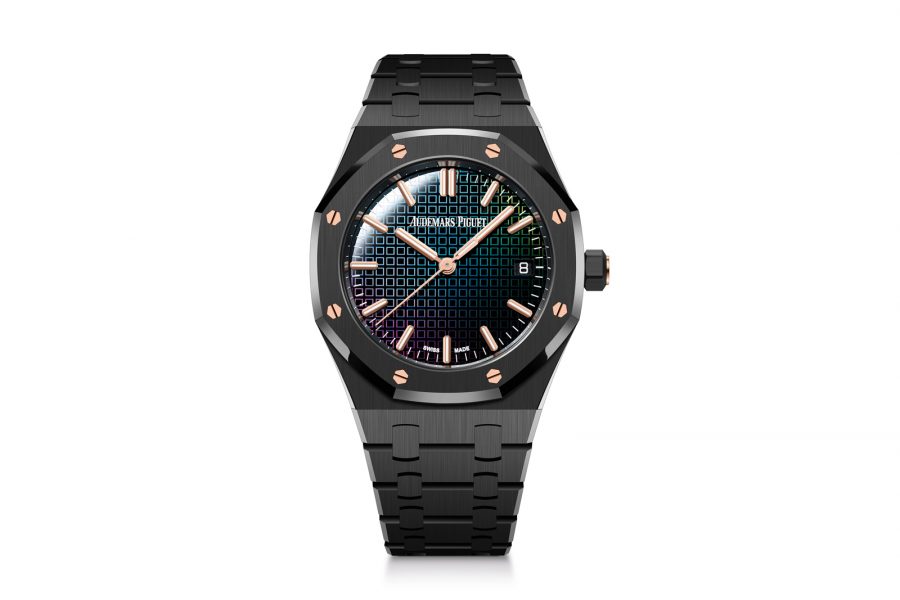 This week, we’ve also had the Audemars Piguet 34mm Royal Oak Selfwinding black ceramic, which has been improved with the help of Carolina Bucci. The standard tapisserie dial has been given the rainbow treatment quite literally.  This multi-colored rainbow design has been created by micro-structuring the top of the brass dial while adding a golden metallic treatment on the back of the sapphire crystal that lies on top of the dial plate. This involved quite an elaborate process but the end result worked out brilliantly well.

It’s limited to only 300 pieces. and no two of them will look the same due to the slight variations in the colors. The watch is “unisex” and in general Royal Oaks wear a bit larger than their diameter suggests but 34mm is on the smaller side – so be sure to check a similarly sized watch to be sure before blindly ordering this beautiful watch. – Ralf, a.k.a @KoolPep 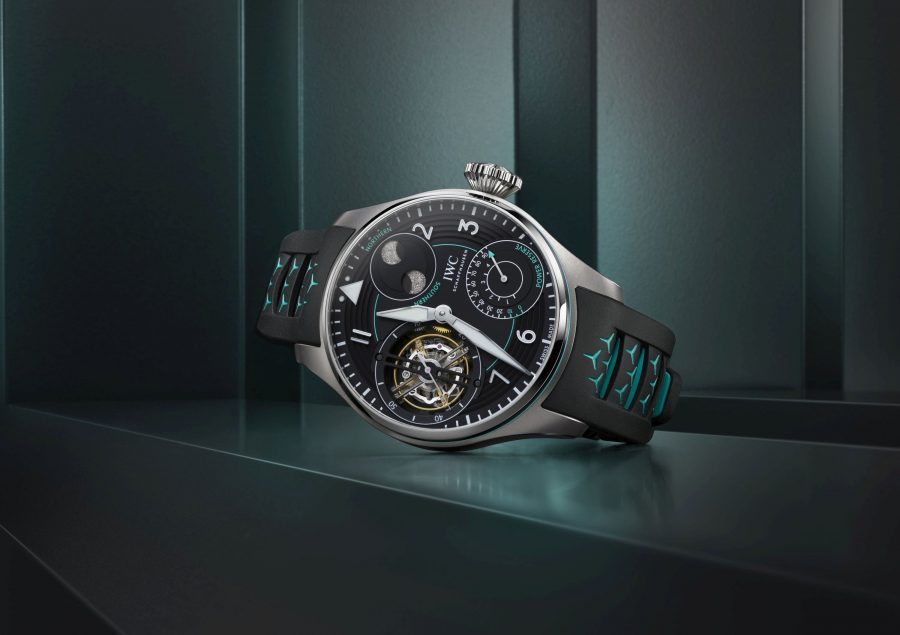 IWC is pulling all the stops with its Mercedes sponsorship, now with the Pilot’s Watch Constant-Force Tourbillon Edition “AMG One Owners”. Consistent with the previously released chronograph we have a titanium aluminide case, now 46.2 x 13.5mm, with a black dial and green accents matching the black rubber strap that has a green Mercedes logo pattern. Occupying the dial are the signature applied numerals, triangle at 12, and large sword hands all filled with lume, in keeping with this style. Then at 1 we find a moon phase complication, at 5 a power reserve display, and at 9 IWC’s patented integrated constant-force tourbillon.

This mechanism ensures that the amplitude of the balance remains constant, improving accuracy, initially by disconnecting the escapement from the direct flow of energy generated by the gear train. The energy is stored temporarily in a balance spring and dispensed to the escape wheel. In the process, the tension in the spring is increased once a second, and the second hand in the tourbillon advances in one-second steps. This ensures an extremely regular and precise rate for at least 48 hours of the 90 of power reserve. – Misael Alves 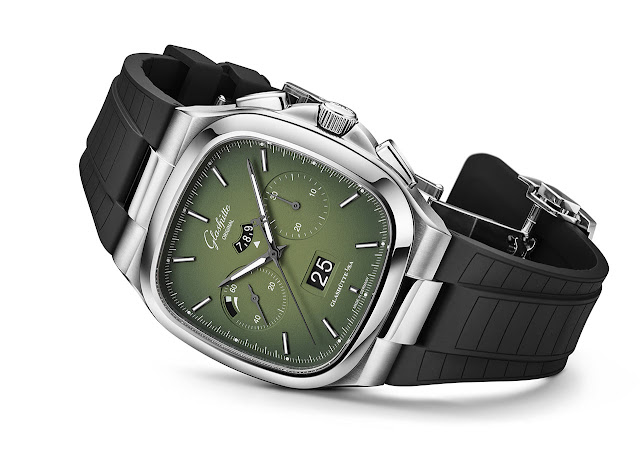 Glashütte Original (GO) is an often overlooked brand because its sits in in a sort of no man’s land in terms of both pricing and watchmaking. That’s a shame really because the brand has a rich illustrious history that traces back to 1843. Its latest release, the Seventies Chronograph Panorama Date, it’s a testament to what the brand can do if you give it a shot.

It features a cool dial in what the brand calls “Fab Green” (looks more avocado to me) and is housed in a unique case design. While it may be a chunky piece at 40mm x 40mm x 14.1mm, it works well as a sports watch and certainly stands out amidst an increasingly crowded category of integrated steel sports watches. Personally, I dig the look. Check out the full article here. 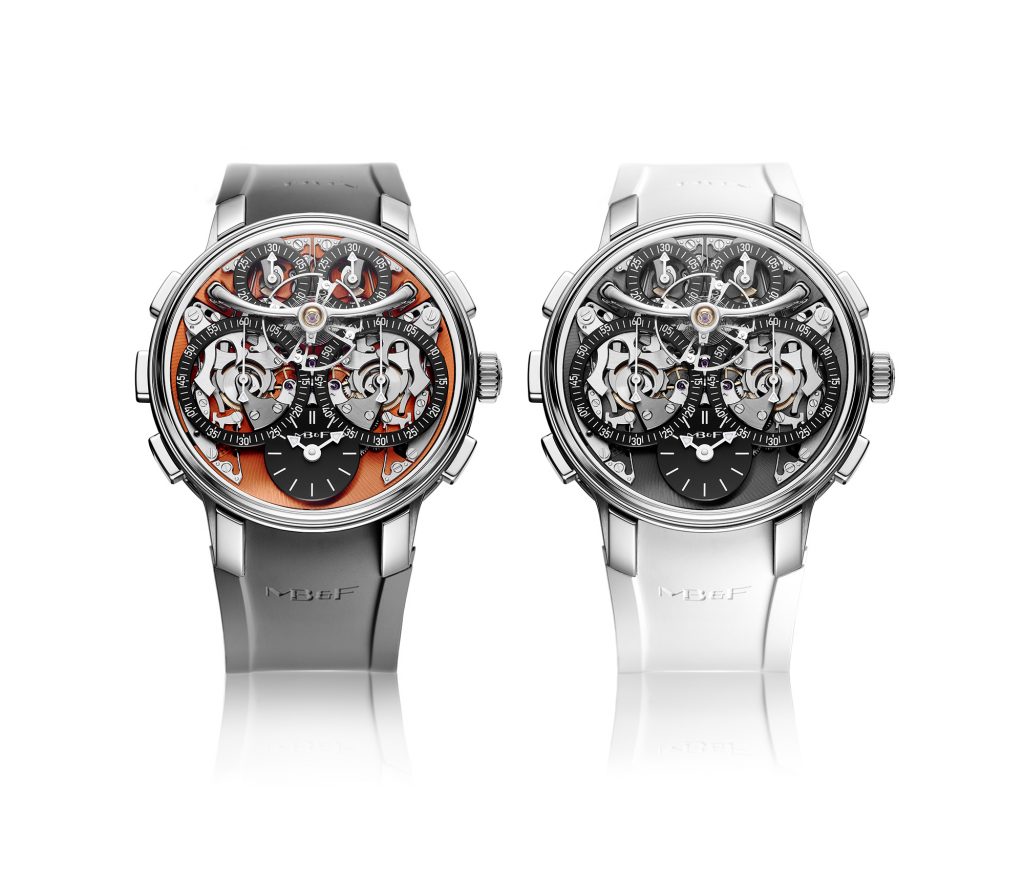 MB&F is known for its audacious watch designs that naturally flow from the innovative groundbreaking movements it develops works. Well, the brand is back at it again, with its first-ever chronograph.

Not just a chronograph watch, but two independently functioning chronographs that run through a single escapement with the dial side enlarged balance wheel that is now a hallmark of the brand. Each is operated by their respective pushers on the left and right of the case, but it also has a Twinverter pusher at 9 o’clock that can operate both chronographs at the same time regardless of whether they are running or not, & whether they are at the same time or not. In other words, the Twinverter could start one chronograph while stopping the other chronograph simultaneously.

Housed in a 44mm x 18mm case (with a high domed crystal), the matte black dial is angled near the 6 o’clock position with larger openworked seconds chronograph rings at  3 & 9 o’clock smaller matching rings for the 30-minute counters at 1 & 11 o’clock.

This extremely cool chronograph is the brainchild of Stephen McDonnell, who has worked with the brand before on its previous Legacy Machine Perpetual Calendar in 2015, and this collaboration is certainly another hit. It takes a special kind of genius to even dream up something like this and then brings it to fruition. Of course, only a handful of people will be able to afford it given it costs US$180,000, but it’s not limited so that’s a plus. 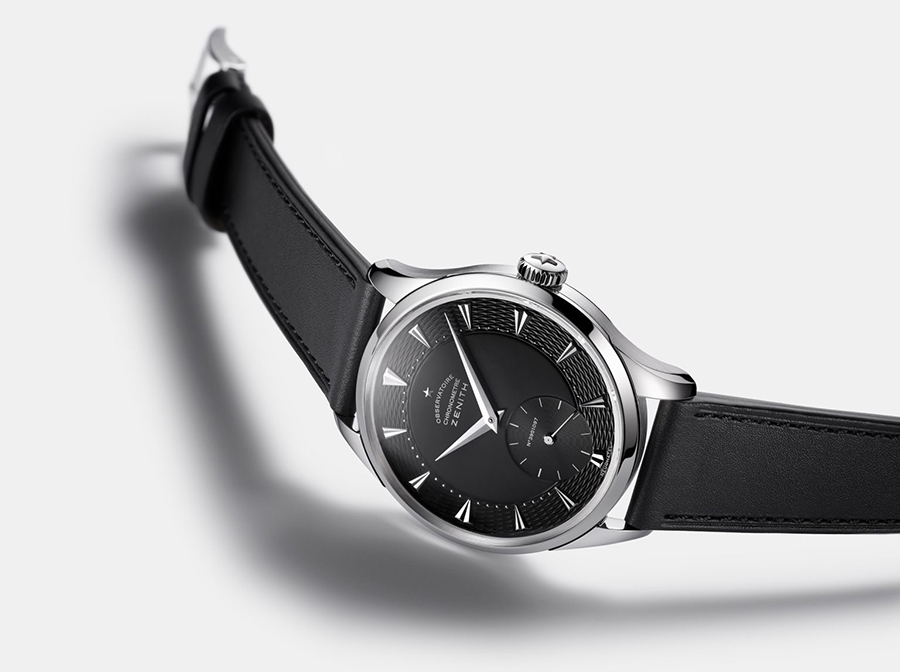 Any brand that can come up with a chronograph as brilliant as the El Primero must have a whole history of movement development behind them & that is something Zenith certainly has in spades. One of the key points of this history was the Calibre 135-O, a movement that was developed specifically for observatory competitions in mid 20th century and went on to win a very laudable 230 awards.

Interestingly, this was a relatively overlooked movement by the general masses, at least until recently, when Zenith decided to launch a special edition in collaboration with Kari Voutilainen and Phillips.  What is remarkable is that this special edition is not a reissue, as is common nowadays. Instead, the watch is powered by the actual Calibre 135-O movement from between 1950 to 1954, which has been restored and cased by Kari Voutilainen himself. How cool is that? Check out the full article here. 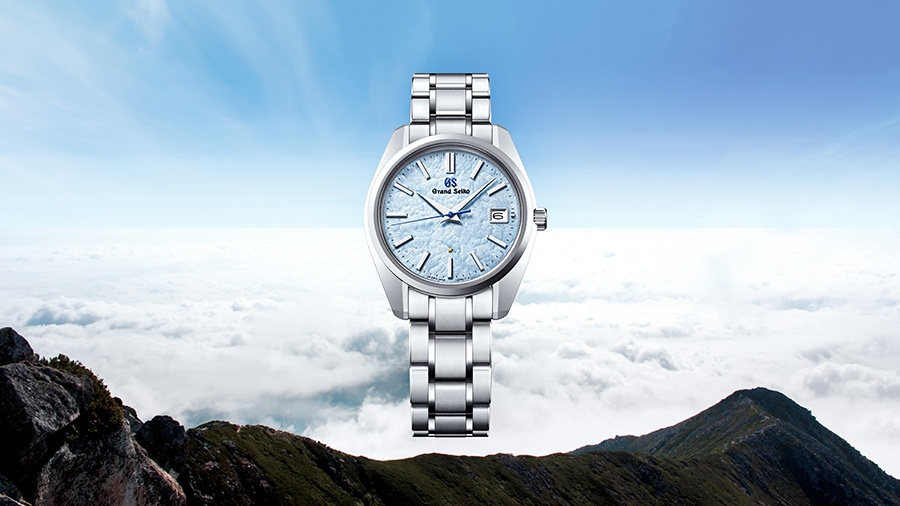 Finally, we have the just breaking news of the latest from Grand Seiko, assuming it was better at containing leaks. The brand’s celebrations for the 55th anniversary of the 44GS case continues. This time, the brand has released a quartz watch in its iconic case, something it has not yet done this year. Naturally, the focus would be on the dial, and it is a pretty little thing. It is inspired by the “Sea of Clouds” that forms above the mountains in Shinshu in very specific weather conditions in the morning. While I have no doubt the depth and quality of the sky blue dial in person would be brilliant to look at, its hard to feel as excited when the brand has used a very similar (if not exactly the same) dial pattern in multiple other watches that were all inspired by something different. What is different about this release is the use of the display case back that shows off its quartz movement, which the brand has taken the trouble to decorate and finish. That is something I can get behind, especially given that display case backs on quartz powered watches are rare. For those interested, the watch is priced at £3,200 and will be part of regular production. I know Ralf is chomping at the bit to get one, since he seems head over heels in love with this release. Check out his thoughts here. 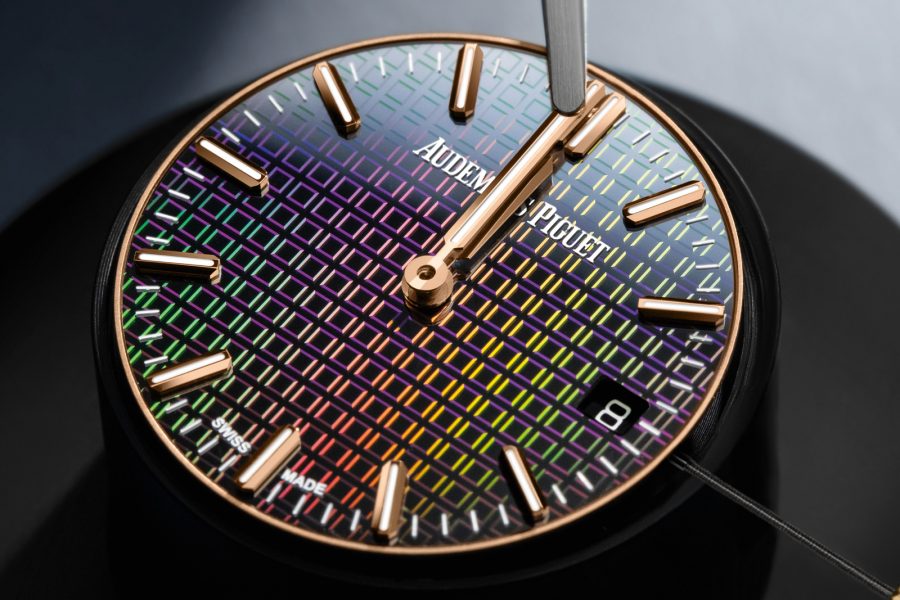