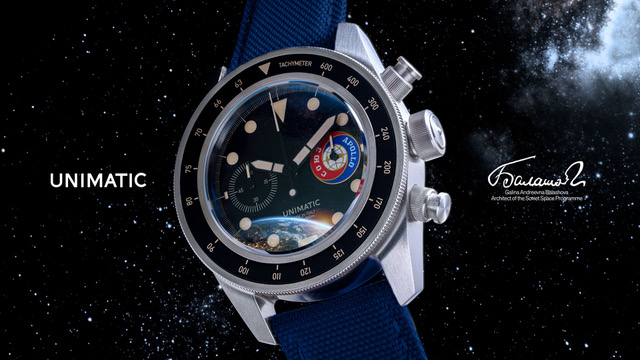 Watch brands are no strangers to limited editions. From the mighty Omega with their “lunchtime limited edition” Speedmasters, to Seiko with all manner of vintage re-issues and Casio with an ongoing stream of G-Shocks. So how would one define a Limited Edition? For Casio and Seiko that can mean anywhere to 1000 to 10000 pieces. Omega on the other hand is a little more restrained in these numbers: but for certain models the run can be over 1000 pieces. What about microbrands? Their production numbers are intrinsically small so one could argue that all pieces are “limited” in one way or another. Unimatic’s approach is pretty straightforward: all new releases are limited editions each one with production runs from anywhere as low as 20 to around 600 pieces. The lower the number, the more exclusive the model. Once they are sold, that’s it.

Their latest creation, the U3-AS, is a Seiko VK64 mecha-quartz powered chrono that commemorates an often forgotten, but quite amazing space mission: the 1975 Apollo-Soyuz Test Project. This watch is limited to 200 pieces.

This was the world’s first international crewed space mission manned by legends the likes of Deke Slayton and Alexei Leonov. Viewed by many as a Cold War political stunt, this mission laid the technological foundation that’s the basis of the international space station’s docking system. 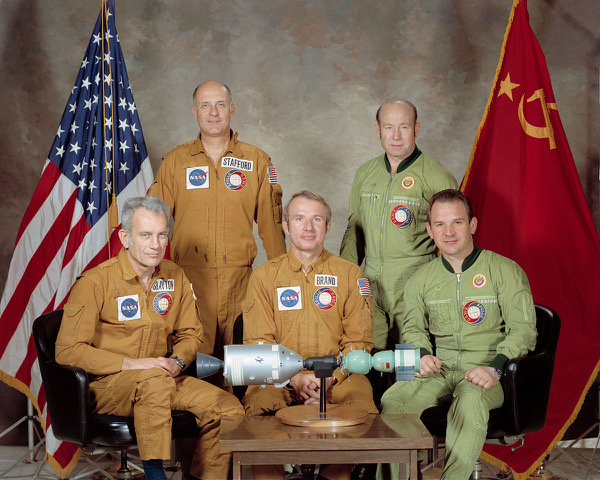 But, behind all the glitz and glamour are the unsung heroes. One such person is Galina A. Balashova. Ms. Balashova was the architect who was behind most of the interior designs and instrument panels of Soviet-era space craft including Soyuz and Mir. She also designed the Apollo Soyuz mission logo Unfortunately, she received little to no credit for all her hard work and things being the way they were in the former Soviet Union, she was not allowed to copyright any of her designs. 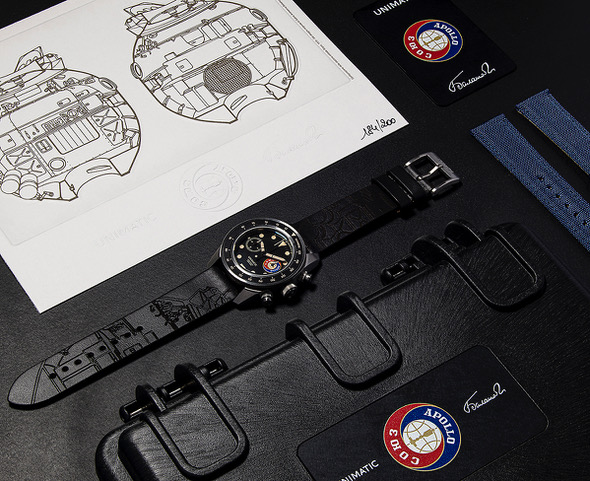 It’s fitting then that the founders of Unimatic, two industrial designers trained at the Politecnico di Milano, should honour their Russian colleague from the 70’s emblazoning the dial of their latest creation with the logo that Ms. Balashova so lovingly bought to life.

The watch itself has a solid very minimalist all brushed 40mm 316L steel case with an easy to grip 41,5mm rotating tachymeter bezel. I’m pretty much in doubt to the usefulness of such a bezel but it’s there nonetheless. The good news is that the finishing of all the components is excellent. The watch sports a 2,5mm thick domed sapphire crystal, screw down oversized crown and screw down pushers that give the chrono an impressive 300m of water resistance. It feels like a solid chunk of steel. Take that Omega Speedmaster! The dial, save for the colourful logo at 3 o’clock, is very clean and clinical with old radium type luminous material for the markers and hands. The 3’o clock sub-dial is a 24-hour indicator that is geared to the main hour hand: in essence it’s an AM:PM indicator; quite useful if you’re floating around in orbit. At the 9 o’clock is a 60-minute counter for the chrono function. There are no running seconds. This disguises the fact that the watch is quartz powered as there’s nothing on the dial that ticks. The central seconds chrono hand sweeps very smoothly with a 1/5 of a second resolution. 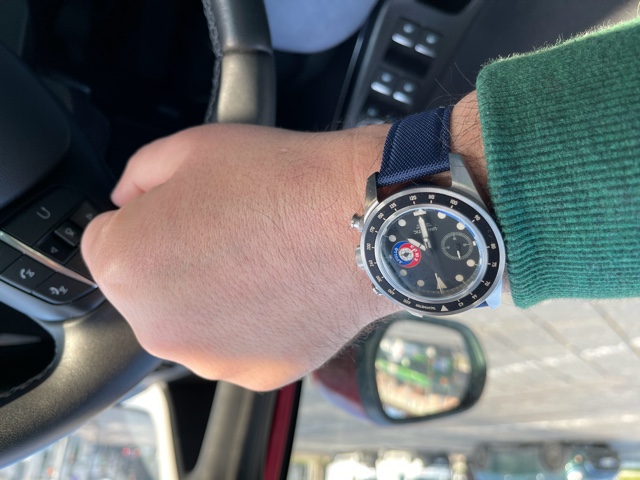 Given its relatively compact size of mostly 40mm it wears really well, despite its apparently chunky appearance and wider bezel. It’s rather thick at 14.5mm and with a lug to lug of 51mm it can overpower a very small wrist. Anybody with a medium sized wrist can pull it off no problem. 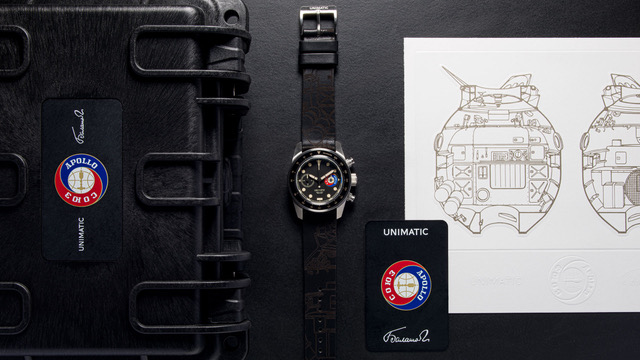 The watch is delivered in a very sturdy Pelican-type case that can house up to two watches, a special holographic thick plastic warranty card with the mission logo, a limited-edition numbered print with ms. Balashova’s Soyuz artwork and two straps. The first strap is a deep blue leather-lined cordura strap whose colour closely matches the shade of solar panels. The second strap is quite a treat: it’s a thick black leather affair which is laser etched with the included print’s design. Really Cool. Thankfully there is no 200-page instruction manual, just a QR code that points to an electronic version online. Well done Unimatic, all brands should work this way: the amount of wasted paper for a booklet no one will ever read is absurd. The world’s forests thank you. 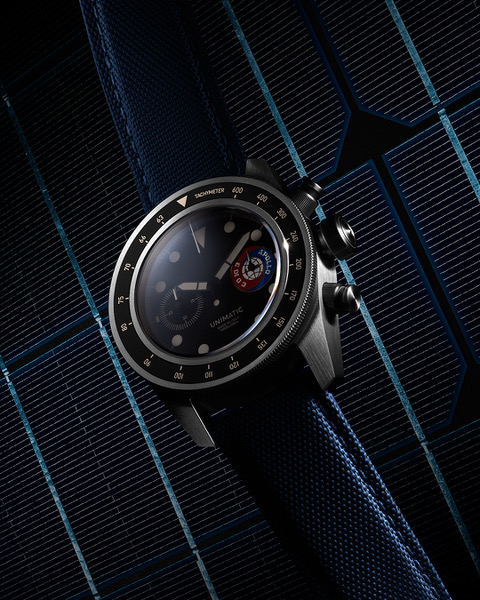 Also be sure to check our exclusive unboxing video at the top of the page, shot by yours truly, to get a better idea of this cool new timepiece.