Now they have launched what they say are their last quartz watches. And, they’re chronographs. Say hello to the Christopher Ward C65 Am 1 VEV and AM 2 VEV special edition watches. 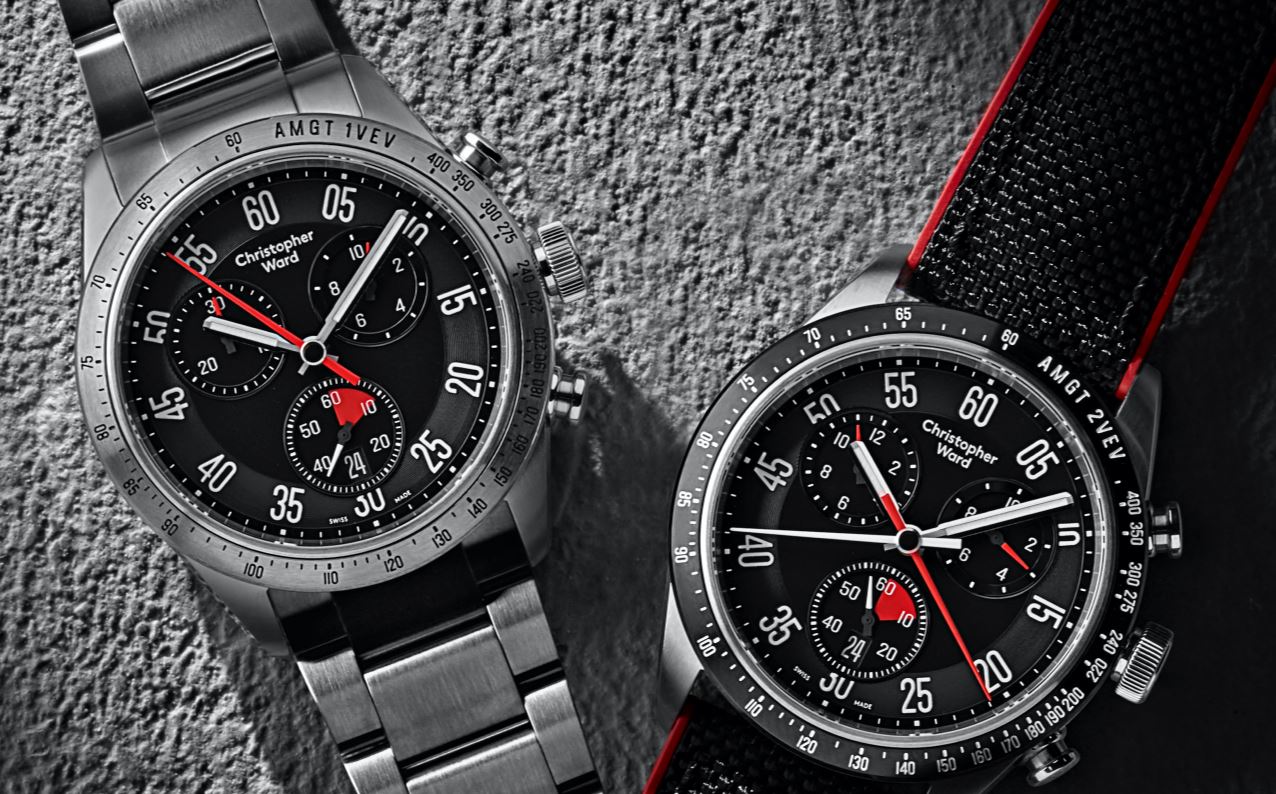 The Aston Martin DB4 GT Zagato was produced by Aston Martin/Zagato in the early 1960s. It was a lightened version of the DB 4 GT. 1 VEV was part of this limited series of cars and raced at Le Mans in 1961. If you are a petrol head then the DB 4 Zagatos and the racing versions are some of the prettiest cars made by Aston Martin from their great design period.

Christopher Ward has made watches inspired by 1 VEV before. In 2016 and 2019 they made watches in the currently defunct C9 motorsport line. The 2016 version had a piece of 1 VEV in the shape of its steering wheel. The 2019 version was the same watch but without the TMB piece of 1 VEV. Now they have returned to 1 VEV with different design and a quartz movement.

The C65 line is well established as the retro diver line. The design features a 41mm Light-catcher™ case with the addition of two chronograph pushers. The cases are 12.2 mm high with a 47.1 mm lug tip to lug tip length and a lug width of 22mm. The dial is a gloss black with three sub-dials. The six o’clock sub dial is the running seconds counter. It has a white minute track with a red sector between the 12 and 2 o’clock. This refers to the minimum RPM needed for a racing engine at tickover rather than the maximum RPM the engine can achieve. It’s a nice detail and shows the thought that has gone into these designs. This sub dial has a simple white hand reminiscent of that on the rev counter of 1 VEV. There is a neatly integrated date window at the 6 o’clock position. 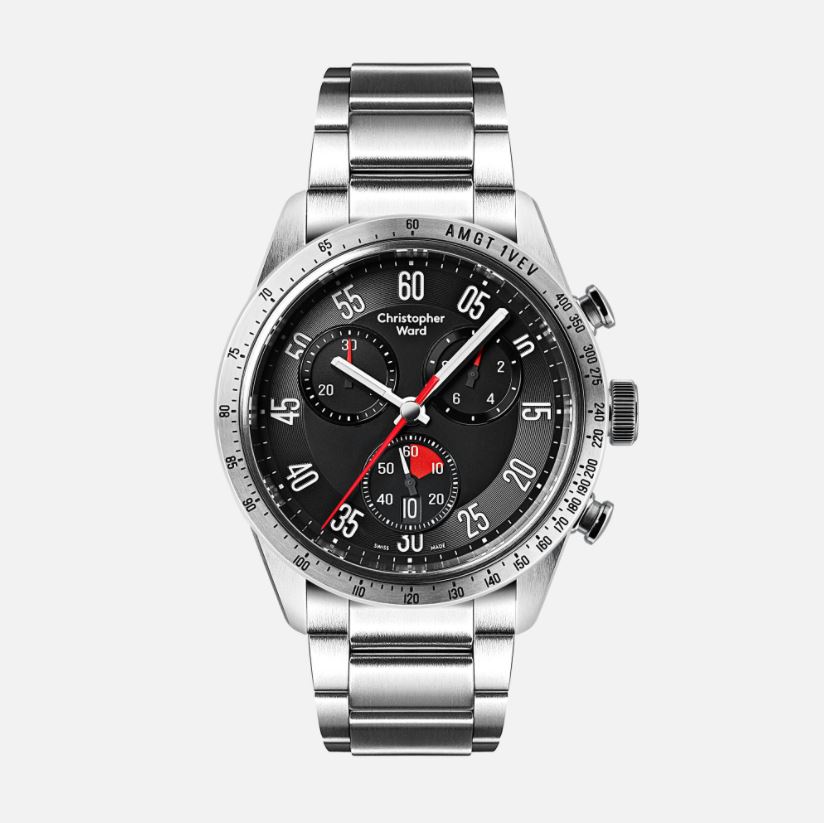 The remaining two sub dials are 10 o’clock and 2 o’clock. They maintain the aesthetic with white timing tracks but feature red indicator hands. There are printed numbers around the dial but these have adopted the flieger style minutes rather than house.

Christopher Ward don’t like to make the differences between the 1 VEV and 2 VEV models clear. They actually use different ETA movements. Stylistically they can be differentiated by the bezels 1 VEV has the stainless bezel whilst 2 VEV has the black bezel. 2 VEV also has four hands hanging from the central pinion rather than the three central hands of 1 VEV. To my eyes 1 VEV looks to be the more successful design as it is simpler and somehow purer than the four hander version. 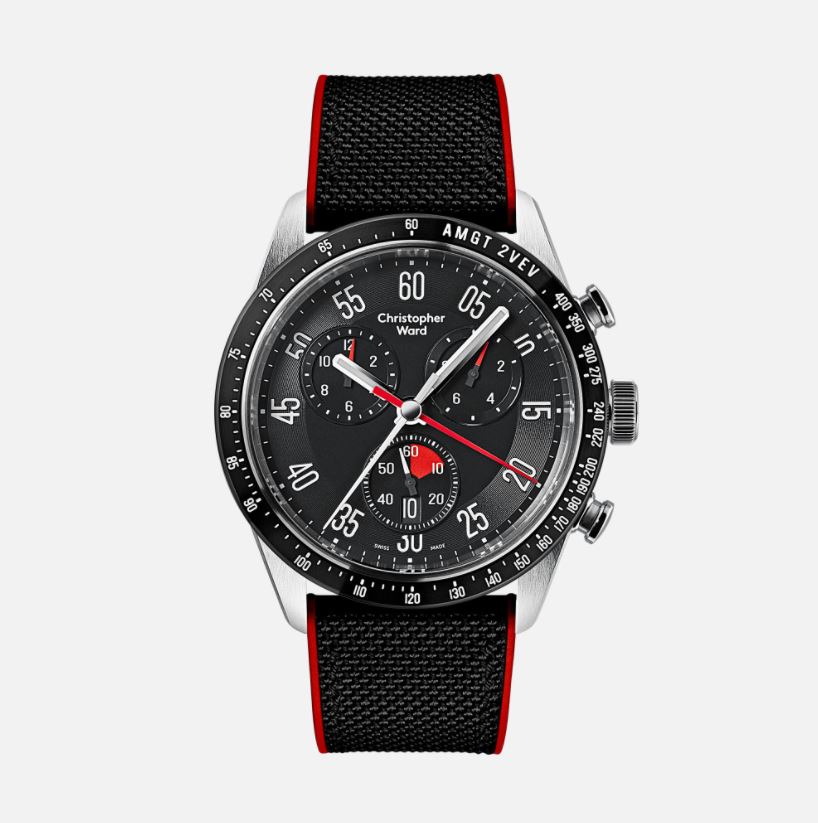 The hour, minute hands and/or running seconds hand are finished in white and follow the simple designs used in the C65 range. The timing hand is finished in red to match the sub dials.

The two versions 1 VEV and 2 VEV are distinguished by the colour of the bezel. 1 VEV has a stainless steel with a black tachymeter scale engraved on it. 2 VEV has a black bezel with a white Tachymeter scale.

The final surprise is the case back. Rather than a trident logo this case back has an engraved image of the wire wheels and central spinner from the racing cars. This is one of the nicest case backs seen on a Christopher Ward in a long time and ties the watch to 1 VEV and 2 VEV in an elegant way. 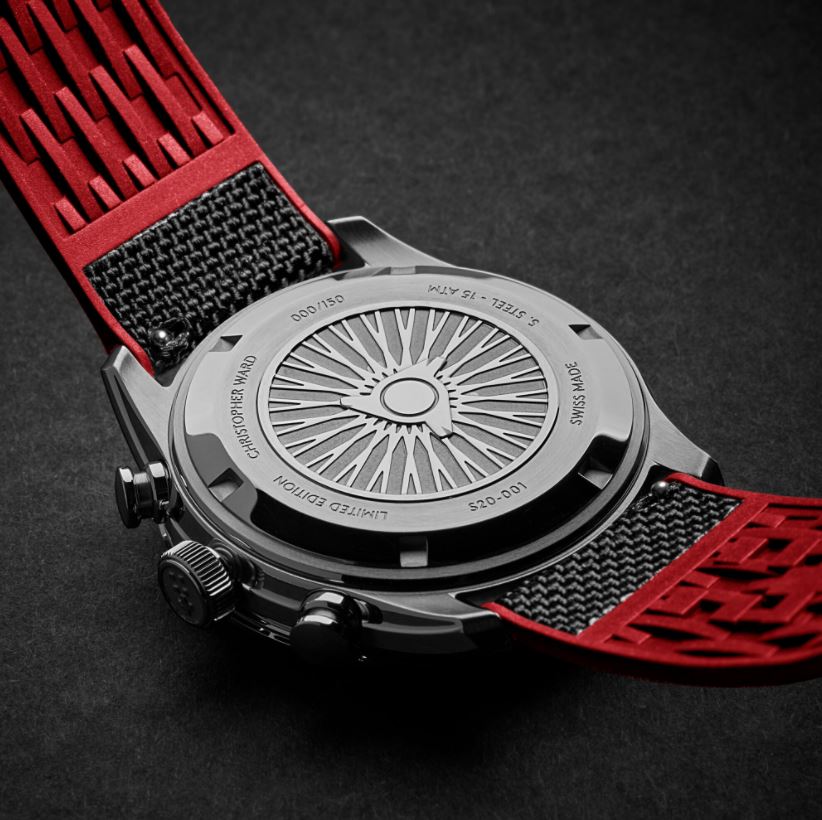 The C65 1 and 2 VEV watches use an ETA 251.274/1 (used in 2 VEV) and 251.233/1 (1 VEV)  thermally compensated quartz movement with 27 jewels and a battery life of 72 months. They are highly accurate movements with a claimed accuracy of +/- 15 seconds per year for the 233/1 and a +/1 10 seconds accuracy from the 274 (from Christopher Ward’s website). It features (deep breath) hour, minute, small seconds, date, stop second, 60 minute counter, 12 hour counter and a 1/10 second counter. Wow. It’s popular to look down on quartz movements but this is a very special movement which offers a lot of features and great accuracy. In 1 VEV and 2 VEV it is placed in an elegant case with one of the best motorsport inspired designs produced by Christopher Ward. 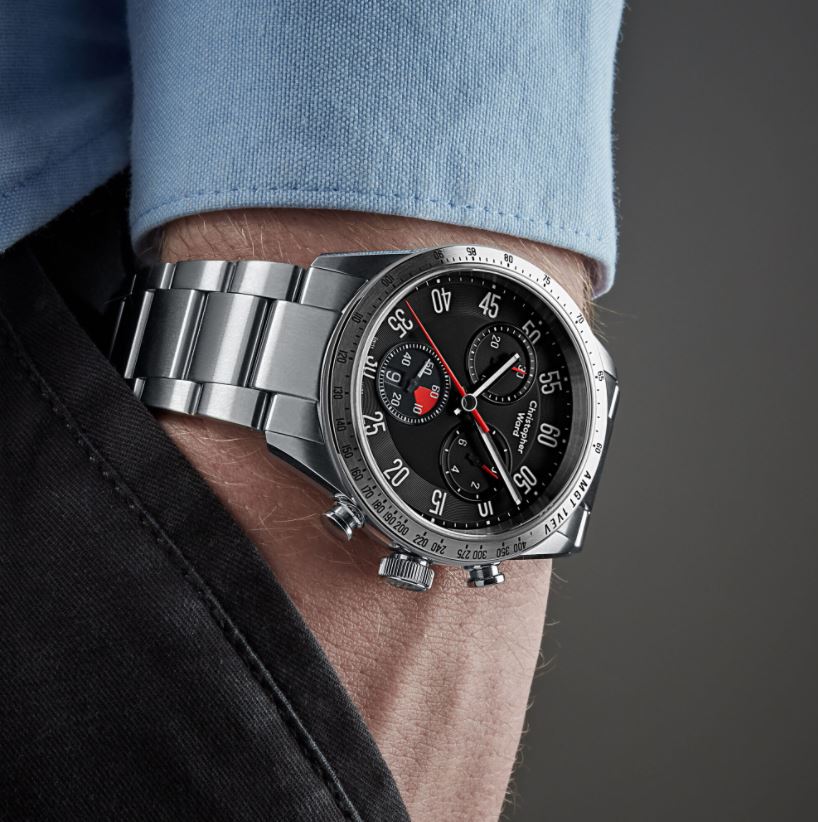 “No one expects the Spanish Inquisition.” No one expected this limited edition release from Christopher Ward and they’re quartz. The motorsport range was always a bit of an outlier for Christopher Ward. The designs were, to say the least, quirky and never really to my taste (C7 Apex aside). The range has been quietly de-emphasised as CW has focused on dive and retro dive watches.

With the C65 AM 1 VEV and 2 VEV watches Christopher Ward have finally got the motorsport design language right. The different designs for the sub dials and the placement of the them, combined with simple tachymeter scale bezels mean that these are very attractive, wearable watches. The designs are better without the grey-scale that can be added from 3 o’clock to six o’clock positions. Keep it simple works best for this type of watches. That there will be only 150 of each is a shame. I hope that these two point to a renaissance in motorsport design from Christopher Ward. Personally I’d go for 1 VEV as it has only three central hands and the design is purer and more legible for that reason. 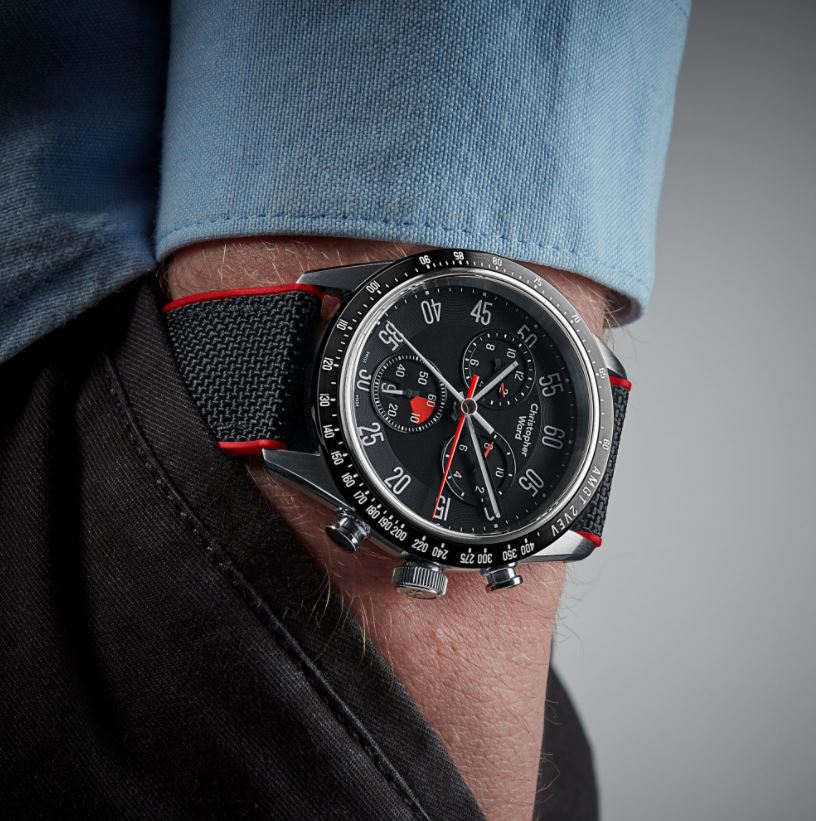