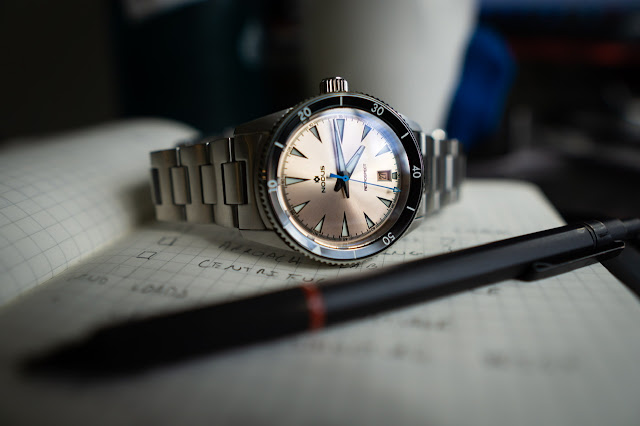 The Nodus Retrospect II is a vintage inspired diver produced by Nodus Watch Company as a follow up to the initially produced Retrospect I. The Retrospect II is a 200m water resistant modern dive watch with a heavy dose of lume and in your face style for the price tag of $450. During this production cycle there were a few dial variants from which, I chose the “Salmon Sky” dial. The dial is a beautiful champagne color that can fool the eye with a warm orange to a cool silver depending on the light. The other “Sky” variants include Stratus and Snow. Stratus being a fantastic icy blue and snow, a powerful white. The Retrospect II was announced to be discontinued by Nodus and will be presumably replaced by the Retrospect III.

Take a gander at the full list of specs below.

The case of the Retrospect II is substantial, the watch is big, thick, and sexy. Nothing like a phallus. The heft is largely the result of the 13.9mm thickness, my first impression was “damn, this is a full on chunky diver”. The long lug to lug dimension of 48mm allows the lugs to get back down to your wrist and flow nicely to the bracelet despite the case thickness. Both sides of the case are polished, along with the most extreme edges of the lugs. The tops of the lugs have a brushed finish and are drilled with lug holes. A thin stadium style fully lumed ceramic insert sits in the coin edge bezel. 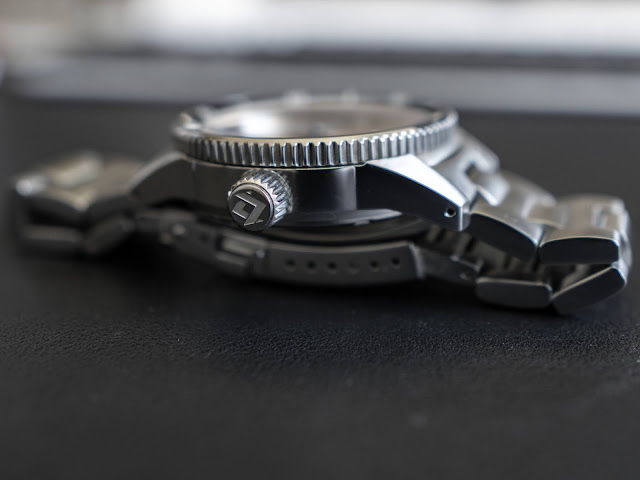 On the side of the case is a large unguarded screw down crown with the same coin edge finishing as the bezel. A screw down crown is something that can go wrong especially with smaller micro brands. The crown on the Retrospect II is fantastic. There is absolutely no issues with screwing this crown down, possibly the best I have had on a sub $1,000 watch. The lack of crown guards is definitely a case of addition by subtraction. Crown guards would have been in direct conflict to the 60’s diver style. One minor complaint on the crown is that it would have been nice to have the Nodus logo be lumed, similar to what was done on the Duality release. 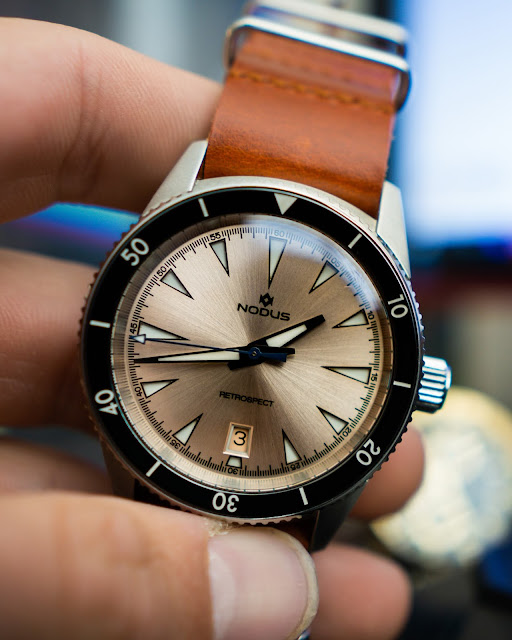 The absolute star of the show is the color burst salmon colored dial, dubbed, “Salmon Sky”. The indices are pointed triangular cutouts reminiscent of 60’ divers. The indices, hands, and full bezel are lumed with Super Lumi-Nova C3 XI. This watch is an absolute torch. The application of lume is so creative and forces you to want to interact with it. I work from home now and I find myself turning all the lights off during bathroom trips and charging the lume up just to gawk. 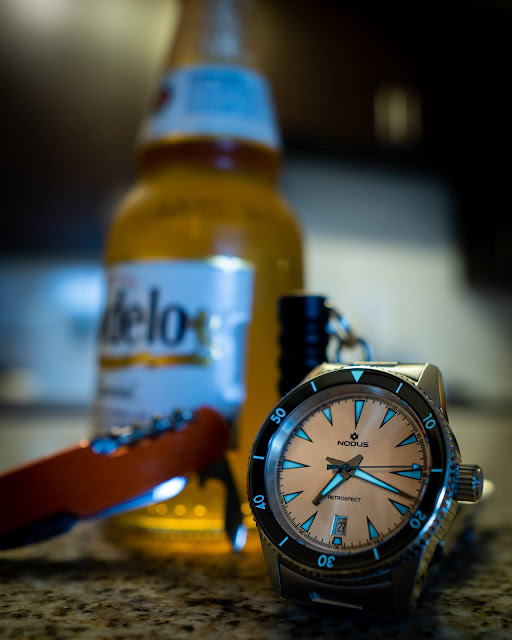 There is a date window at six, surrounded by a signature Nodus lumed perimeter. Beneath the dial is a color matched date wheel. Date applications, especially on a diver, can be a point of contention if not allotted the proper amount of care.  Gripes about symmetry echo on the internet about every bad 4:30 date on some otherwise beautiful watch. Nodus in particular, has taken up a quest to change the narrative. Their date windows are phenomenal. With each watch they put out, the thought and care that they take when designing dates just oozes through. It is obvious that the date is taken just as seriously as any other aspect of the watch, perhaps more. There is such a precedent of date windows looking like arse, so it probably takes even more effort to shuck the status quo and do something unique and thoughtful. Take a look for yourself and see if you think the addition of a date messes with the design language. 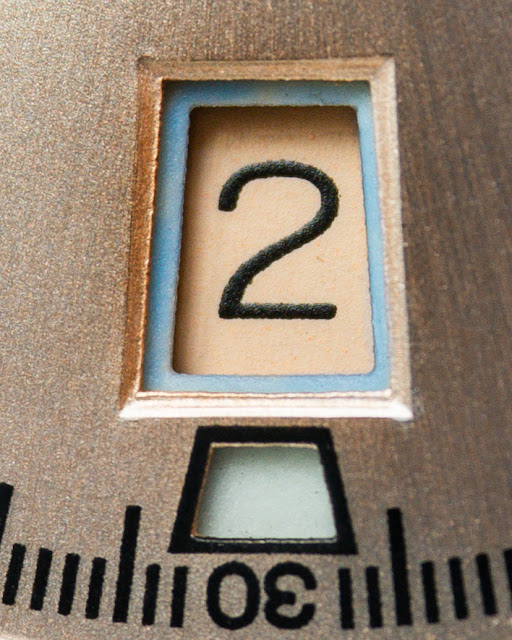 I mean… wow. You will regularly find dates on watches in the multi-thousand dollar range where it is painfully obvious that the date was a complete after thought. This watch is $450. The handset includes polished hour and minute hands than maintain the angular aesthetic. A pointed blue second hand is the commonality between the the different dial variants. The long thin second hand ends with a perfect triangle filled with a healthy deposit of lume. A really great way to tell how much a watch brand cares about what they are producing is to take a look at the finishing. So lets check it out, specifically the second hand. The second hand, in my opinion, is the best tell because it is the smallest and therefore the least likely to be looked at with great detail/criticism. We can compare it to a second hand of a major Swiss brand with a cool price tag of $8,100. Which brand do you think cares more about the appearance of their second hand. 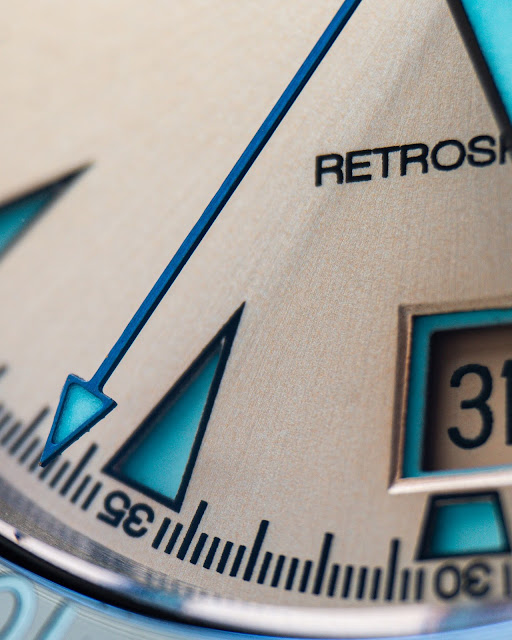 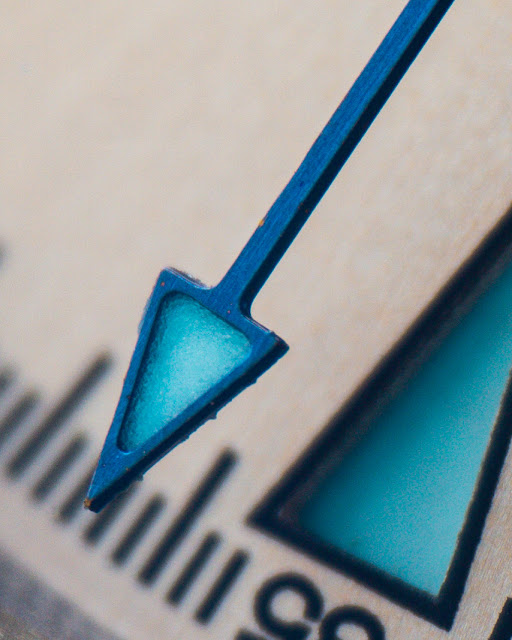 Below is the second hand on the aforementioned Swiss luxury brand at 18x the price of the Retrospect II. 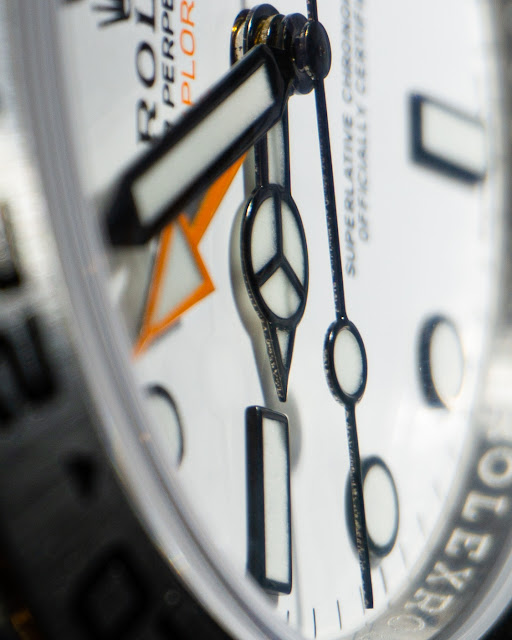 The above finishing is pretty much standard for that specific watch from that specific brand. I have confirmed a number of times. Likewise, the Retrospect II is one of three Nodi that I own and the finishing on each is reflective of the same high quality and care. Yes, the quality of finishing is not that of a Grand Seiko, Lange, or “insert luxury brand known for finishing” but again, the watch is $450. I would gladly spend my money here than on another sub $1,000 watch with a mis-aligned chapter ring.
Bracelet & Straps
Included with the watch was a stainless steel bracelet and a Nodus branded Barton Elite Silicone strap. Personally I find myself consistently coming back to the bracelet. I always love to have a bracelet to turn to, I’ll go through phases where everything I own will be on steel. The bracelet is a tapered H link with a folding Nodus branded locking clasp. 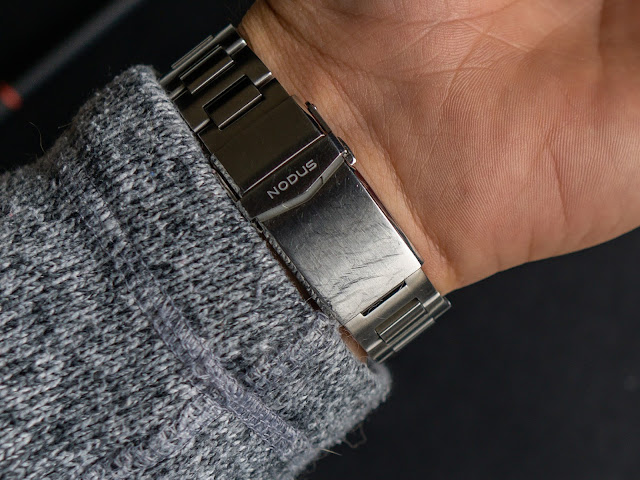 There are micro-adjustment holes on the clasp for fine tuning size, but, word from Nodus is there is soon to be a dive extension clasp that will be backwards compatible with their bracelets. These are expected to be launched with the next iteration of the Avalon. The bracelet articulates well around the wrist and has a substantial feel to it. The watch does not feel unbalanced on the tapered metal despite the significant heft of the case. My favorite feature of the bracelet is the small reveal of the polished case between the lugs. The end links curve down in addition to around the case which allow a sliver of the polished case to be revealed. 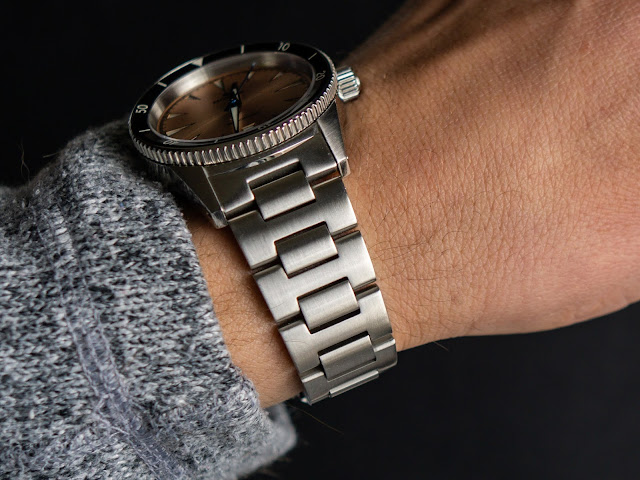 The drilled lugs allow easy swapping and I have enjoyed throwing this on a leather Nomad NATO style strap. Though still a diver, on leather this watch provides such a warm vibe, perfect for brightening up the winter months here in Denver. 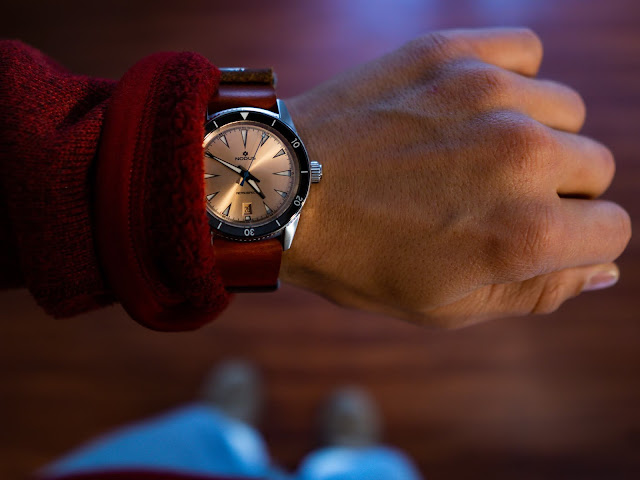 The addition of the Barton strap is great. This quickly became my go-to rock climbing strap. Really, any Barton Elite Silicone strap is great. I have a number of them in different styles and colors and for the price they punch way above their weigh in terms of quality.
Miscellaneous 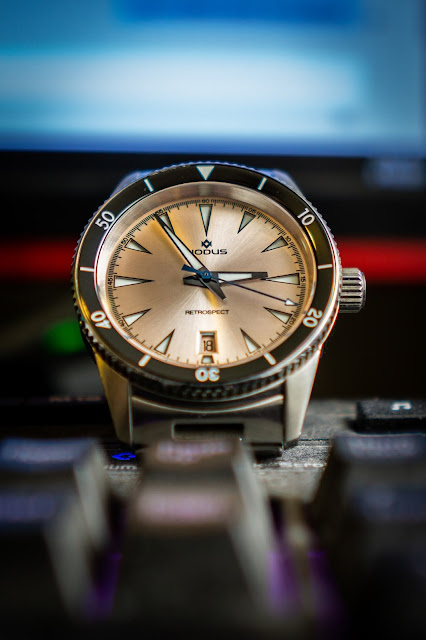 There are a couple of features that I feel are worth pointing out that maybe don’t fit nicely into discussions of the case, dial, or bracelet. Initially, I thought that the bezel would be difficult to turn when wet in a diving situation. Since then, I have had the opportunity to this watch underwater and was pleasantly mistaken. The bezel is a dream to use, incredibly firm and precise without being difficult to turn. Unrelated to the bezel I would like to point out the extra care Nodus takes with the movement. Inside this watch is a Seiko NH35. The NH35 is found in many microbrands in this price range and is regarded as a “workhorse” movement, whatever that means. What Nodus does that sets them apart from most others is upon receiving the movement they regulate it in four positions once placing it in the case. If you are unsure what this means here is a brief explanation and why you should care. The watch will be placed flat dial up, timed for a day and then tinkered with to help improve the accuracy. This process is repeated in the following positions crown up, 12hr down, and crown down. When messing with any single position, potentially it may affect the accuracy in the subsequent positions. Due to this ripple effect, regulating a watch is often a time consuming iterative process. For a brand with four employees, three at the time of this release, this is a monumental task. Nodus regulates all of their watches ahead of shipping. They will also take a watch back in to check it out should it not be running correctly. If you are anal about timing and tracking your watches accuracy like me, this is greatly appreciated.
Conclusions
The Nodus Retrospect II has blown me away with the amount of care and personality the designers were able to show through the watch. Looking at the watch invokes so much warmth and borderline nostalgia… or maybe… retrospection? Warm tropical days free diving off a sandy beach somewhere in the Caribbean. Dark nights lit by lume sharing wine with loved ones. Art can be described as the invocation of emotion, I am hard pressed not to simply describe the Retrospect II as a work of art. Below is one of my favorite photos that I’ve taken of the Retrospect II, the reason being it’s the closest I’ve come to capturing that feeling. Hopefully the photograph does a decent job portraying the whole vibe that is this watch. 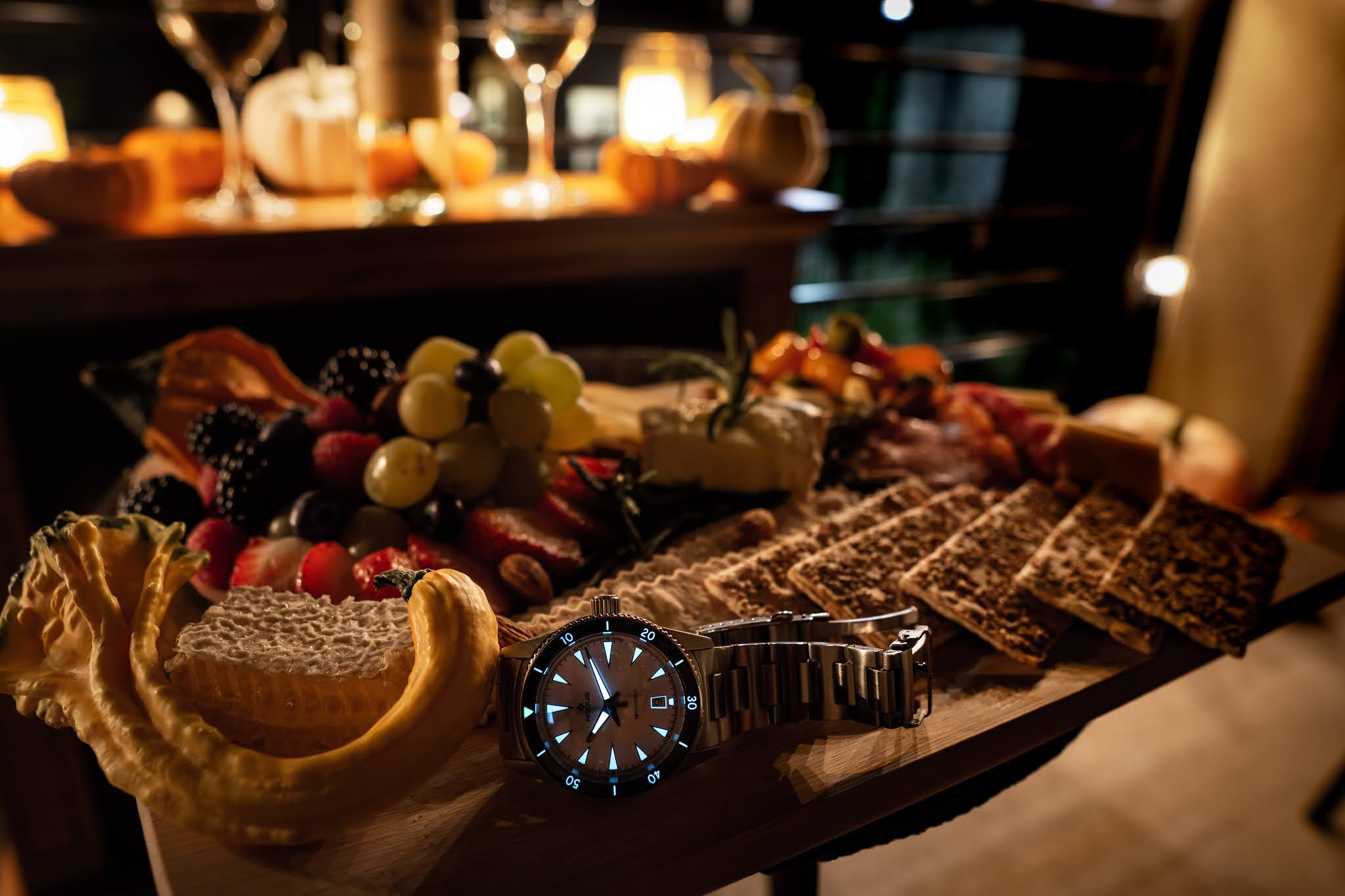 In the words of my favorite non-Scottish, non-American podcast about watches KC&JonJon, BUY. The watch world and community is better when there is innovators like Nodus pushing the boundaries. As enthusiasts we should support them with a vigor that is reflective of how special these watches are. 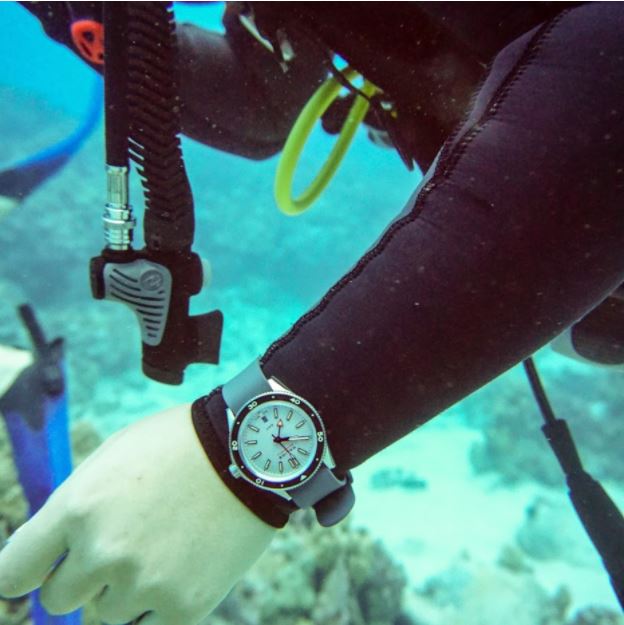 Frank is a contributing writer who spends his days fighting gravity and architects as a structural engineer. He lives in Colorado and spends his free time climbing, diving, and with general mountaineering activities. He can be found on instagram @frendymgee for more watch photography.