If you head over to Kickstarter right now and search for “watch”, you will be inundated with 4,938 projects. From the interesting and the insane (a coffin-shaped watch with a tourbillon) to the fairly ridiculous (a watch filled with hand sanitizer), to the thousands of Daniel Wellington wannabes, it looks like everyone and their grandmother and also that guy they kinda knew at university wants to make a watch these days. I imagine it must be tough for a fledgling brand to find a way to stand out from that sizable crowd and meet their funding goals. 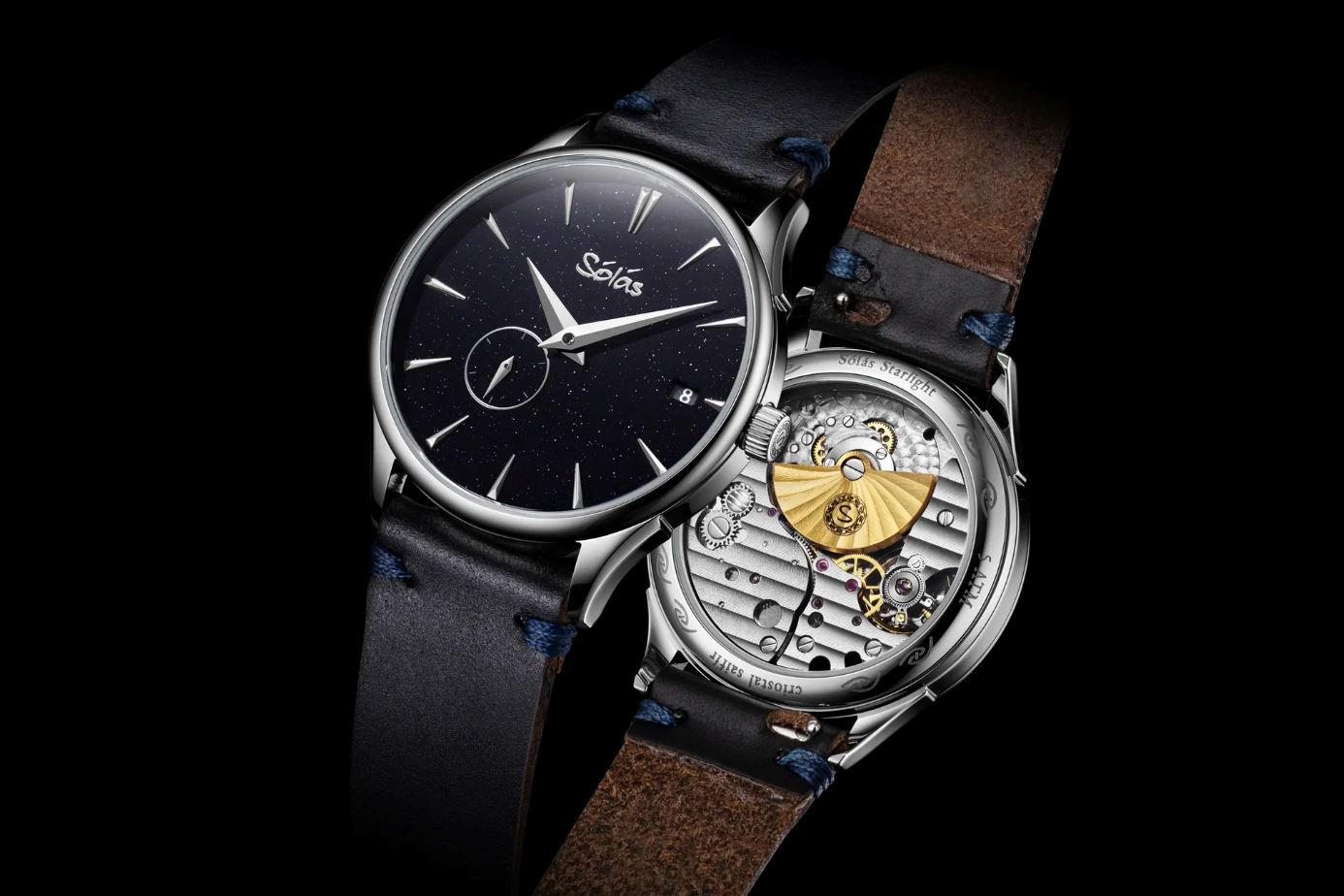 The new Irish brand, Sólás, seems to have found a way to climb above all that noise, and is offering a pretty standout product as their very first model, the Starlight. Sólás founder, Diyu Wu, had an experience similar to many inventors and creators since the dawn of time; if what you want or need isn’t available, just make it yourself! A longtime watch enthusiast and collector, he had become fascinated with the micro-rotor movement, and its ability to offer all the benefits of an automatic movement, while retaining the aesthetic appeal of a hand-wound. The downside of these movements, until now, is that they are pretty exclusively in the realm of your high-end and very expensive watch brands. After years of waiting and hoping that someone would bring to market an affordable option, he decided to just take the reins and do it himself. 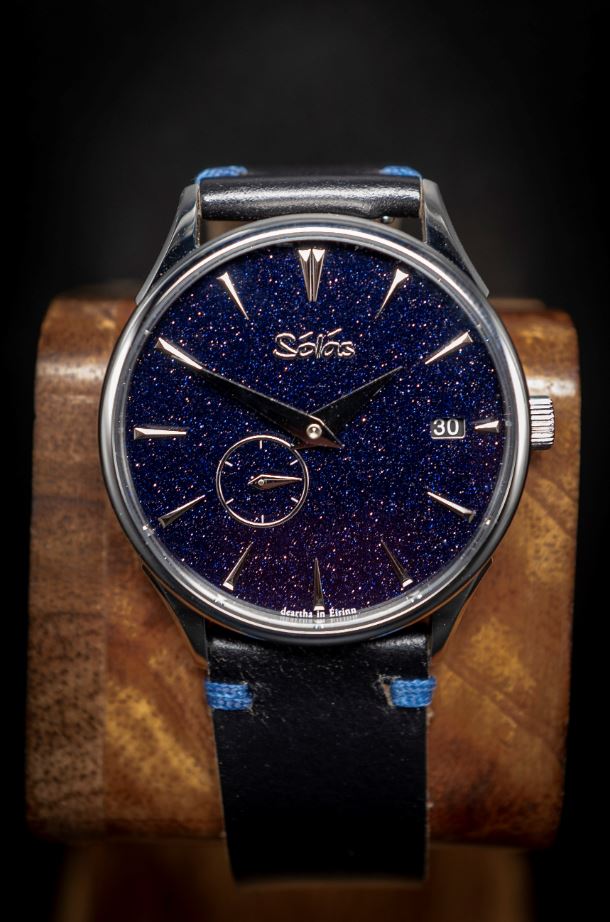 Diyu Wu had an idea, now he just needed a name. Sólás is the Irish-language word for solace and represented an aspiration for the new brand – having an item that could bring comfort and joy to its wearer. Let’s jump right in and see if they have accomplished that goal.

First impressions on unpacking this watch were very good. It looks and feels like a watch that would cost a lot more than the planned €329 Kickstarter early-bird price. Since this was a review unit, I didn’t get the retail packaging but Sólás says it will be minimally designed to cut down on waste and make the watch the main event. Without a doubt the first thing you will notice upon picking up this piece is the shimmer and shine of the aventurine dial, so let’s talk about that first. 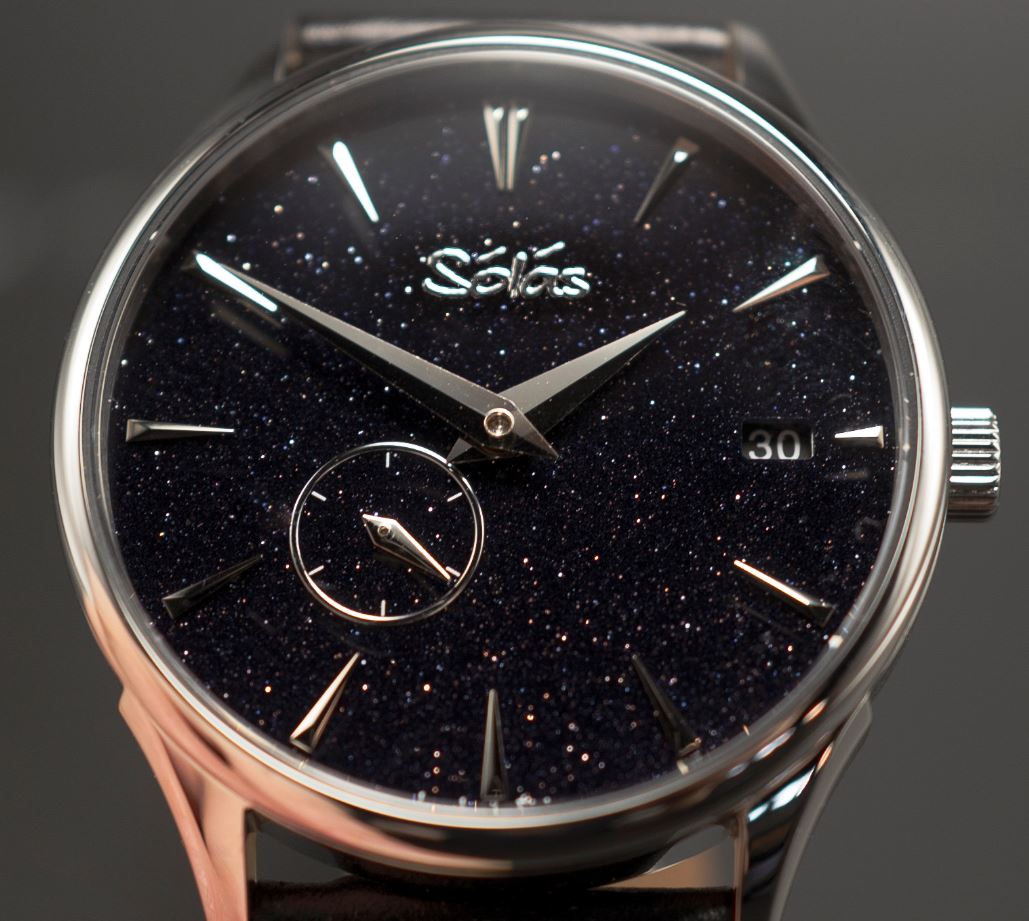 Aventurine glass is made using transparent red copper ruby glass and a purpurin glass, which is brown to deep red in color. When cobalt is substituted for copper, the glass turns blue, creating the type of aventurine primarily used in wristwatches. Wu admits that those unfamiliar with the material could mistake it for a “cheap glitter” at very first glance, and while I can see that, it was not my experience at all. It has a richness and depth that is all its own and changes drastically depending on angle and available light. I tried to represent a few different looks it can take on in the photos but these don’t begin to do it justice. Under the right conditions, it truly gives you the feeling of gazing out into the universe. If that is the kind of thing that appeals to you, it’s pretty spectacular. 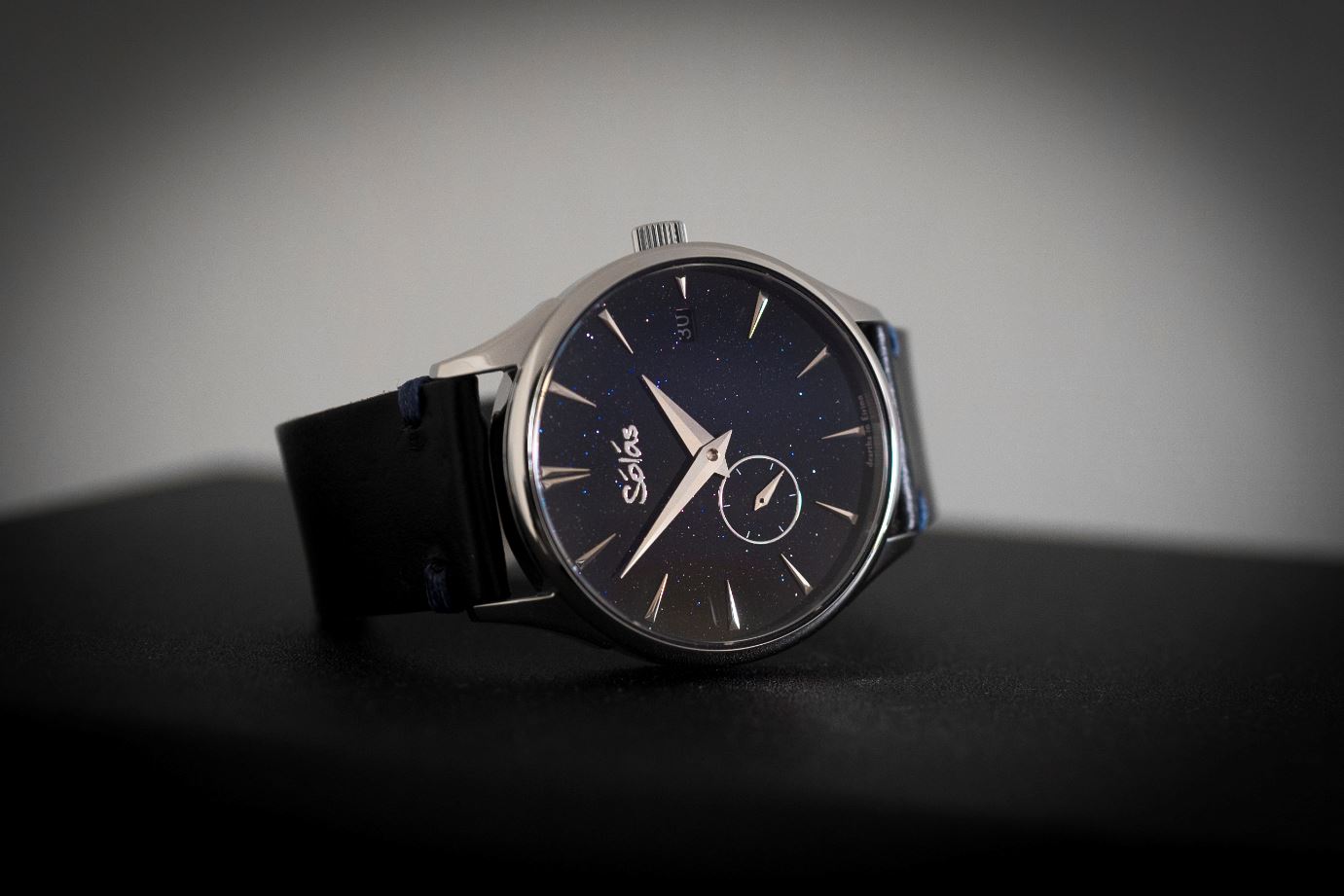 Aventurine is a tricky and fragile material to work with, especially at watch dial-levels of thinness, which is probably partially why it is usually only offered by high-end luxury brands like Omega, Ulysse Nardin, Jaeger-LeCoultre, Bulgari, Audemars Piguet and Jaquet Droz. Suppliers need to order an extra 20% or more of materials just to account for the cracks that occur when drilling into and working with the material. It is a bold and risky choice for a brand’s very first watch, being a material that is unknown to most consumers, and more expensive to work with, but it’s one that Sólás is passionate about and I give them great kudos for following that passion. 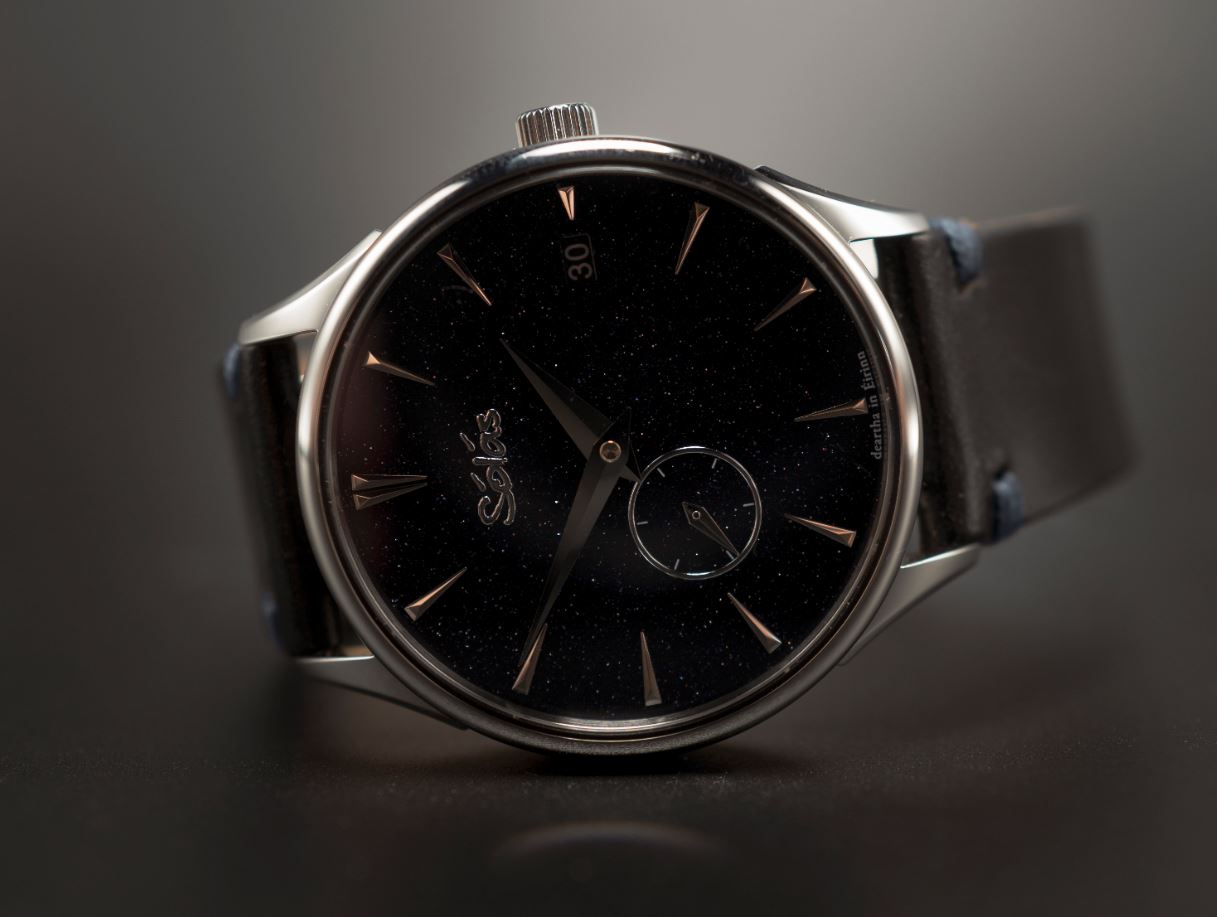 The aventurine is inside a nicely-polished, 38mm diameter stainless steel case featuring some well-designed and finished lugs which are raised where they meet the case. The whole package is a mere 9.7mm thick, with a lug-to-lug measurement of 44mm. The dauphine hands are highly polished and match with the triangular indices. The sub-seconds hand is interestingly placed at about the 7:30 position, and there is a date window at 3 o’clock. The choice of triangular indices and hands and even the lugs was a reference to the Irish fadas (accents) that adorn the vowels in Sólás.

This does lead me to my only real complaint about the watch. The glimmery nature of aventurine, coupled with the highly polished hour and minute hands and case, make it a bit hard to read from some angles, and damn-near impossible to photograph well. If you happen to be wearing a black shirt, or holding a black camera, that black reflects completely from the hands and they essentially disappear into the black void of space. It’s a minor gripe, as a slight tilt of angle sorts it out and it becomes very legible, but one that 100% legibility nerds out there might want to take note of. 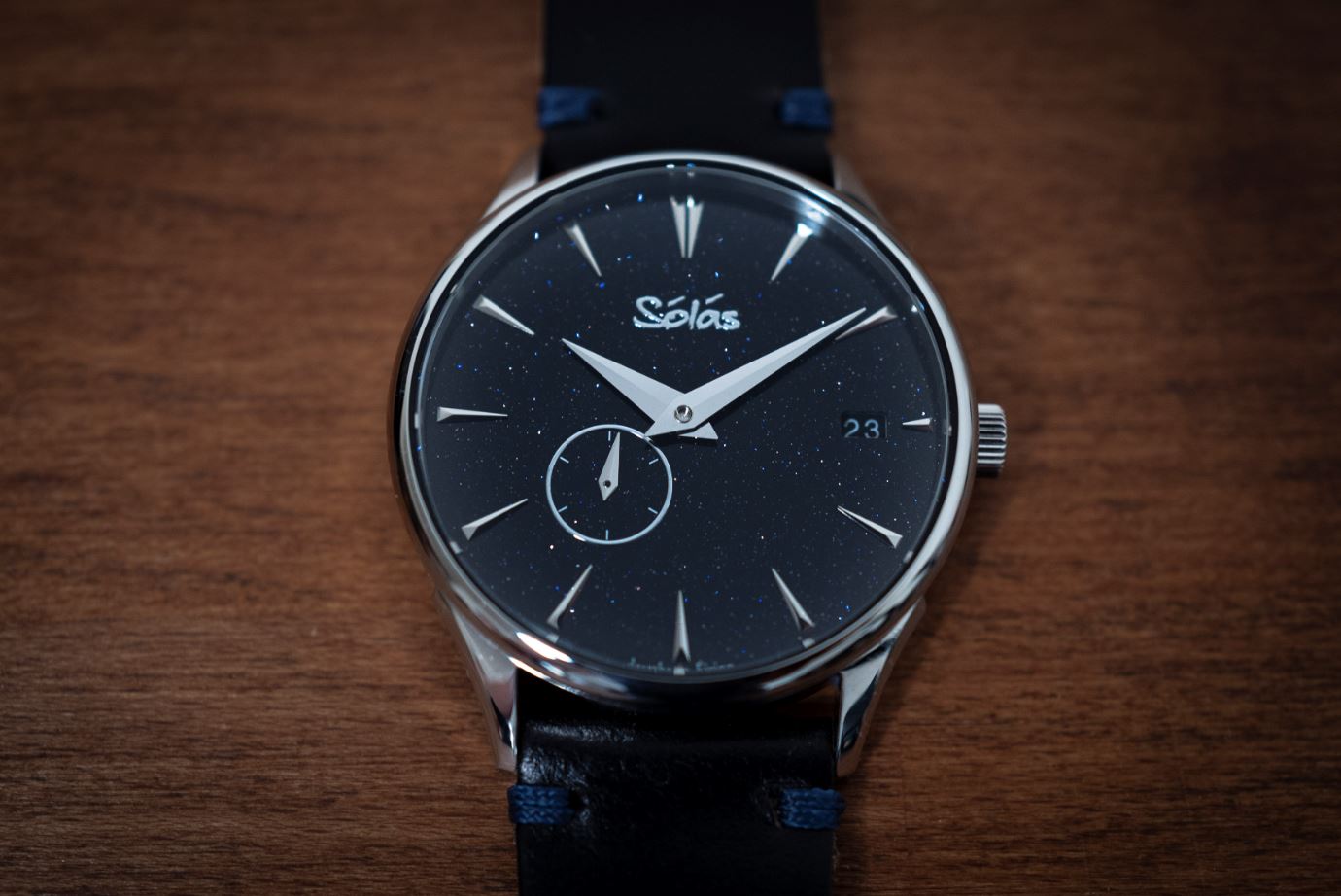 Now on to the main event: the micro-rotor movement. The Sólás Starlight uses the Hangzhou 5000A movement. The Hangzhou Watch Company has been making watches and movements in its namesake city since the early 1970s, but I have never heard of them until this watch made its way to me. A quick perusal of their website shows lots of different movements, from GMTs to tourbillons to moonphases, with finishes from the basic to the quite elaborate. Sadly since it is all in Chinese and not the most user-friendly website I have ever seen, I cant glean much more information than what I can see in the pictures. 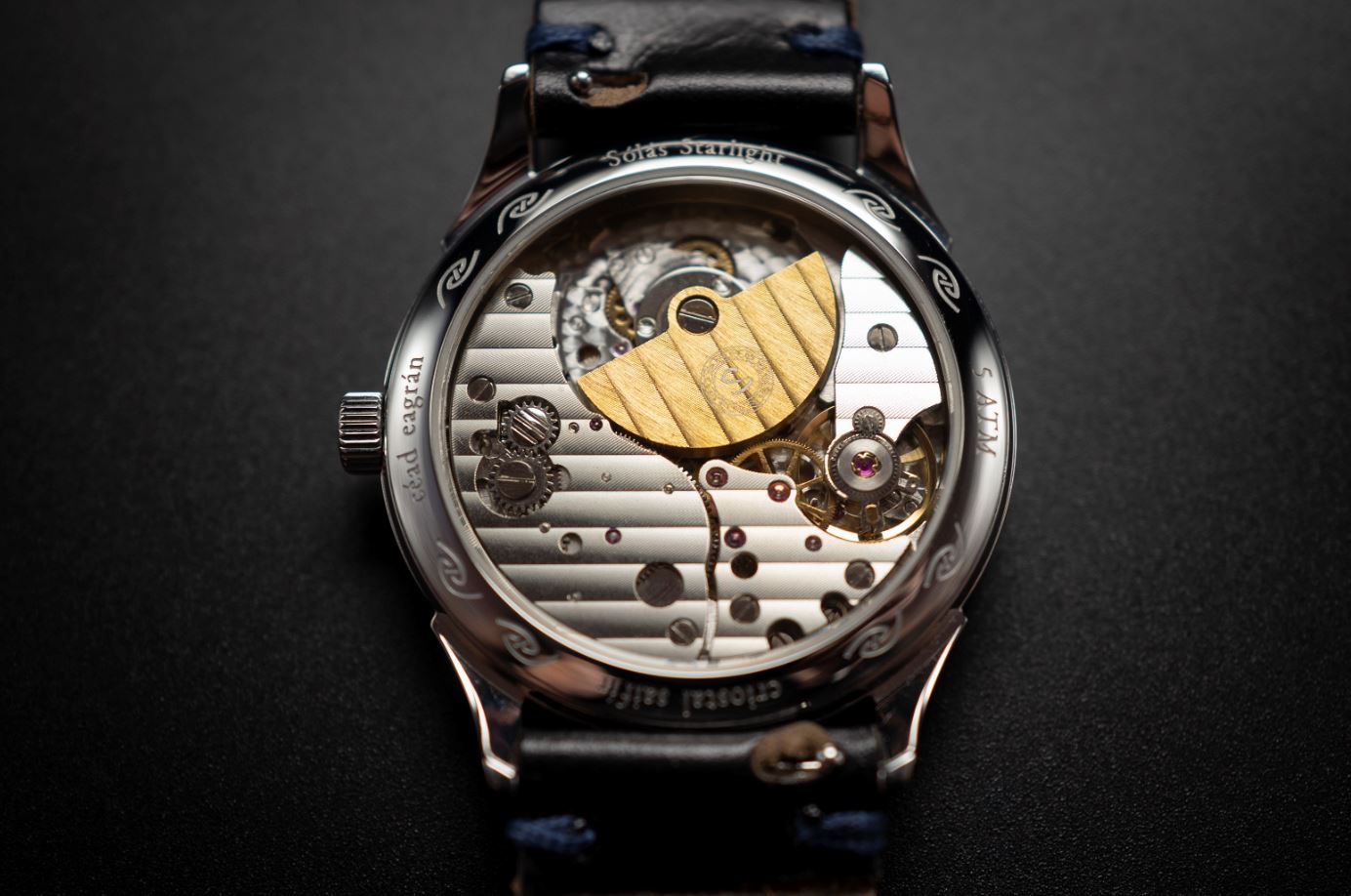 The 500A is a 28800bph movement with a 42 hour power reserve and does not hack. It is powered up by the lovely little micro-rotor. Aside from being diminutive enough that it allows you to see all the other moving parts of the movement, another benefit of the micro-rotor is that it is built into the movement rather than on top of it like a traditional automatic rotor. This allows a level of thinness not usually seen in standard automatics. Since the movement is on such display, the finishing is of the utmost importance, and the 500A does not disappoint. From the Geneva stripes to the perlage to the nicely bevelled edges, it is a very beautiful movement and one I looked at over and over again, as I’m sure Sólás intended. Only under a loupe do you see any imperfections at all, and even then just a single minor nick in a screw sink. At this price point I think that is a pretty remarkable achievement. I know people have preconceived notions and taboos about Chinese-made movements, and whether or not those are justified, I think Hangzhou got it right here. I was not able to test the accuracy, and I cannot find any specs for it anywhere, but as long as it meets a reasonable, Seiko-esqe ±20spd, I’d say this is an excellent value proposition. The movement is protected with a sapphire display caseback and surrounded by engravings around the perimeter, all in Irish, completing the Emerald Isle theme. They translate as follows for anyone interested: Sólás – Solace; deartha in Éirinn – designed in Ireland; criostal saifír – sapphire crystal; ceád eagrán – inaugural edition.

The watch ships on a very soft handmade Horween leather strap, crafted by a leatherworker in Wicklow, Ireland. While manufacturing watch components in Ireland was not possible, this is one way Sólás is able to keep this piece as Irish as possible. An interesting addition is an excellent deployant clasp on the leather strap, very similar to the one Omega uses, and rarely seen at this price point. It’s an excellent addition and one I am sure that watch people will appreciate. 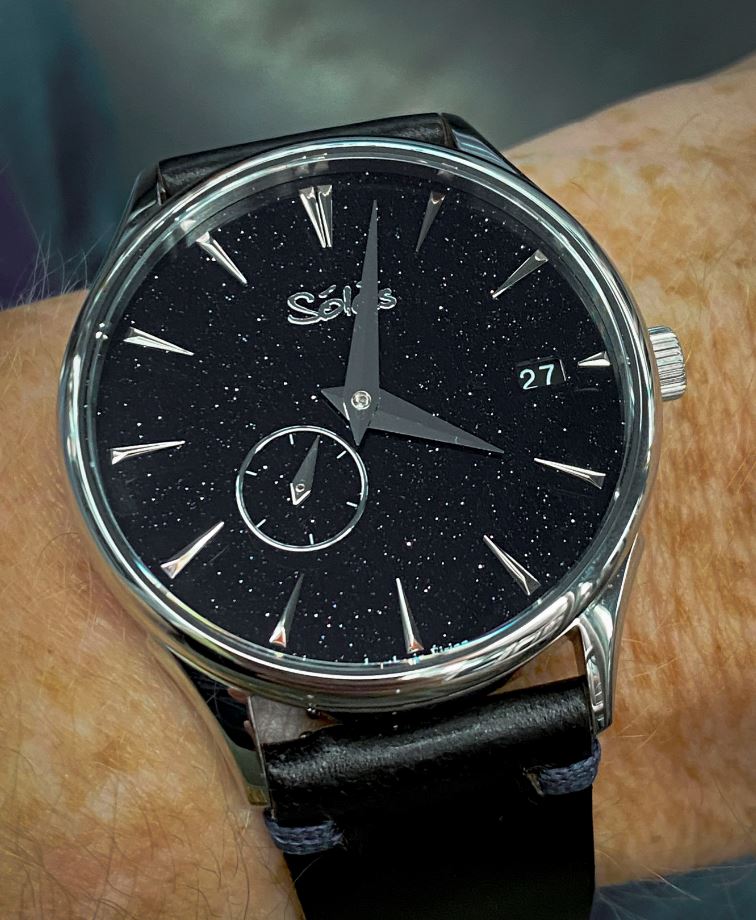 Overall this is a beautiful timepiece, at a fantastic price point, with multiple ambitious features that set it ahead in the pack, not only on Kickstarter, but in the “micro-brand” space as a whole. Founder Diyu Wu has a seemingly tireless passion for watches of all kinds and is a genuinely nice and congenial fellow and I cannot see him stopping anytime soon. I, for one, look forward to seeing what kinds of exciting things Sólás will do next.