Greetings watch and role-playing game nerds! Here at Scottish Watches Towers we thought up a little game that you might want to play with us. Watch Brand Warhammer. Pick an alignment for any watch brands as follows 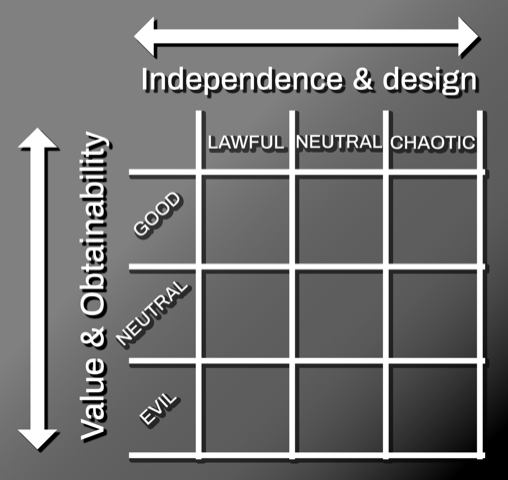 The rules are quite basic.

If the brand is part of a larger group (i.e. Omega as part of the Swatch Group) then you must be lawful or neutral. If your brand is independent (i.e. Rolex) then then you can only be neutral or chaotic. Other factors on this axis could be the braveness of the design but feel free to be creative.

The good-evil axis is pretty self-explanatory play with it as much as you like. Good and Evil can be defined in many ways.

My personal choices follow, accompanied by a Warhammer character profile chosen by SW friend Chris @watches_whiskey_coffee on Instagram. Apart from being a watch enthusiast he is a talented Warhammer figure artist. The details on his models are astounding. 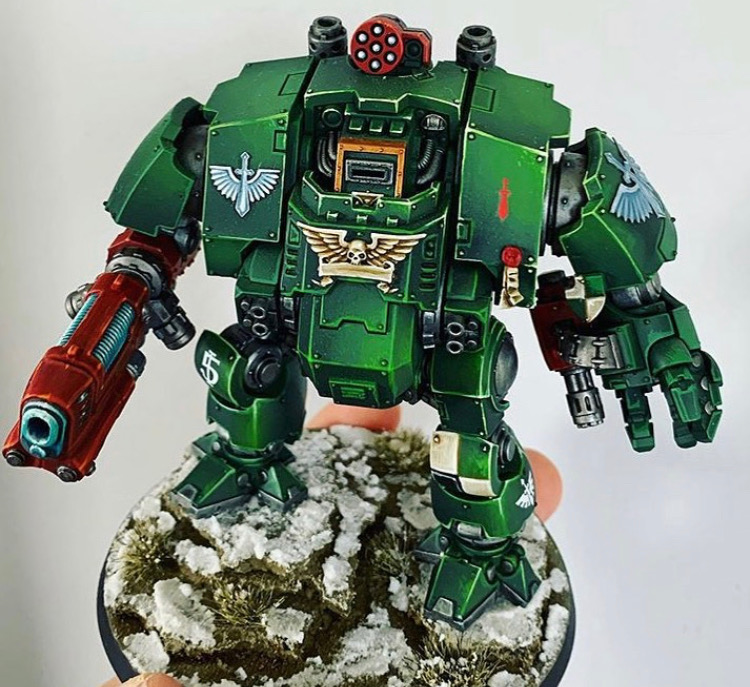 LET THE GAME BEGIN! AND REMEMEMBER IT’S JUST FOR FUN! 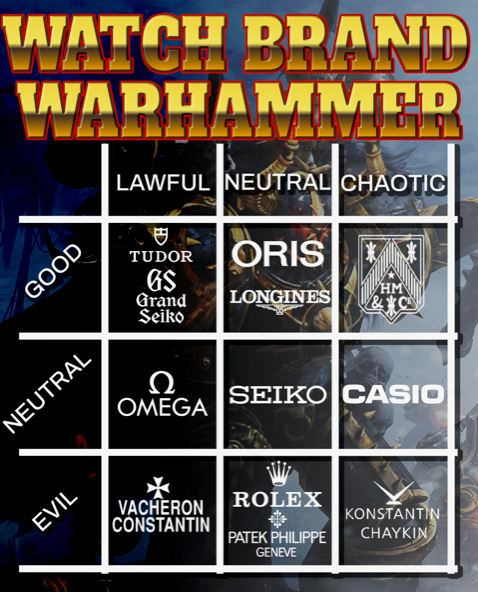 Tudor and G.S. have always been among my most respected brands. Even if they are closely tied to their respective holding companies their offering is unique, of impressive quality, available and fairly priced. You’d be hard pressed to find a better watch in their respective price brackets. Designs are quite conservative and herald back to past glories with modern tech.

The Grey Knights are a secret chapter of Space Marines specifically tasked with combating the daemonic entities of the Warp the foul demons unleashed on the universe by Chaos.They have the honour of being implanted with gene-seed engineered directly from the genome of the Emperor Himself.

An independent and a group brand here. Oris is one of the main indie watch brands on the market. It has a long and illustrious heritage. Its lines interesting and sometimes very brave in some designs (the ProPilot X is one such example). Longines shares a similar heritage and, despite being linked to the Swatch Group is quite a free sprit in terms of design and marketing. Value for money for both brands is outstanding.

The Space Marines are the Emperors own army, and the poster boys of Warhammer 40,000. Each chapter genetically engineered from the Gene-seed of their Primarch, the Emperor’s only sons, they are righteous and loyal, but although fighting for the good of the Imperium they have been known to commit genocide on numerous occasions if they see the taint of chaos developing on a planet. The story twists when half of the Emperor’s son’s turned against him in what is known as The Horus Heresy, that is the birth of Chaos!

If there’s a chaotic and good CEO it’s Edouard Meylan! And his watches express this to the nth degree. If someone else has done it, Moser won’t! They even made the Swiss mad watch with a case made of real swiss cheese! 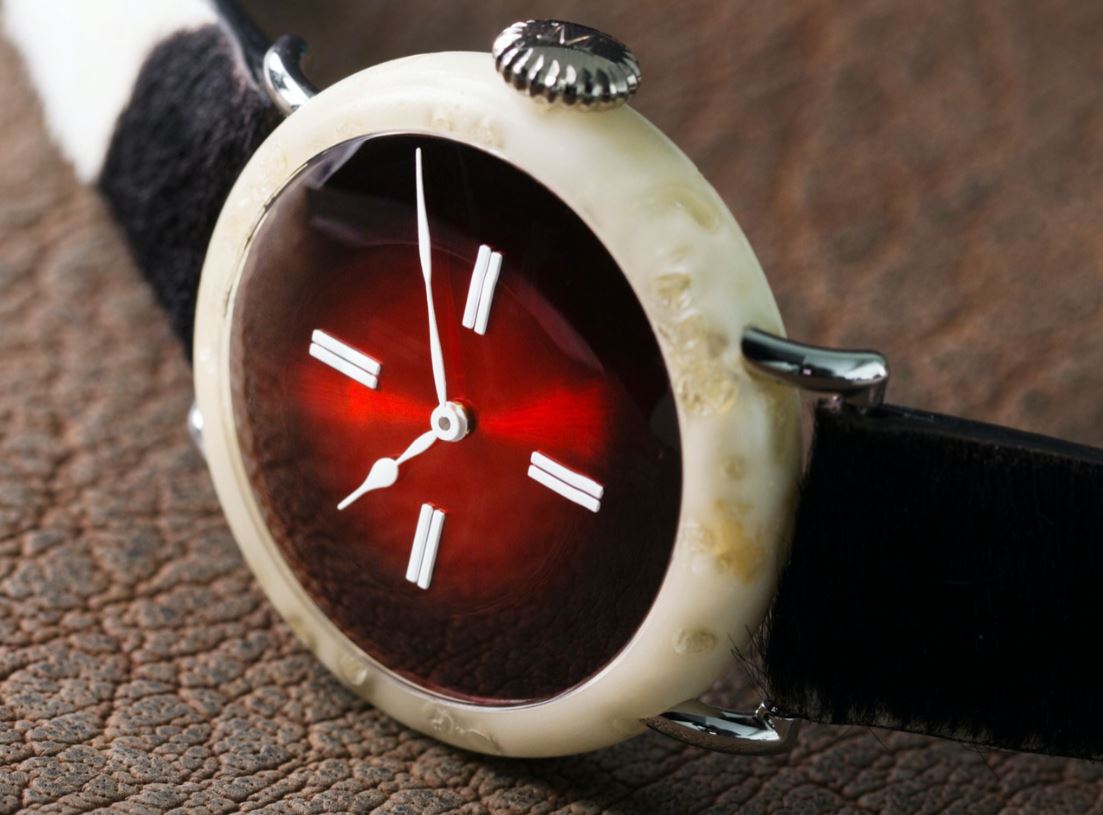 The Mechanicum are the Armoury of the imperium, based on the Forge world of Mars, although loyalist they have regularly been known to be fulfilling their own agenda’s and during the heresy a large proportion of the Mechanicum were twisted by the taint of Chaos and forged The Dark Mechanicum.

Two letters of the Greek alphabet. Omega sticks mostly to its rules. Its main products have been released in many many similar iterations or special editions, some quite outrageously priced. It’s mainstay, the Speedmaster, is a watch with a faithful following, and is aspired to by many collectors. Though they are playing the “been to the moon” card a bit too much!

The Tau are a relatively young race, but their technology has surpassed almost every other race with the exception of maybe the Aeldari. Their battlecry is For the Greater Good. They will fight alongside good and evil aslong as they perceive that the side they fight on will result in the greater good of the universe. 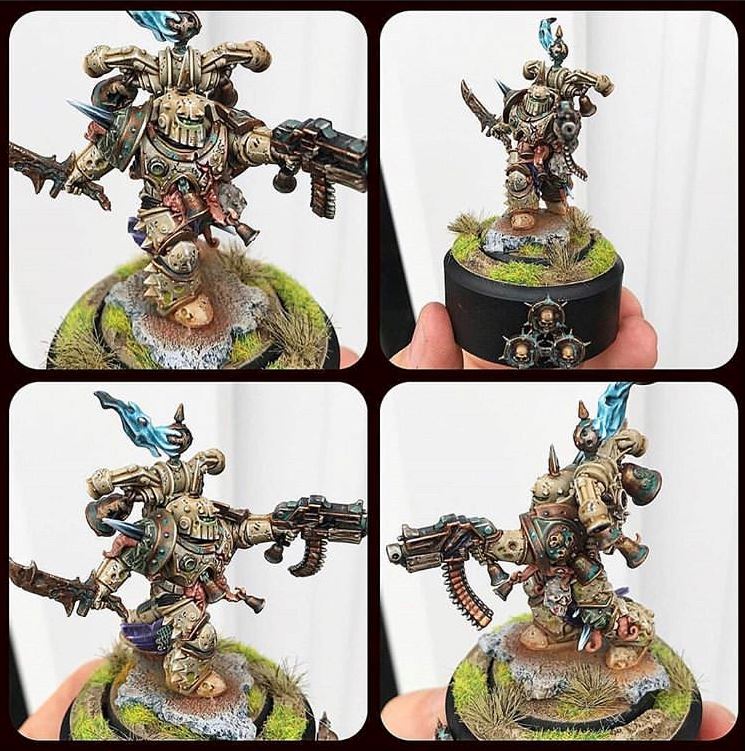 Seiko is, to my eyes at least, the most balanced of all the brands. In their range there is something for everybody, from the affordable 5 series, all the way through to luxury pieces powered by the iconic Spring Drive movement. Of late they are turning a bit to the evil side because of the way they are pricing their lines, but for now still I believe Seiko to be the power that brings balance to the entire watch world. Their designs, while varied, stick mostly to tradition with notable exceptions ( the latest 5 series Street Fighter Limited Edition comes to mind)

The Aeldari are the old ones, Elves of the future and they ruled the Galaxy long long ago. They have become a largely extinct race now, building massive bone constructs to put the souls of fallen soldiers in so that they can live on and continue fighting for the survival of the Aeldari.

In a similar vein to Seiko, Casio offers a wide range of styles and prices, but their designs may not be everyone’s taste. Chaos is the keyword here: Casio has done them all, calculator watches, remote control watches, game watches,  field watches,  data bank watches, tough watches and all manner of case styles and materials. Prices range from free (you probably found one in a packet of corn flakes at some time) to over 70K $ for the 18k solid gold 5000 series G-Shock. Even Bill Gates wears one so if it’s good enough for him it’s good enough for you, you cheapskate!

Orks are alive purely to fight. They are essentially living fungus, green and grown like mushrooms. They are huge beasts and love nothing more than fighting and killing… for no particular reason. 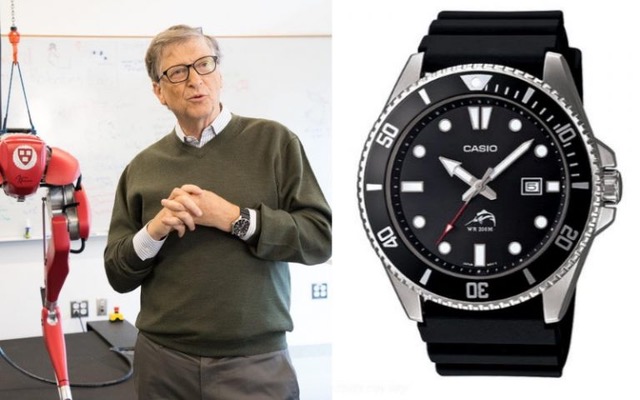 VC is the “unobtanium” of the Richemont Group. The waiting lists for mere mortals on their steel Overseas line of watches is longer than Jason Momoa’s hair. You could get one earlier on the grey market but you would have to sell most of your bodily organs to fund the purchase.  Designs are elegant, with some pieces having exquisitely hand painted dials.

Necrons are the oldest race, essentially they are space Egyptians, with hieroglyphs and huge pyramid like constructs. They were promised eternal life by their god the C’Tan but instead their souls were trapped in living-metal robot body’s for all of eternity.

Rolex and Patek, two very different independent brands, with one goal, to be the ultimate Status Symbol watch. As with VC, steel “sports” pieces are impossible to obtain at list prices. Control over supply is second to none. The difference between the two is rarity: no one knows the exact numbers but Patek’s output is at least an order of magnitude lower than Rolex who’s timepieces are mostly mass produced by robots and finished by hand. So Patek’s are kind of rare, Rolexes are “faux” rare and hard to obtain if you’re just part of the riffraff……that’s evil.

Tyranids are like the aliens from starship troopers, they are relentless hordes of beast with sharp talons and bone carapace on their backs, spitting corrosive venom and killing anything unlucky enough to be in their path.

I’ve got nothing against KC but they made the Joker line of watches and you can’t get any more evil than that! I’d be afraid to wear such a watch in the fear that it might kill me in my sleep!

Chaos, the once loyal army and primarch sons of the emperor these legions turned their back on the Emperor and their leader Horus the warmaster greatest son of the emperor turned on his own father and challenged him one on one.  Horus was struck down at the hands of his father, but he wounded him so badly the Emperor’s body is now in stasis, kept alive by a mechanical throne. Chaos is rampant across the galaxy now dealing in mutation, sorcery and summoning foul demons from the Warp. Pure Chaos.

There you have it! Feel free to write us your own choices in the comments section, or if you agree or disagree with our picks! 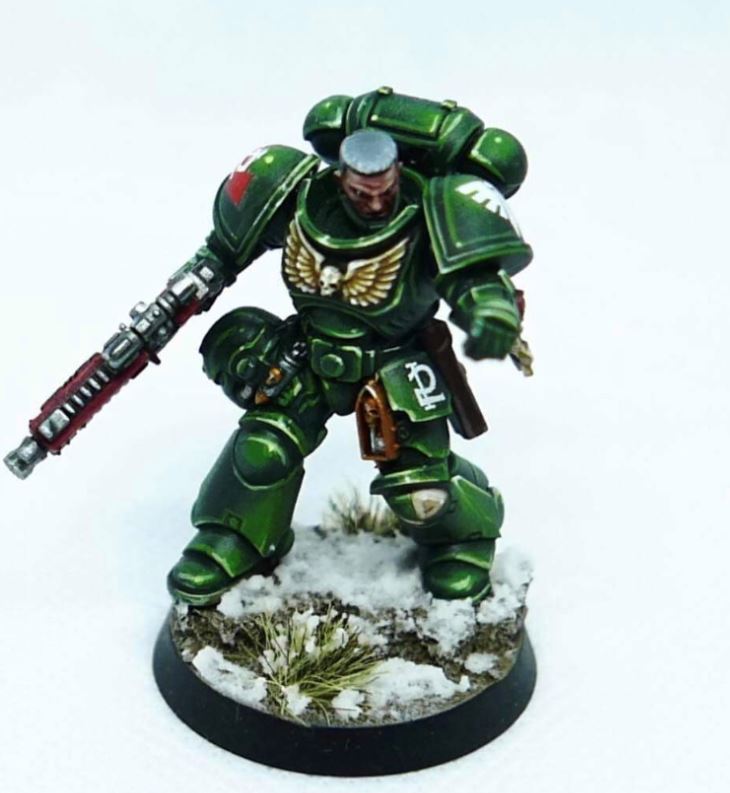