I would be willing to bet that there is not a single watch enthusiast out there who hasn’t wandered through the bountiful fields of Seiko fandom in some way, shape or form. So ubiquitous Seiko has become in the realm of affordable, entry-level mechanical watches that it would be a foolish oversight not to. It’s a place full of hundreds upon hundreds of widely varied options, most of which hold their resale value reasonably well enough that there is absolutely no better place to experiment and buy and sell and hone one’s own personal tastes and interests. That was surely the case for me, as a Seiko was my second-ever mechanical watch, and soon became my third and fourth and probably fifth if I went back through my paperwork. Besides a few brief dalliances with dress watches, a couple Seiko 5s, and a few of their more arcane oddities (crooked motorcycle watch, anyone?) I have remained firmly in the Seiko dive watch camp. From SKXs big and small to Turtles and Tunas, I’ve tried them all.  The preferences that I refined early on in Seikoland have remained and permeated the rest of my illustrious watch collecting career.

With that in mind, you can imagine how excited I was at Seiko’s announcement earlier this year of three new vintage-inspired pieces, celebrating 55 years of Seiko dive watches. Upon first glance at the photo, one of them looks like another re-issue of the legendarySeiko 62MAS. Could this be a more affordable version of 2017’s beautiful but quite pricey SLA017? Sadly, no. Reading the announcement reveals that this is the SLA037, another 62MAS tribute with updated specs and just as perfect looking, but with an even more prohibitive price of about $7500USD at press release time. I scroll towards the bottom of the page, ready to commiserate with the plethora of commenters who I’m sure are equally crestfallen over the price, when… WAIT! What’s this? A beacon, sent by the Seiko gods to blow some much needed wind into my becalmed proverbial sails.

Halfway down the page, almost as an afterthought, is the announcement of the SPB149. Billed as the “1965 Diver’s Modern Re-interpretation”, we’re off to a good start! A quick perusal of the specs reveal that this is pretty much exactly what I was hoping for at the top of the page. Sure, it’s not a 1:1 recreation of the 62MAS, but all the important design cues are there, along with an uncommon-for-a-modern-Seiko sizing of 40.5mm and 13mm thick. Sounds custom made for my diminutive wrist. The reasonable price of €1,350 for the limited edition doesn’t hurt either. After a good solid three minutes of deliberation I put in a call to my local Seiko boutique and add my name to the list for this piece, with an expected “summertime” release. A later press release reveals there will actually be a quartet of these divers, in four different colorways, but my name is already down for the LE…what could possibly go wrong?

Fast forward to mid-summer and an early-morning call from my Seiko boutique. Between salutations, the gentleman informs me that the NYC Seiko boutique is converting to a Grand Seiko boutique and will no longer carry regular Seiko timepieces, effective immediately. He apologetically gives me a few ideas of other places to try, but I already know it will be fruitless; it’s been too long since these have been announced, they will all be spoken for. A few phone calls and e-mails later and I am proven correct. Chagrined at my bad luck, I resign myself to either getting one of the other, non-limited versions, or waiting and probably paying a premium on the secondary market. 47 seconds of thoughtful deliberation later, I decide to not wait and even jump the queue a little bit by ordering straight from Japan, where these hit the market earlier than they have in the U.S. Through the sorcery that is DHL Global Logistics, I have in my hands three days later a shiny, new SPB143 (SBDC101 for the JDM purists). 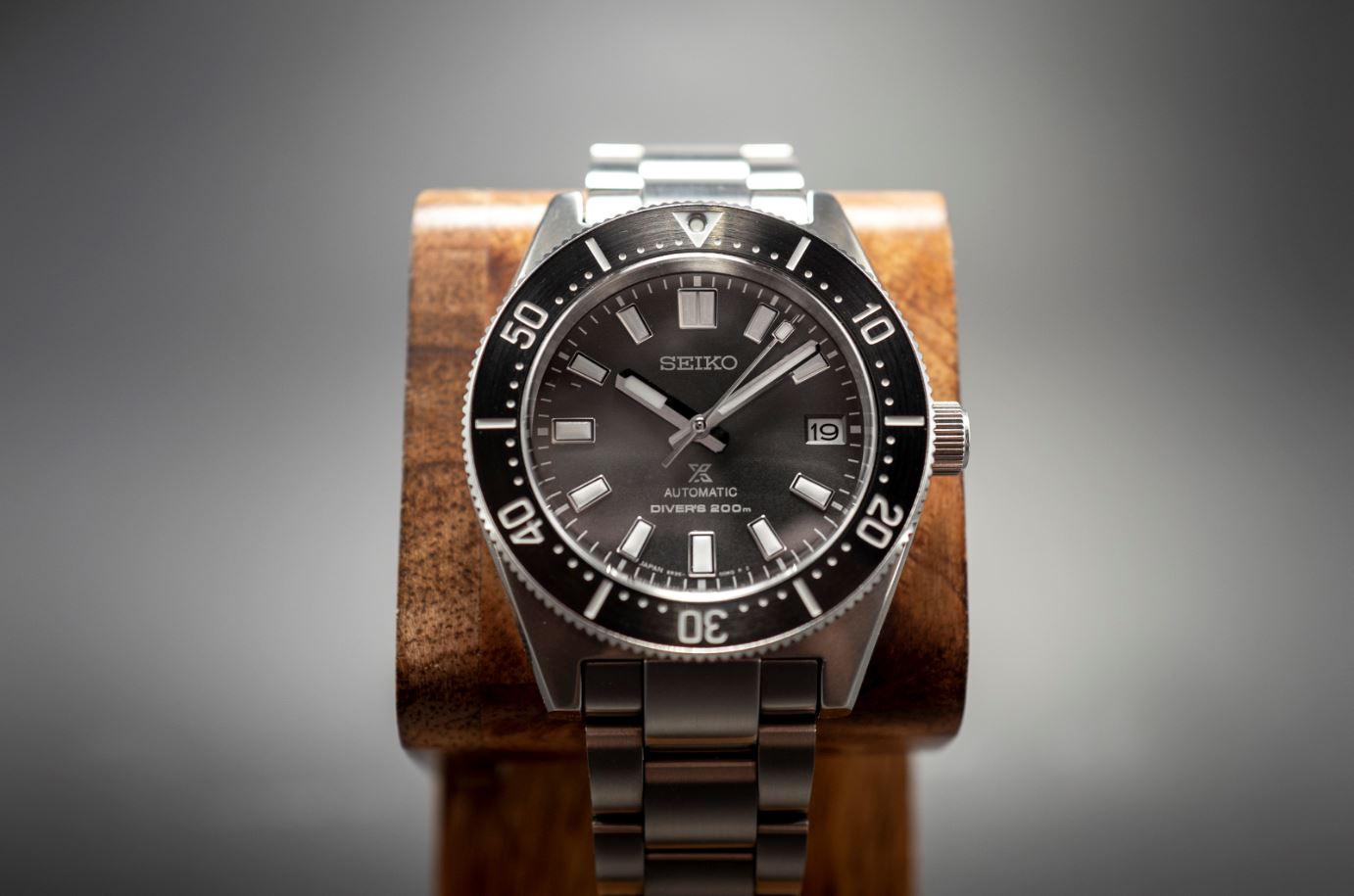 Firstly, I’d like to address the fact that this version was technically my second choice: I think I was wrong. I can blame it on being brainwashed by those 2 little letters “LE”, but I don’t know how I didn’t realize that this slate grey-dialed variation is much closer to the look of the original 62MAS that I have coveted all along. The blue with the orange accents of the SPB149 are certainly lovely, but I think the 143 has the most classic overall look. 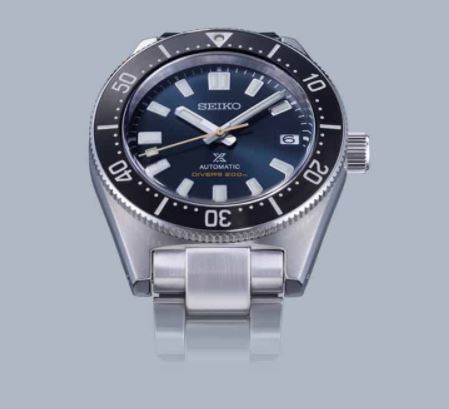 On the wrist, this thing is an absolute pleasure. It has all the charm and ease of wear of a modern Seiko diver, with the size and vintage appeal of their entries to the category 55 years ago. I, like many others, had some question about whether this would be worth roughly double the price of other modern Seiko divers. After a few weeks I can say the answer is a resounding yes. I present for your consideration the fact that most Seiko dive watches are probably underpriced for what you’re getting. The fact that you can get an SRP777 “Turtle”, part of their higher-end Prospex line on Amazon right now for under $400 is borderline criminal. That being the case, the step up in finishing, materials and movement here justify the increased price, in my humble opinion. 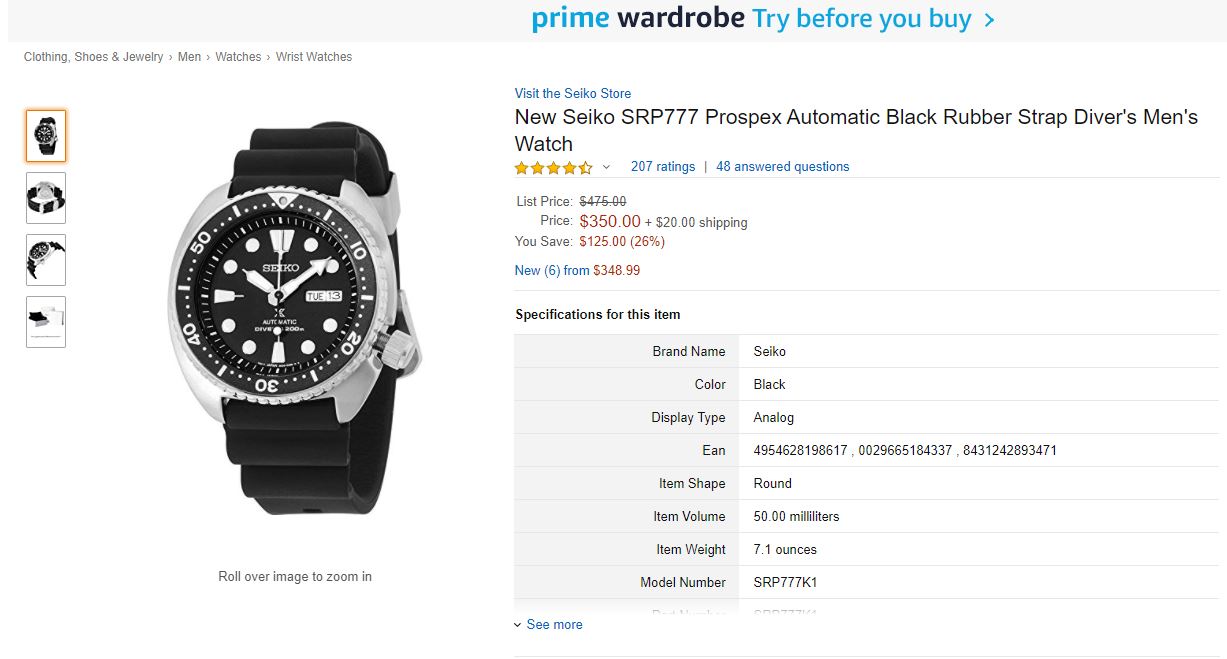 The skindiver-esqe DiaShield stainless steel case features subtly polished chamfered edges, which offer a nice play of light at certain angles, without being too shiny or fancy-looking. Drilled lugs for ease of strap changes is another very welcome feature, one I think should be a part of pretty much all tool watches. The 40.5mm diameter with a 13.2mm thickness is just about the perfect size for a dive watch, or any watch really, if you ask me. It has a nice presence and weight without being comically large and bulky like many watches these days are. The solid caseback with the Seiko wave logo is nothing special, but works great with the tool watch vibe. 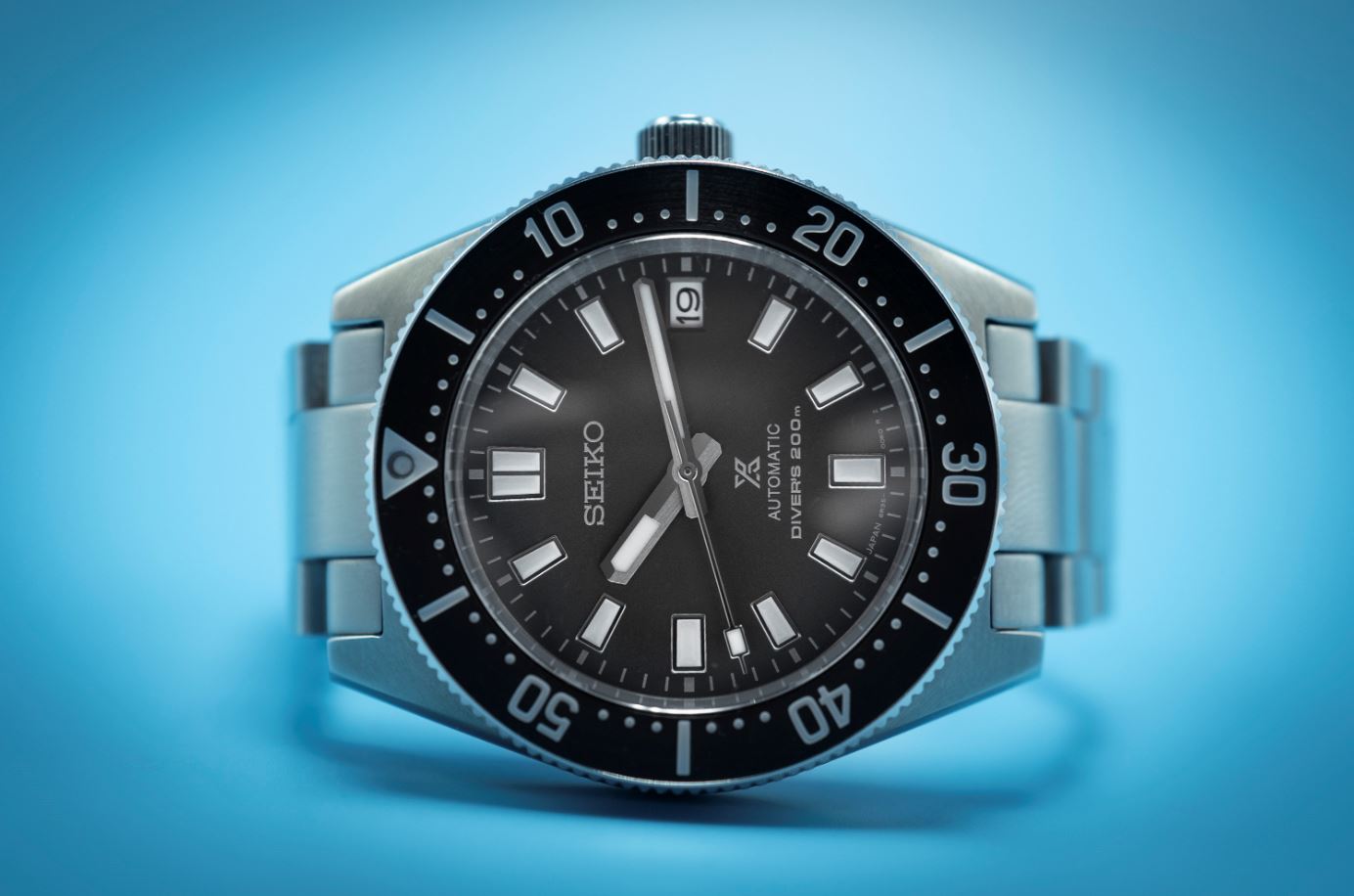 The crystal is a domed sapphire that represents an upgrade in the world of sub-luxury Seikos, where Hardlex is usually king. It offers ample protection to the slate grey dial that has a very subtle sunburst design that isn’t quite visible in a stationary position, but really comes alive with a little light and movement. It has elicited more than a few “Wow!” reactions from first-time observers. The applied indices with Seiko’s Lumibrite lume offer a high degree of legibility under all conditions I have encountered so far. The straight, baton hands complete the classic, understated look of the dial.

The bezel has been a point of contention with watch nerds on the internet. Some say it is too wide, considering that the watch is a loose interpretation of the 62MAS, an argument that I can understand, but I think the bezel works here, especially as a more modern leaning interpretation. Also, no one can quite seem to agree what the bezel is made of; I have seen it listed as both ceramic and DiaShield-hardened stainless steel, with no official word from Seiko in sight. Whatever it is on a molecular level, it has a radial, brushed finish all the way around that is very visually striking, and engraved minute markings complete the upgrade in finishing here among modern Seikos. 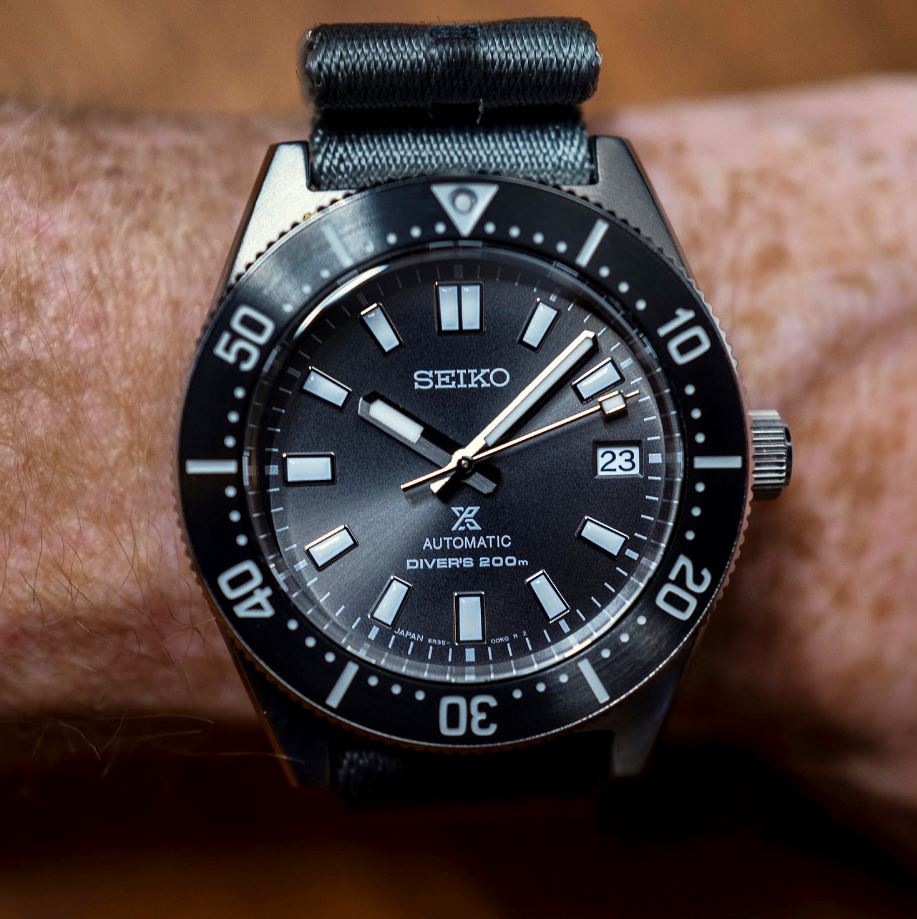 The movement under the hood also represents an upgrade from previous Seiko Prospex divers. The 6R35 is an automatic movement, and part of what Seiko calls its High Performance 6R series. It is considered an upgrade to the 6R15 movement, the biggest difference being a 20 hour increase in power reserve, from 50 up to a very respectable 70 hours. The 6R35 beats at the Seiko standard 21600bph, features hand-winding and hacking, and has a claimed accuracy of -15/+25 seconds per day in normal temperature conditions. I have only checked the accuracy on mine once, but came up with a much better result of +4.3 spd and have heard similar numbers from other early adopters. This is a new movement so I suppose time will tell.

This version comes on an oyster-style bracelet that is a definite step up from what I have grown accustomed to with Seiko. Usually when I get a Seiko on a bracelet I will have already planned an immediate strap change upon delivery. With few exceptions, I find their bracelets oddly designed, poorly matched with certain watches, and overall just cheap-feeling. This one finally breaks away from that mold. It is a hefty, nicely machined and well-finished affair with a solid fold-over clasp and a very handy diver extension. This watch will surely spend more time on tropic and nato straps, but finally having a Seiko bracelet I won’t relegate to the bottom of a drawer is a nice option. 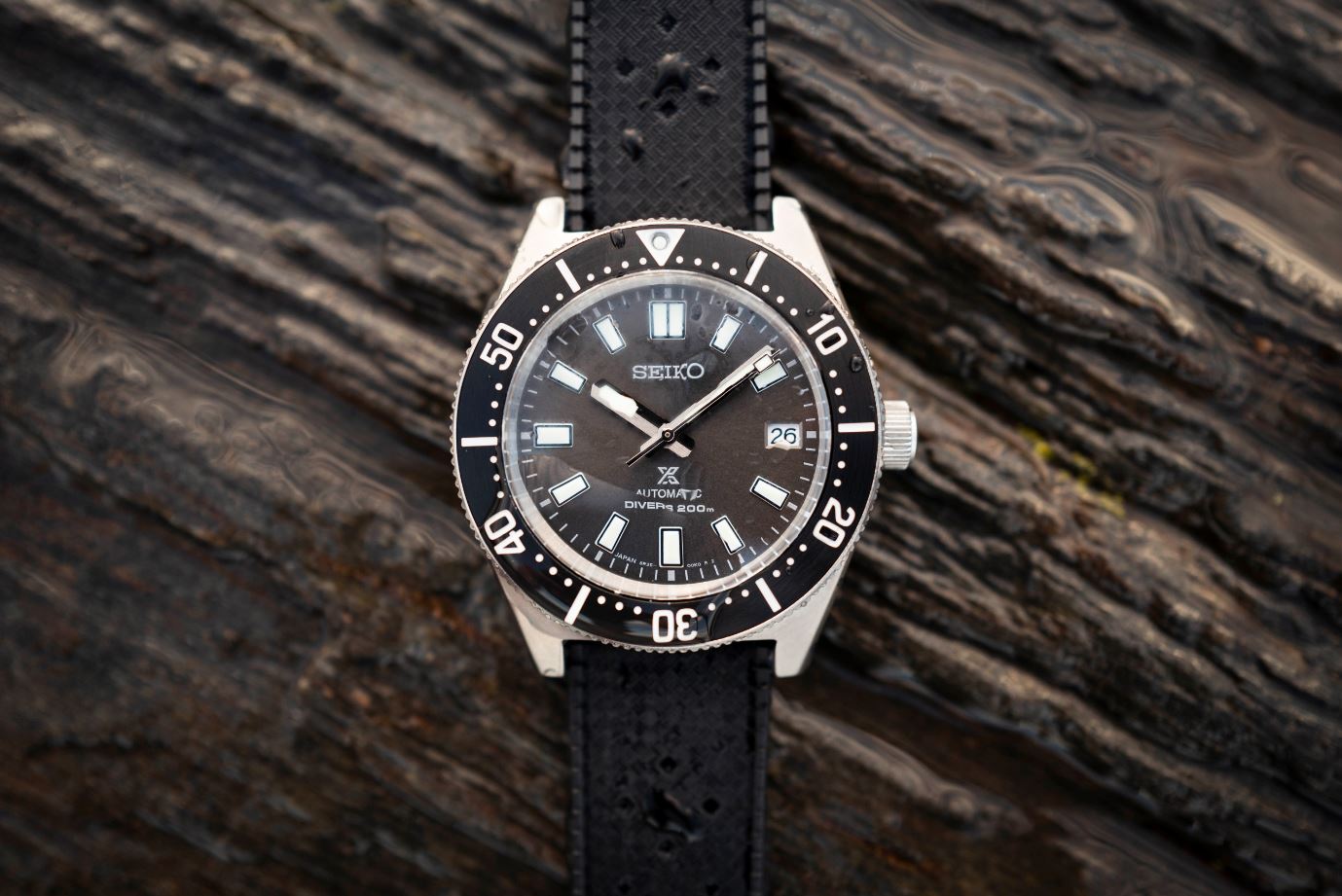 All things considered, I think this is a very important release for Seiko. One that sees them making advancements in their manufacturing and finishing at this price point, and also listening carefully to their core fanbase. For a company that sometimes seems a little deaf to enthusiasts and prone to making confusing design and pricing decisions, this is a pretty big deal. I imagine this watch will be wildly successful and that we will probably see more iterations and color options down the road, and I say bring them on. After many years of waiting, Seiko has finally made the Seiko I’ve always wanted. 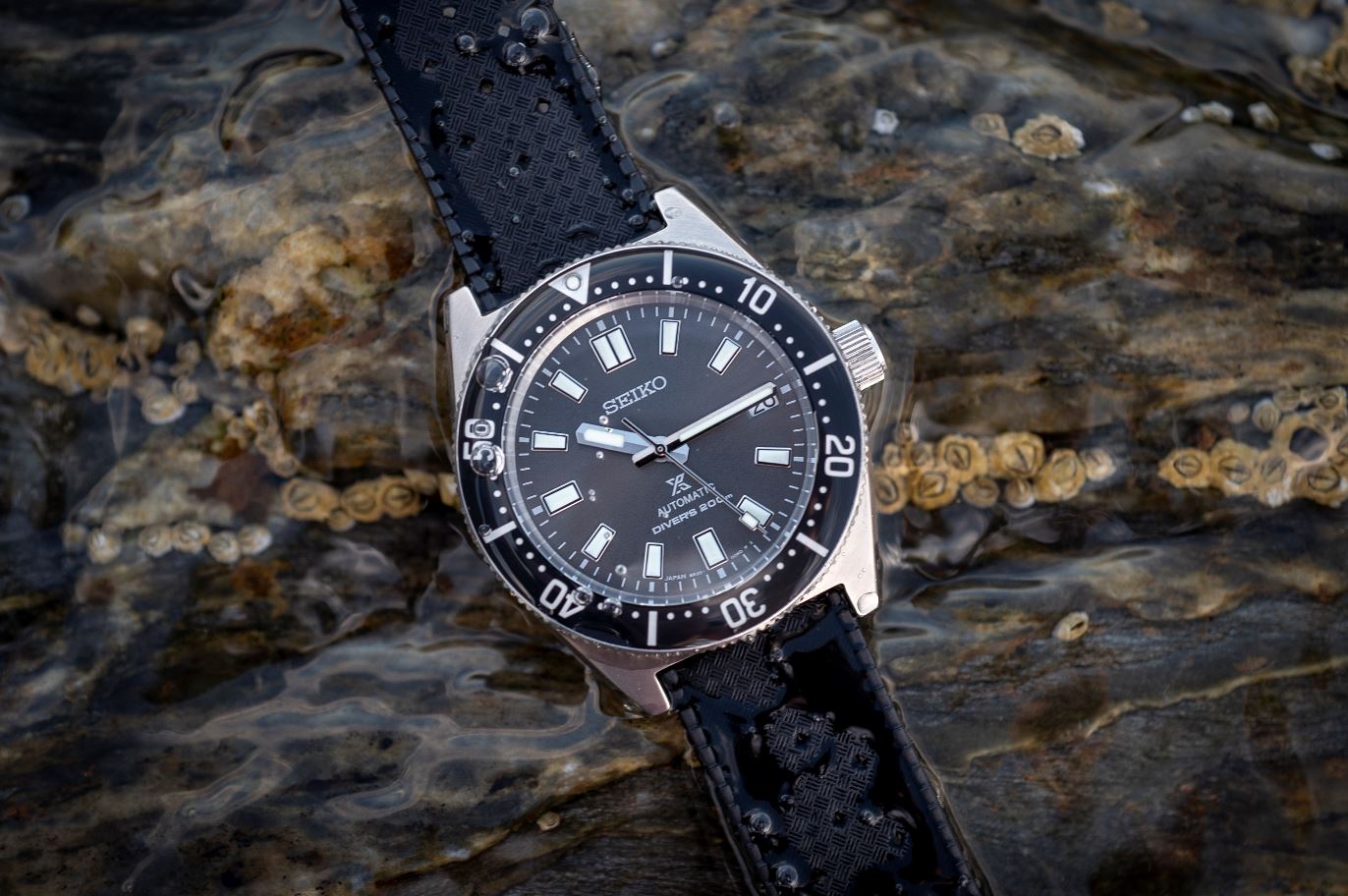