When I was a child, one of my mothers most prized possessions was a Japanese painting, which took centre stage in our lounge. I can recall the deep, vibrant colours even now. Time spent gazing at this piece would frequently reveal different tones and shades. Light sometimes reflected from it, yet on other occasions, would give the original colours a life of their own, almost creating an entirely new picture.

This was because the painting was created with enamel. A brief google will tell you that enamelling is the art of fusing glass onto metal under high heat conditions to create colourful designs. Aside from painting, enamelling is decoratively present in many forms: Pottery, furniture, glassware..and watches. 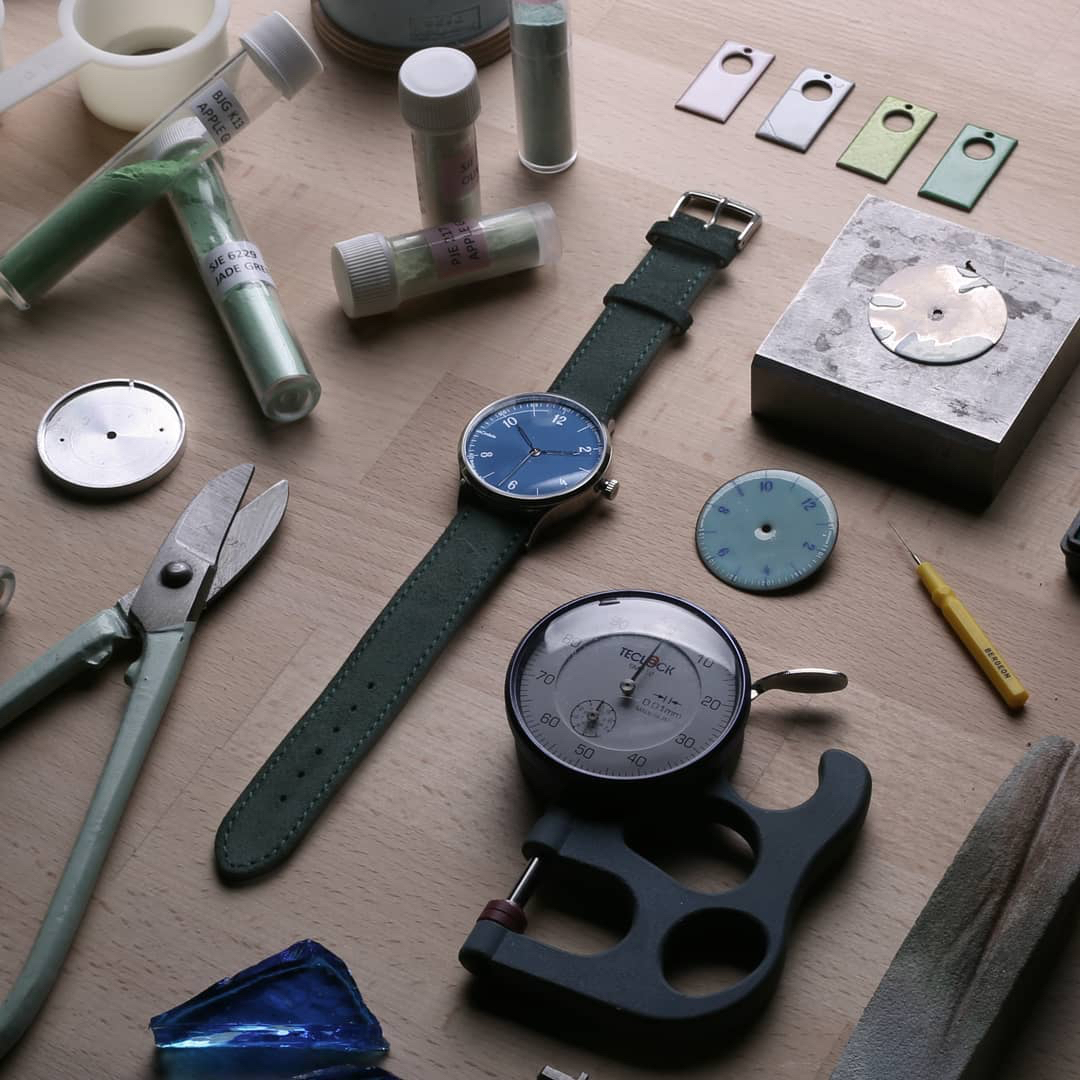 Enamel watch dials are nothing new, they have existed for many years. But given the intricate process required to produce these dial faces, they are usually featured in the higher end of the price market. Very few companies are able to produce their own enamel-faced watches and still sell them at an attractive price for the everyday consumer. Amongst others, big-budget Seiko have their Presage Enamel collection, but at a similar price-point are the watches of Glasgow-based company anOrdain. 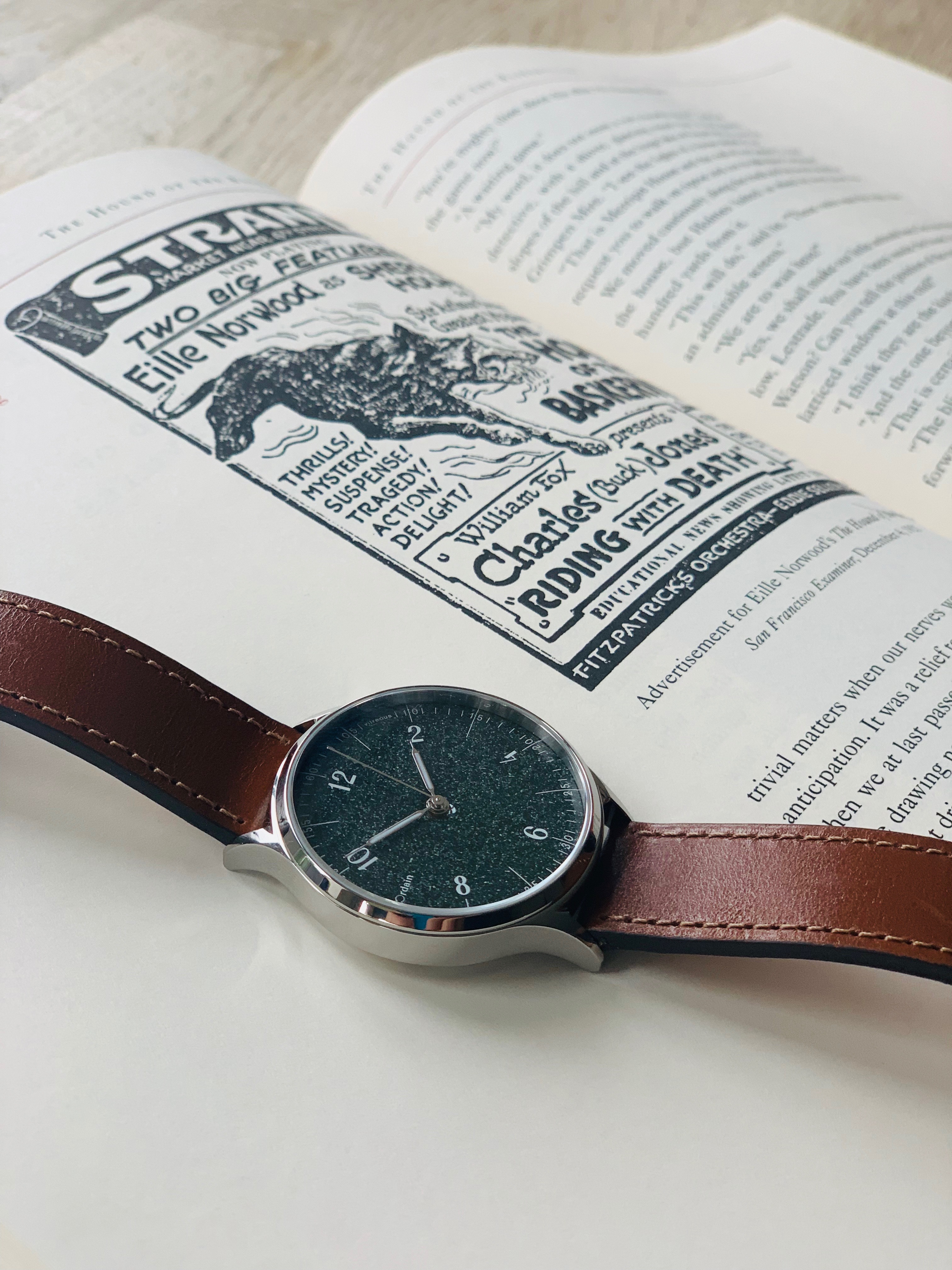 Started in 2018, they pride themselves on creating in-house, beautiful hand-made enamel dials, highly influenced by their native Scotland. (Even the company is named after a remote highland lochan, Loch anOrdain). At just six people strong when they started out, the company were only capable of producing 8 dials a week using the grand feu enamelling technique, which involves covering a copper dial with ground powder and then firing it in an oven many times. Company founder Lewis Heath explains in an interview for Gear Patrol magazine that, “due to a lack of ability, passion and understanding of enamelling elsewhere, we started doing it ourselves.” 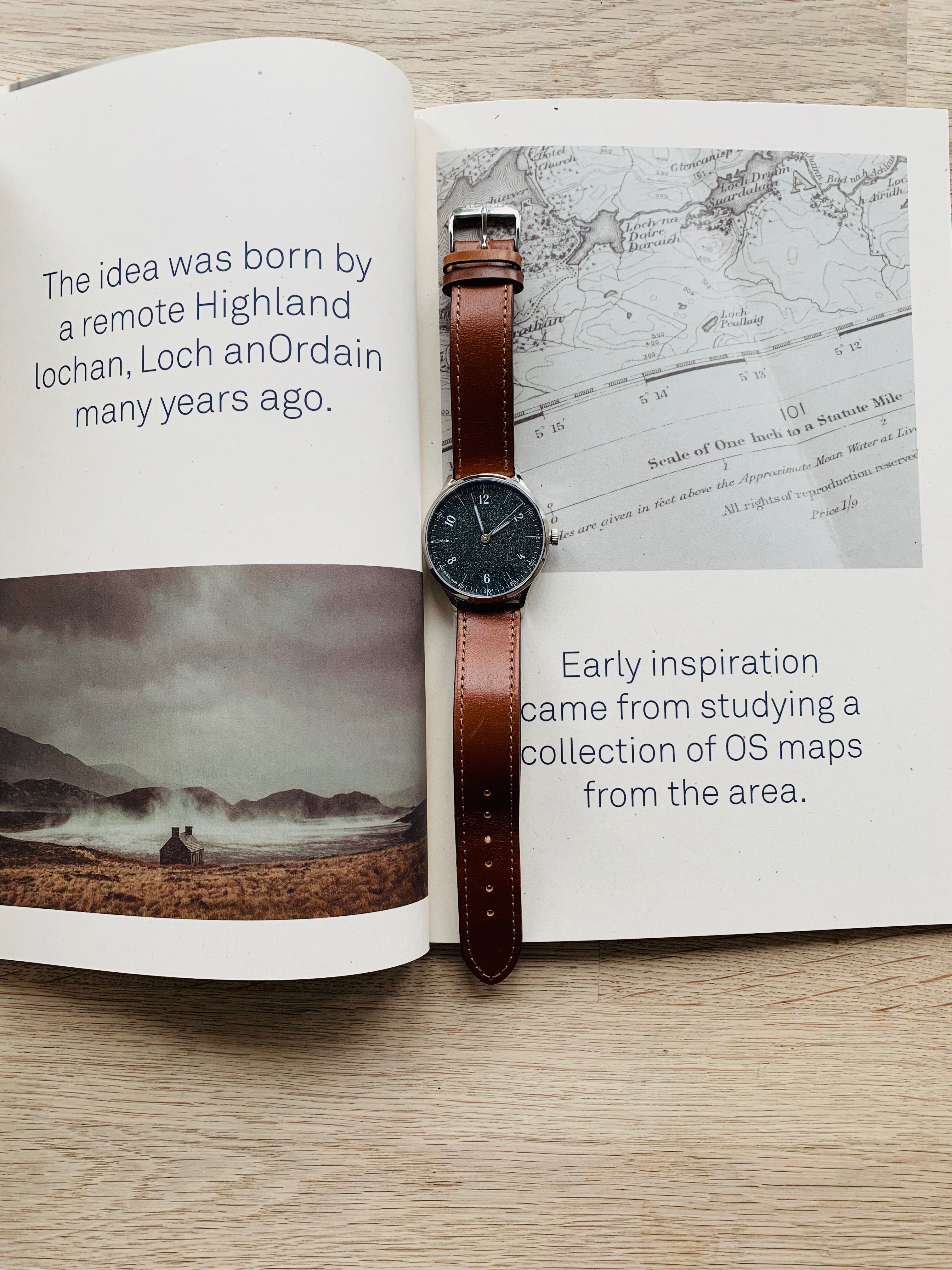 A consequence of that is the price; the raw materials aren’t too expensive, once you’ve mastered the techniques then the cost is in labour. He goes on to explain that we’re getting to the stage where we can make 14 or 15 per week with a team of three enamellers, so it is starting to become a viable business. Regarding price, if we didn’t make them in-house then we’d be paying mark-ups for a third party and that takes you out of affordable territory very quickly. 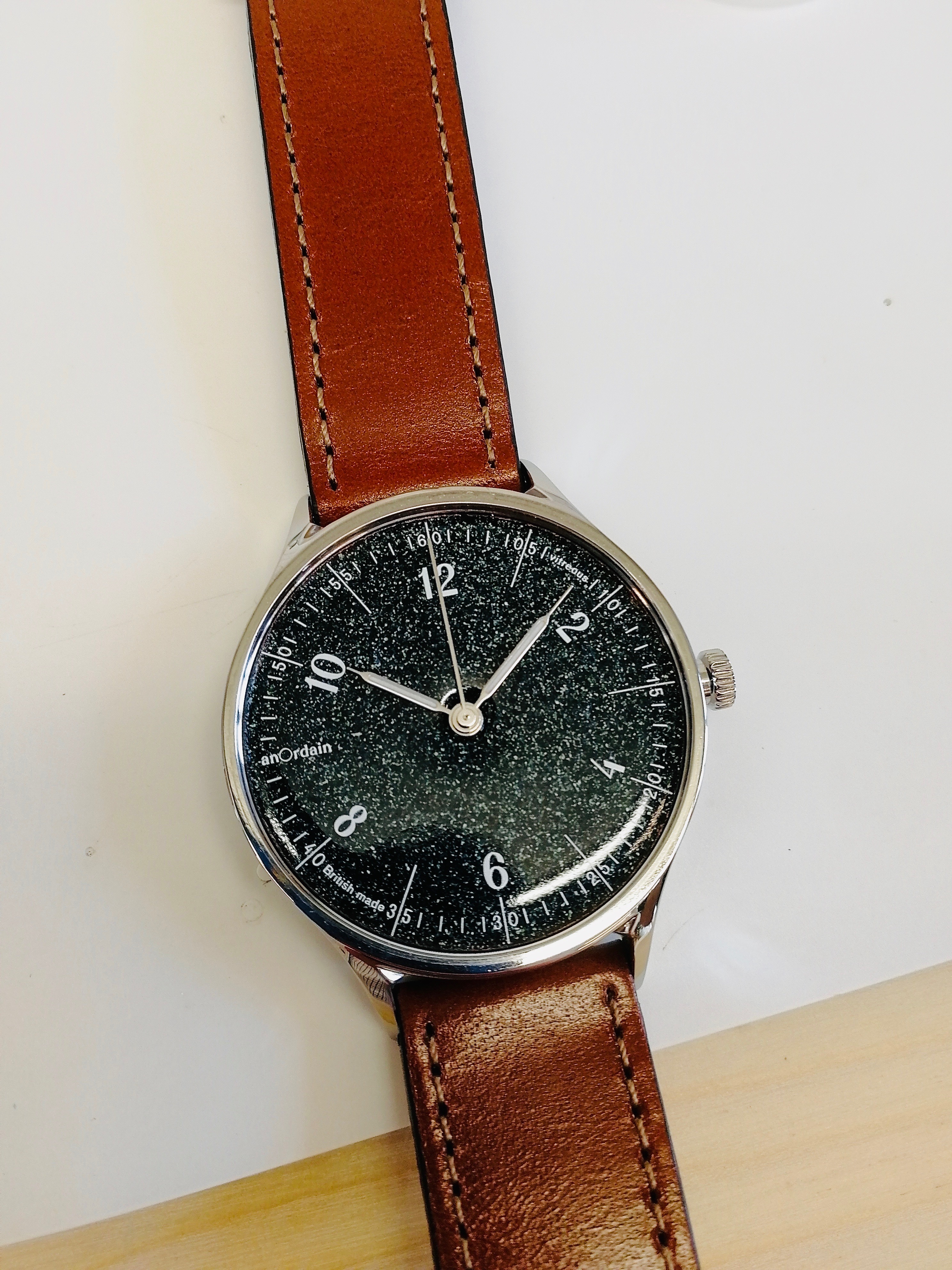 The watches themselves are gorgeous. The typeface on the dial is inspired by old Scottish Ordnance Survey maps. Even the packaging is well thought out and designed beautifully. The leather case is sourced from a tanning outfit based in Florence, the outer box is made by an old London firm, W MacCarthy & Sons. This box card is then wrapped in paper made in Scotland by Arjowiggins. In addition to this, the tissue paper print is taken from OS maps around Lock anOrdain, and the cleaning cloth is made by the English firm, Selvyt. 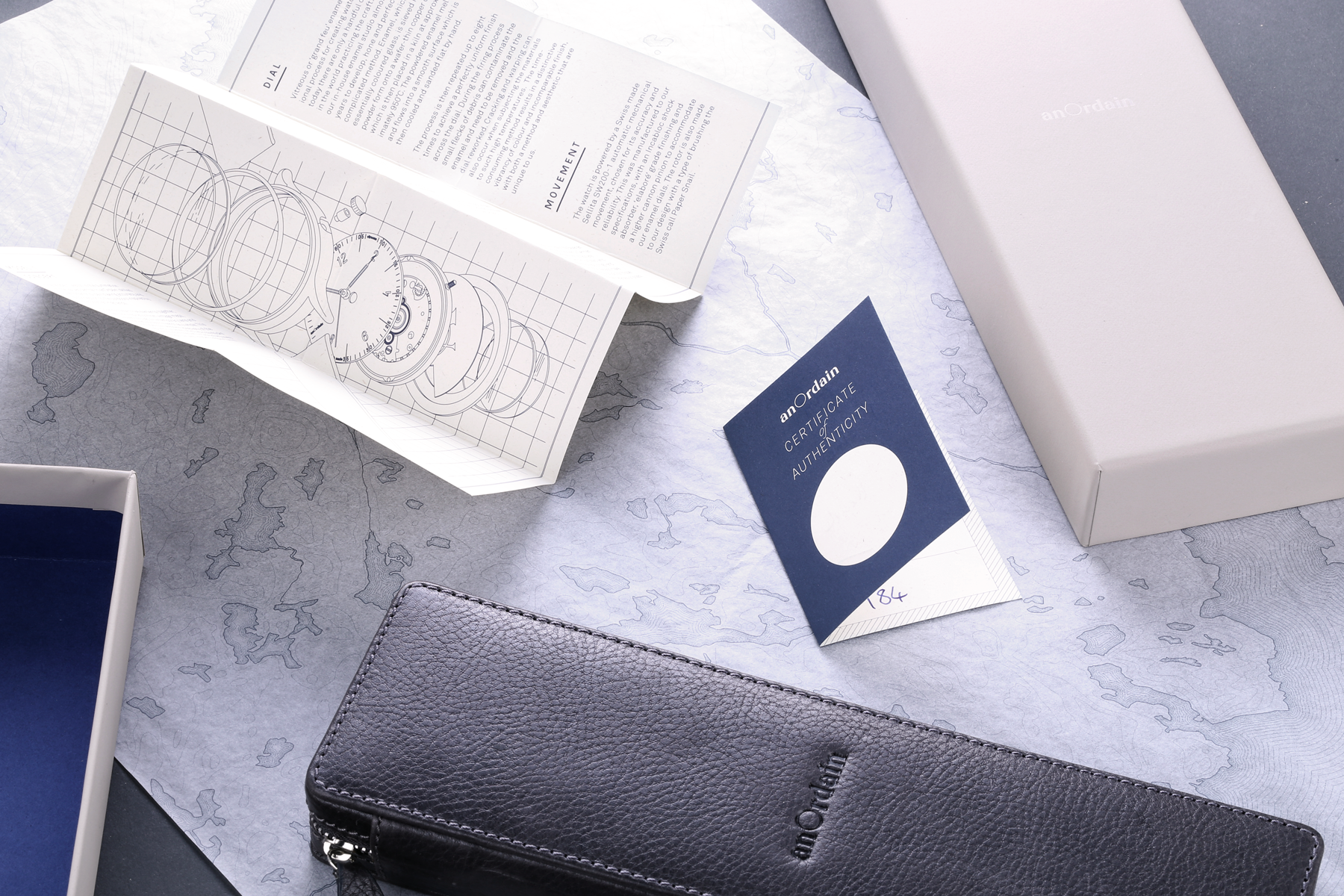 The attention to detail is second to none. I was completely in love and, after doing some research decided to take the plunge. Exactly at this time the company announced that, coming to the end of the run of the Model 1, there would be a super-limited edition of 8 dials made up of all the remaining, different colour glass powders, a run-out addition which quickly developed the hashtag #sludge. I was lucky enough to get one and, after excellent personal contact with the company, my watch arrived a few weeks later.

It was beautifully boxed and accompanied by a personal hand-written letter of thanks for my custom. I even have an invite to drop into the workshop if I’m ever in Glasgow.. you definitely don’t get an invite into the super-secret corridors of the Geneva headquarters of Rolex with your first purchase! 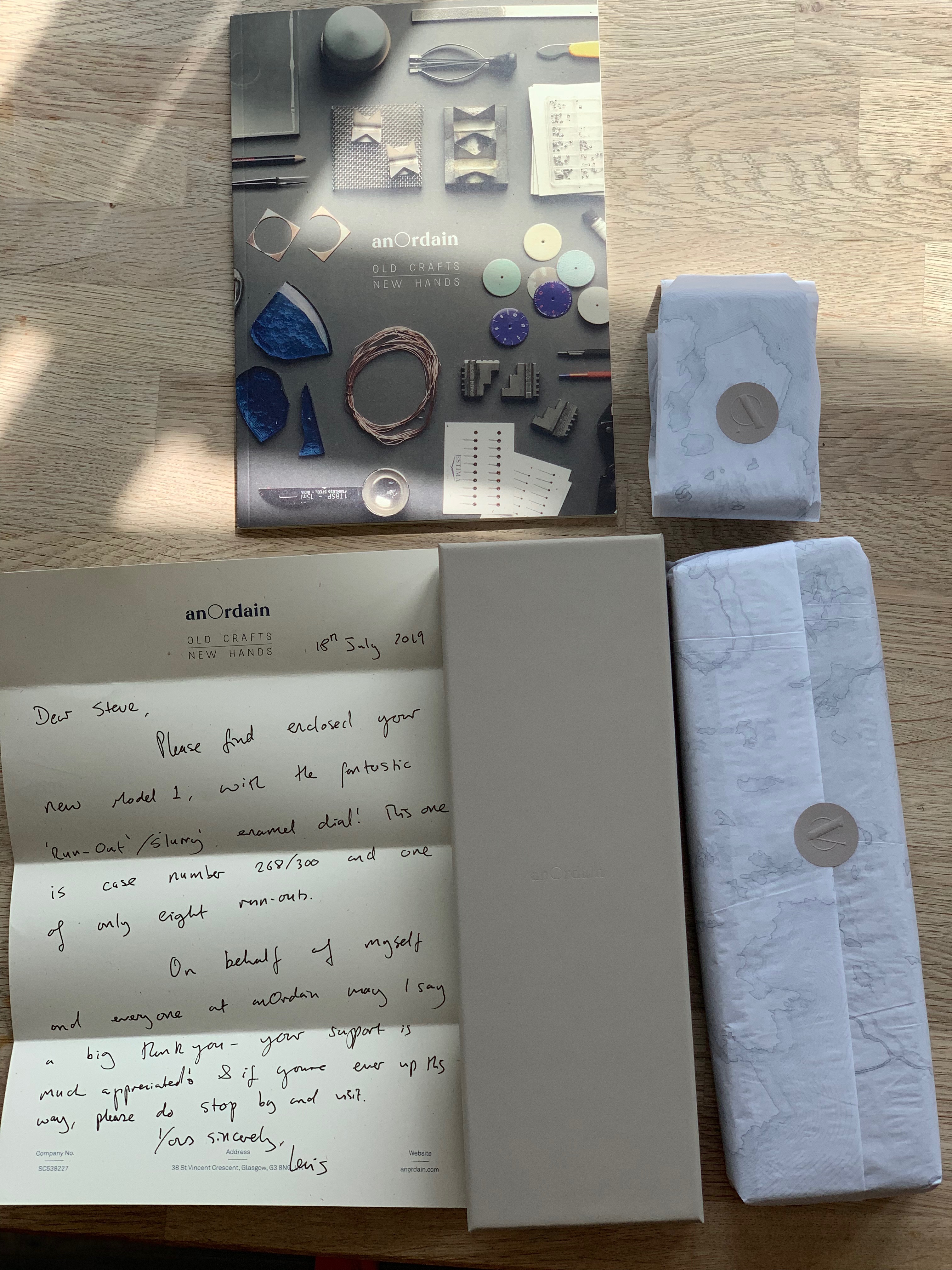 The watch is powered by the automatic winding Sellita SW200-1 movement, a no-nonsense reliable calibre, with a 4 Hz escapement, a 38hour power reserve, an Incablock shock system and 26 jewels. Visible from the display back, the rotor is nicely marked, but other than that, it is all just a standard, no-frills movement.

The first thing you notice when you look at the face of this run-out edition is the texture of all the different colours. You can see tiny marks in the enamel which make each piece truly unique. Every glimpse exposes another hidden depth, a different shading will appear at certain angles. Like getting to know a lover, the watch face reveals facets of itself in time. 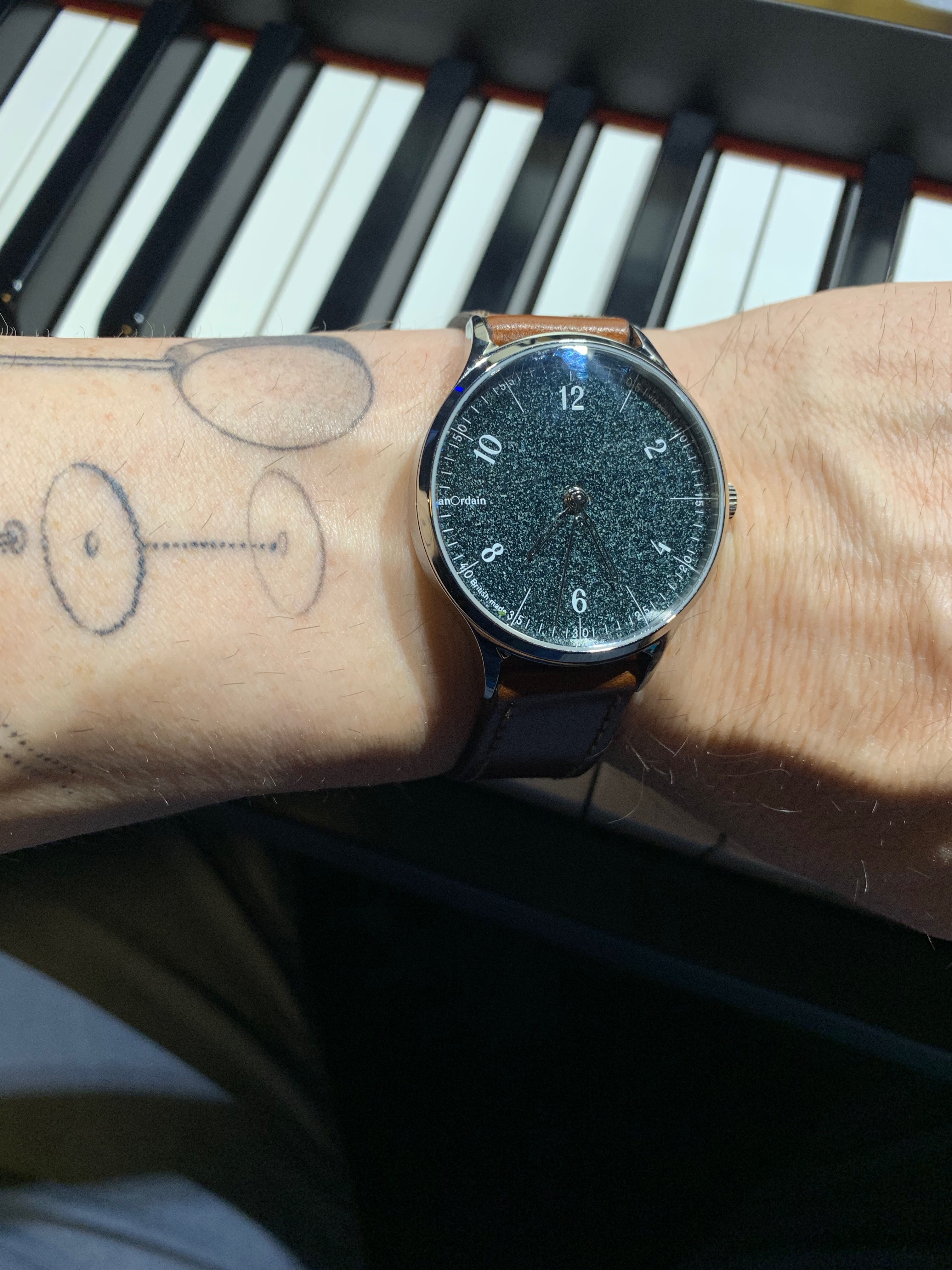 The next thing that became very clear was that I couldn’t tell the time.. No, I hadn’t suddenly lost the ability to read a watch, but I had noticed that the hands did not show up against the dark face very well. I’m a musician and I work regularly in the West End Theatre world. Musicians are often in the pit, which is a very dark environment. I need to be able to glance at my wrist to be able to know what time it is. And now all that glance revealed was #sludge. After persevering for as long as I dared, I finally, with a heavy heart, contacted anOrdain to request a refund, explaining my situation.

The lovely and incredibly helpful Lewis was prepared to do this, but he suggested he first try filling the voids in the hands with Lume, as this would make them more visible. I settled for white Lume (having been given a varied choice) and sent the watch back, eagerly awaiting it’s return. 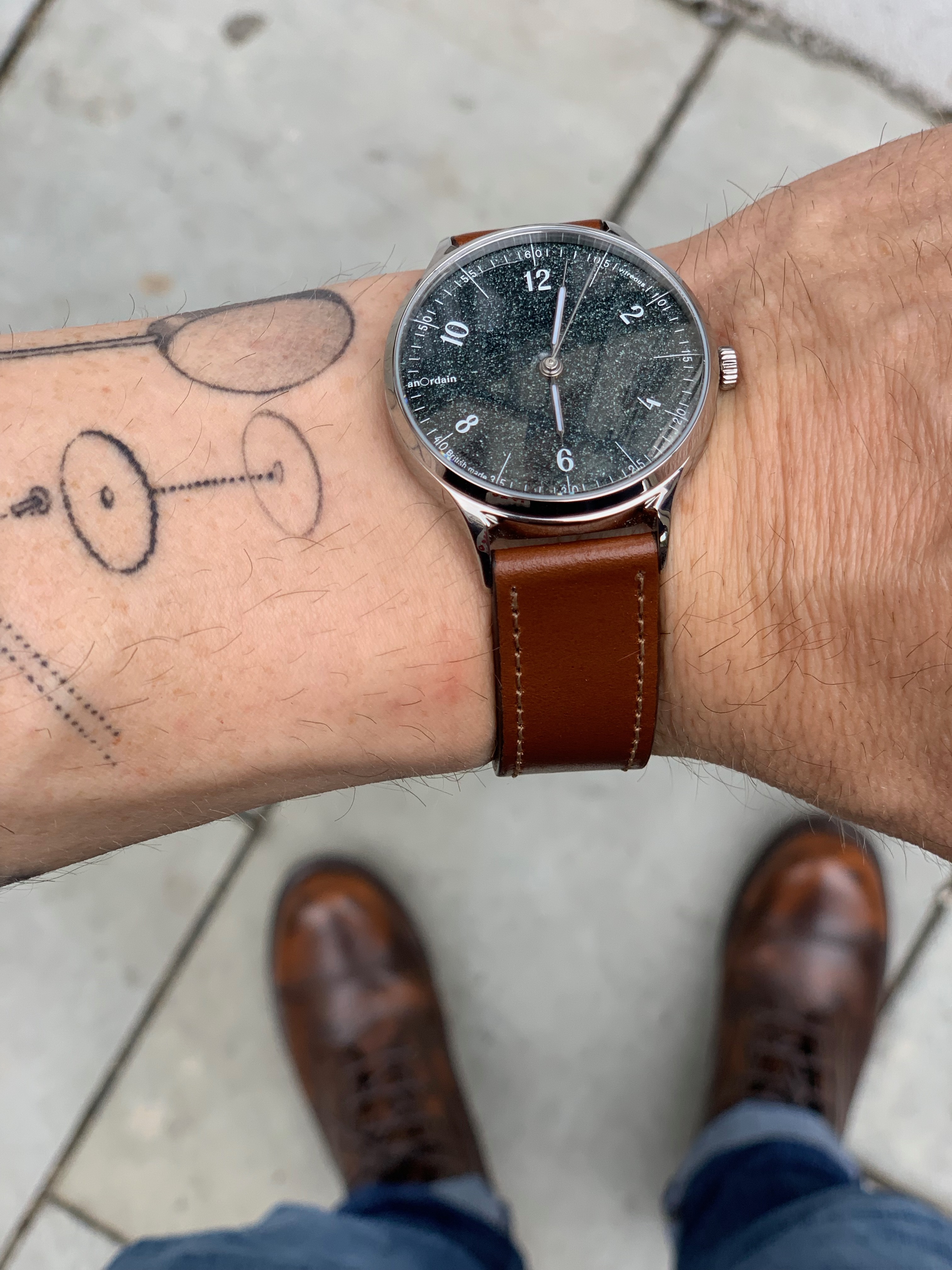 The result was staggering. Lewis even admitted that he should have lumed all 8 pieces of this edition, as the visual improvement was immense. I now have a one-of-a kind edition from a watch company that is going from strength to strength. Yes, they may have displayed some naivety and lack of planning where the hands were concerned, but frankly, the candid conversations I had with Lewis regarding this only made me respect the company more.

Everything about anOrdain appears sincere and driven by heartfelt values. They seem to be genuinely doing this because they love it, and they love sharing their art for others to enjoy. In July 2019 they released their smaller 36mm Model 2 field watch to critical acclaim and have recently re-released the Model 1. Although still a 38mm watch, it is now a smaller 11mm in depth as opposed to the 12.3mm we see here. No longer featuring a display case-back, the new Model 1 now has a solid back, and anOrdain now offers an engraving service to add that personal touch. The first retail partnerships have appeared, and reviewers seem to love everything they are doing. 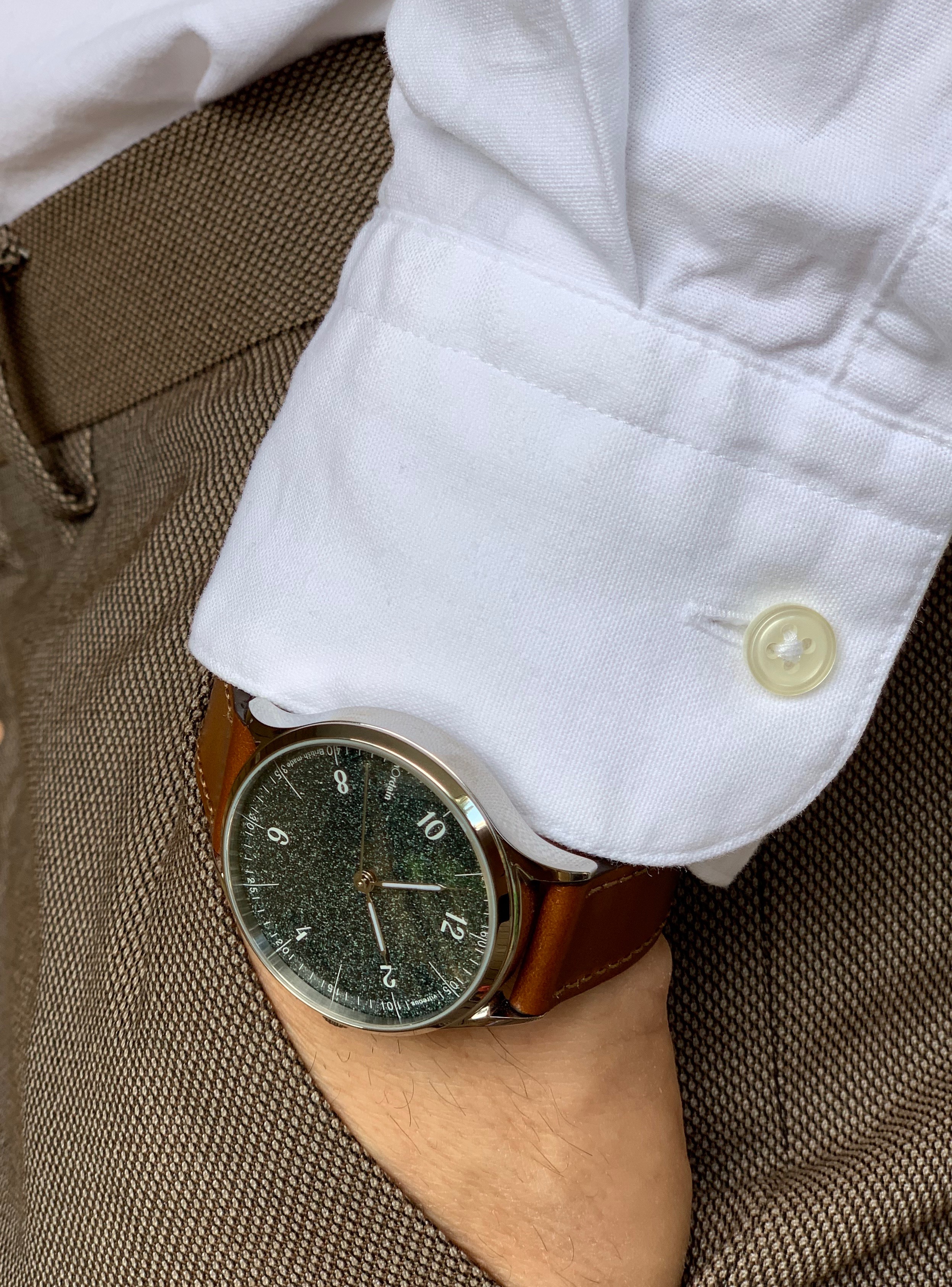 As a value proposition, my watch is already worth more than I paid for it, and having a one-off rare piece is always going to be attractive to a collector. But for me, it’s about owning such a personal, beautiful, unique watch. I take great comfort in knowing the genuine passion and attention to detail that has gone into every stage of making this piece. It gets comments and raises interest whenever and wherever I wear it, and I look forward to enjoying it for many years to come. 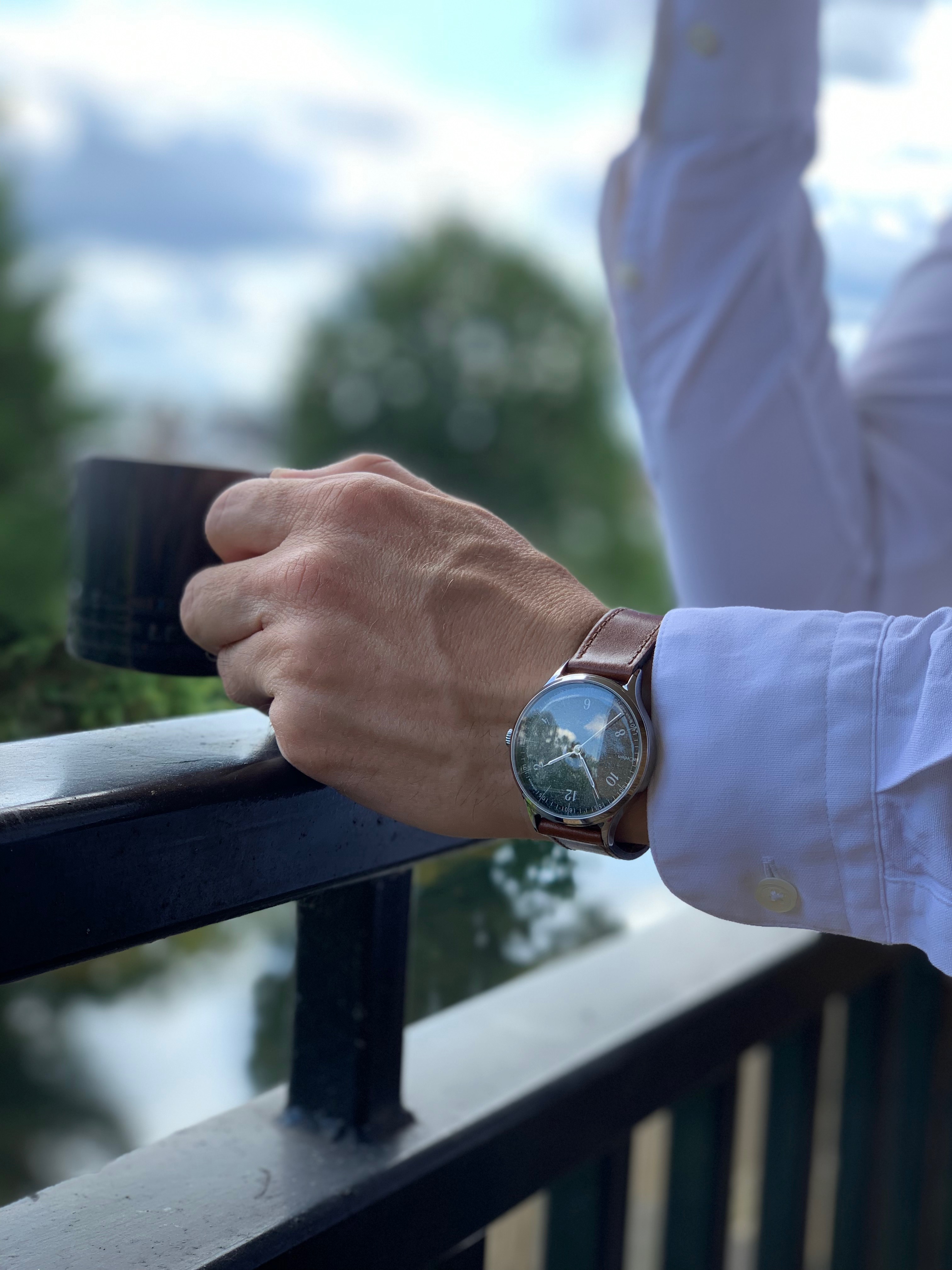