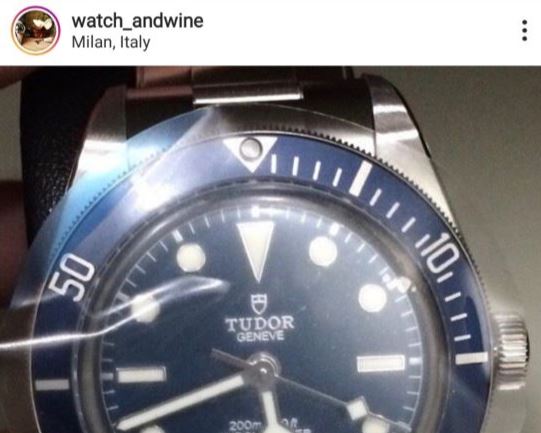 ‘Allo ‘Allo! A new week has passed and a lot has happened, I did my best to pick the more interesting nuggets.  So, without further ado let’s get cracking!

Incredible news everyone! There were no Seiko releases last week!

News from Tudor? Well, yes and no. The rumour is that something is coming in July. Tudor started trolling on their Instagram feed a few days ago teasing the blue Pelagos, the blue BB 36 and the blue bezel BB Heritage. 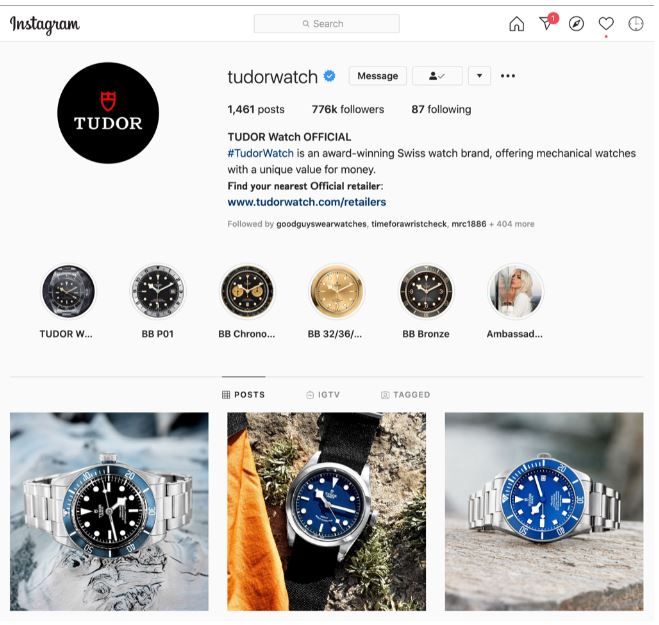 So it’s a done deal it’s going to be blue. Photoshopped pictures of a blue bezel and blue dialed  Black Bay 58S have been doing the rounds on the interweb for some time now so, nothing new. Even Jenni Elle teased a blue BB58 saturday in a video, citing the new reference number that she sourced on a yet to be published July price list. 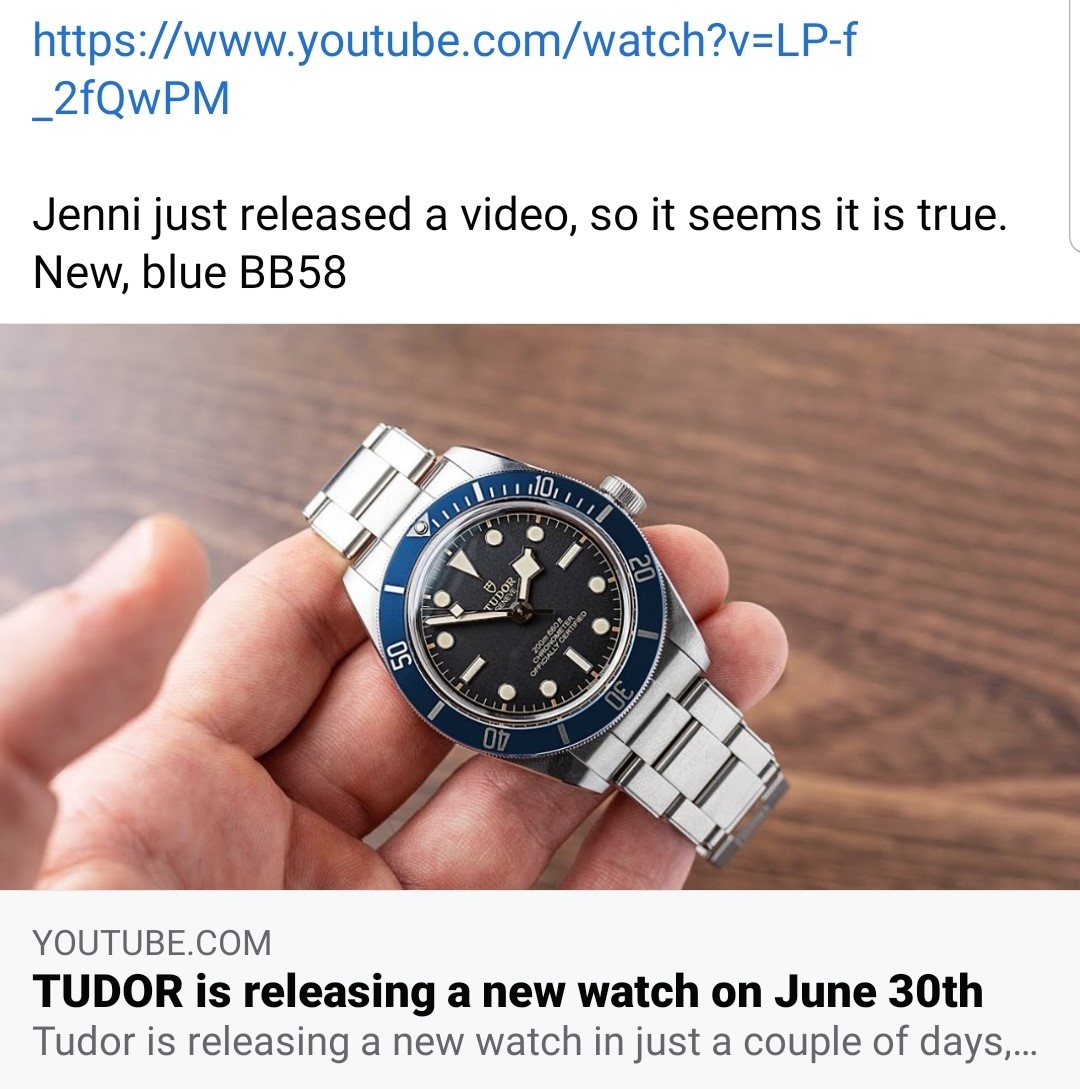 That video has since been taken down (naughty Jenni!). Lastly the photo below dropped on Insta Sunday evening, and it looks legit. So, come the new month is this going to be it? I hope so and thank goodness,  this is the worst kept secret in the watch world, let’s just get it out and over with so we can get on with our lives! This announcement is going to be less surprising than the latest round of Apple Keynotes. 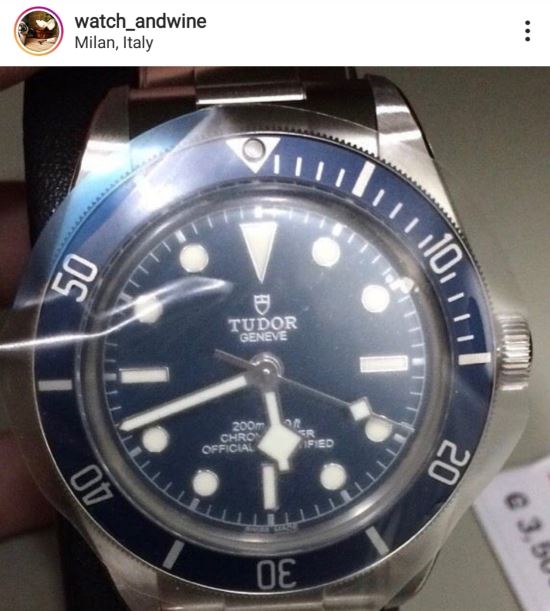 Is this the BB58 TURF (Tudor Smurf)

This weekend Phillips held the XI Geneva watch auction, a massive event with 214 lots. Prices on some pieces were out of this world: limited edition FP Journes were bid at over a million swiss francs a piece. Of interest is that many of the pieces in the auction were part of Jean Claude Biver’s private collection. JCB’s personal Patek reference 1518 reached the astronomical record breaking price of 3.4 million swiss francs! But that wasn’t the thing that surprised me the most. A  “mundane” watch like the Rolex GMT Master II “Batgirl” changed hands at 25k francs! I mean hasn’t the buyer heard of Watchfinder and Chrono24? We at SW towers have always suspected some fishy goings on behind these auctions: how else can you explain such a ludicrous valuation? But the real star of the show was the auctioneer Aurel Bacs. His on-stage antics were a hoot; a real showman. 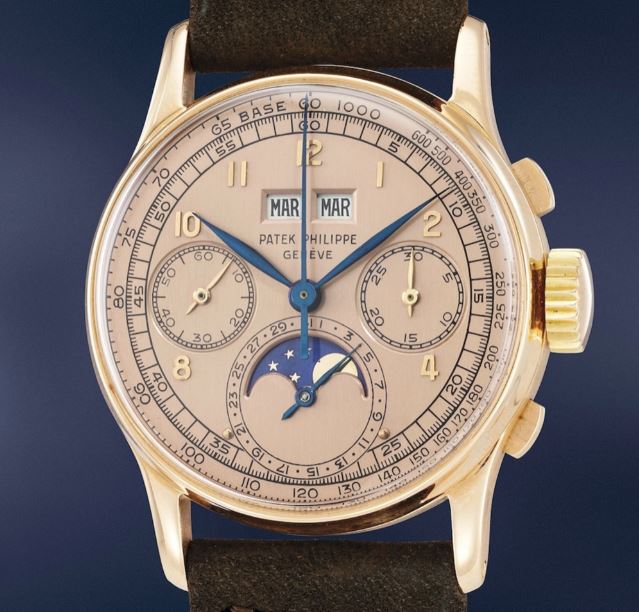 “Dressed up like a million-dollar trooper, Trying hard to look like Gary Cooper, Super Duper”. Get your tux out of mothballs because Longines has launched a couple of 1940’s style re-edition retro pieces. The name: “Tuxedo Heritage” and they look stunning. The line is comprised of a 38.5mm three-hander with black and cream dial, large lumed arabics with small seconds and a 40mm chrono with the same colour scheme and two subdials. Both are in steel with black leather straps and Longines “in house” (read ETA) movements. The other good news is the price: they will set you back just 2000$ and 3000$ respectively, a steal in my opinion. Longines has really “put on the Ritz” with this release! 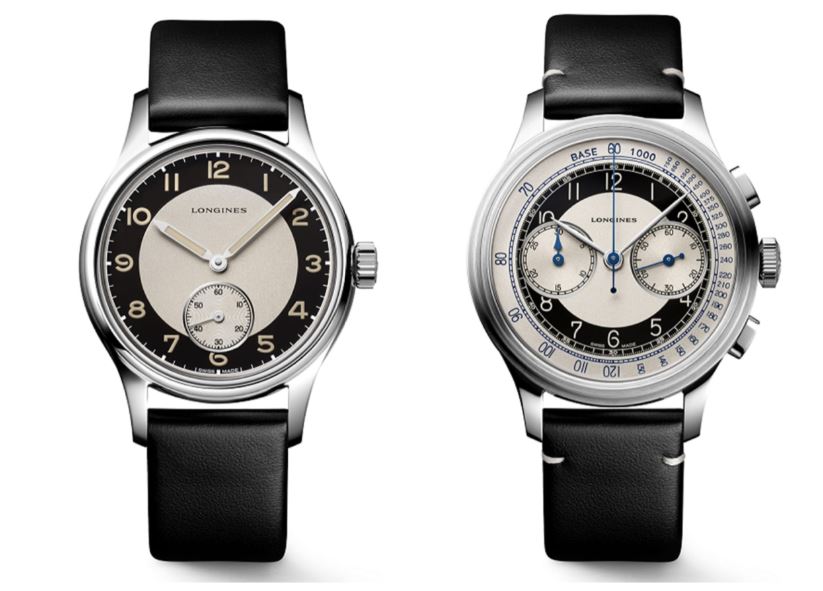 The Schaffhausen based watchmaker is gifting our eyes us with a bronze cased, green dialed version of their Big Date Pilot watch: The Spitfire Edition “Mission Accomplished”. This watch celebrates the successful completion of the world tour of a Silver Supermarine Spitfire fighter piloted by the two founders of the Boultbee Flight Academy. The tour covered 43.000 km visiting over 20 countries. The style of the watch is that of a large classic 46mm “Flieger” with oversized sword hands, small seconds and large date, nothing particularly noteworthy. What works for this watch in my opinion is the colour scheme: that magnificent olive drab dial combined with the bronze case and riveted brown leather strap make for an impressive look. The case back has a fine commemorative engraving and shows the gargantuan 8 day power reserve through a little porthole. What I don’t like so much is the white square around the date window: why ever did IWC do this? 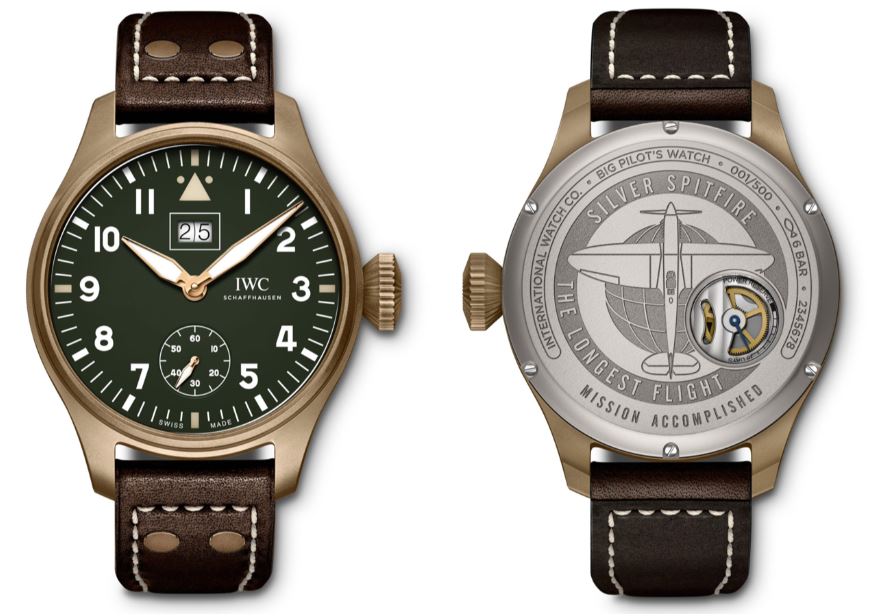 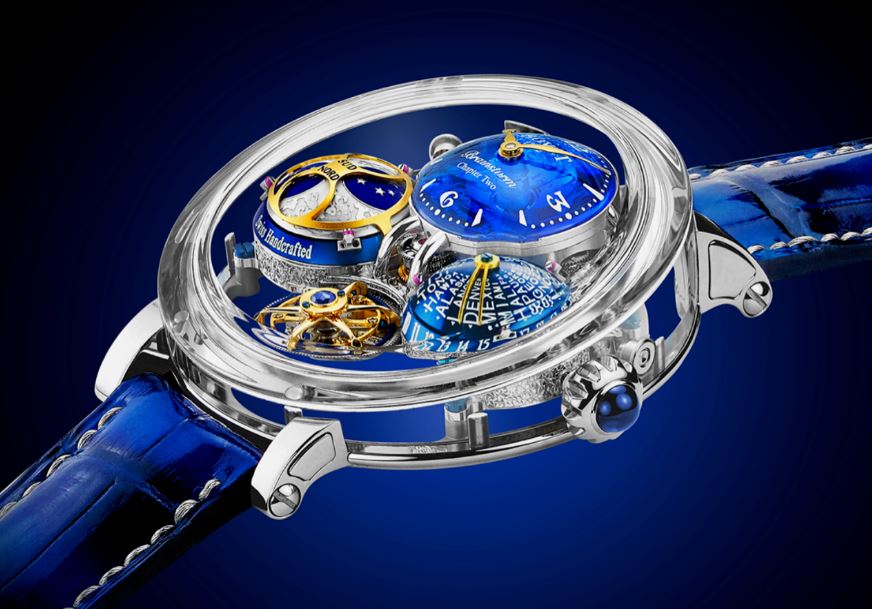 Last but not least, from the master watchmaker Bovet, we have the Recital 26 Brainstorm Chapter 2. This work of art is enough to blow the mind of even the most hard core watch enthusiast. Cased in sapphire the 3D dial contains domed complications: main time, a lunar phase, world timer, and power reserve indicator that can be seen through the sapphire between the lugs at 6. A flying tourbillion completes the picture. I can’t even imagine the amount of fine workmanship that is required to create this marvel. The cherry on the cake is that the moon phase is so precise it only needs correction once every 127 years! I hope they make an equally stunning co-ordinated winder! 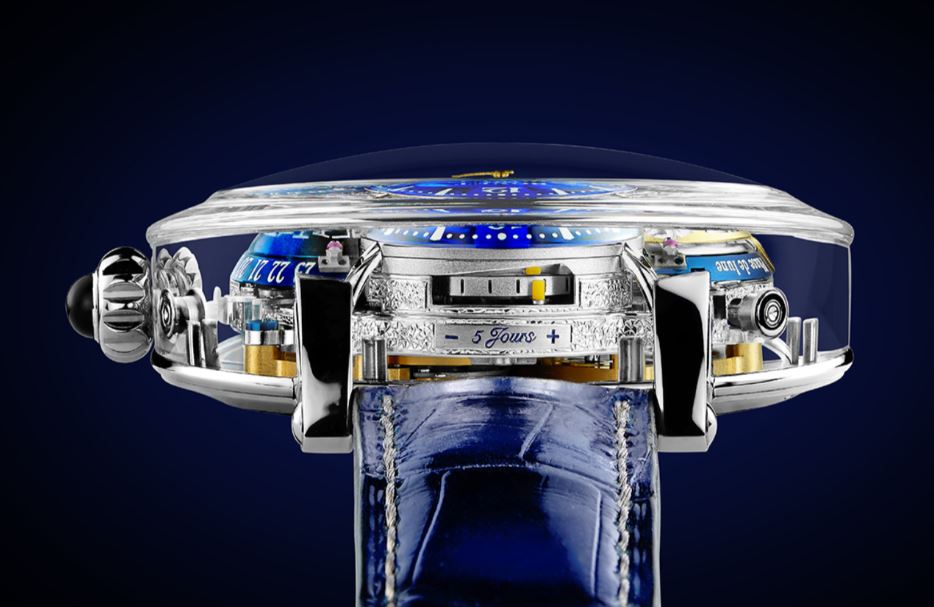 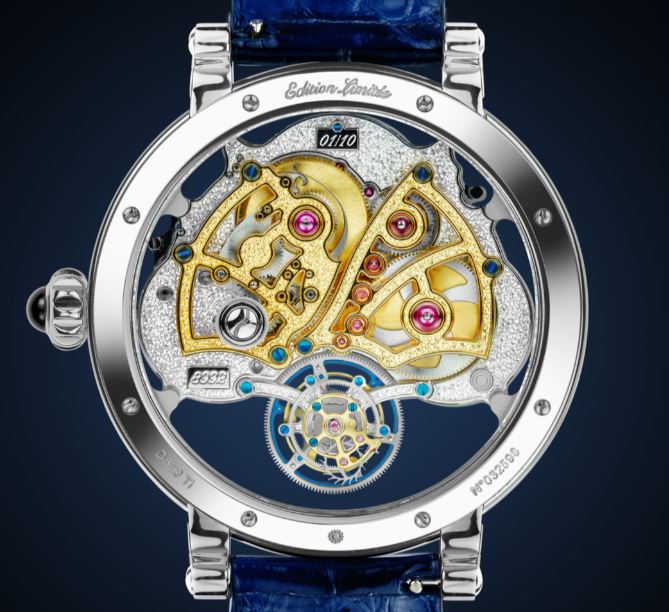