I’ve seen AVI-8 around on social media for a while now. Photos of their watches regularly pop up in my newsfeed. Saying that, they’re not one I’d seen in the metal before. When they offered to send me their latest model (at that time) to take a look at, I was more than happy to take a closer look! 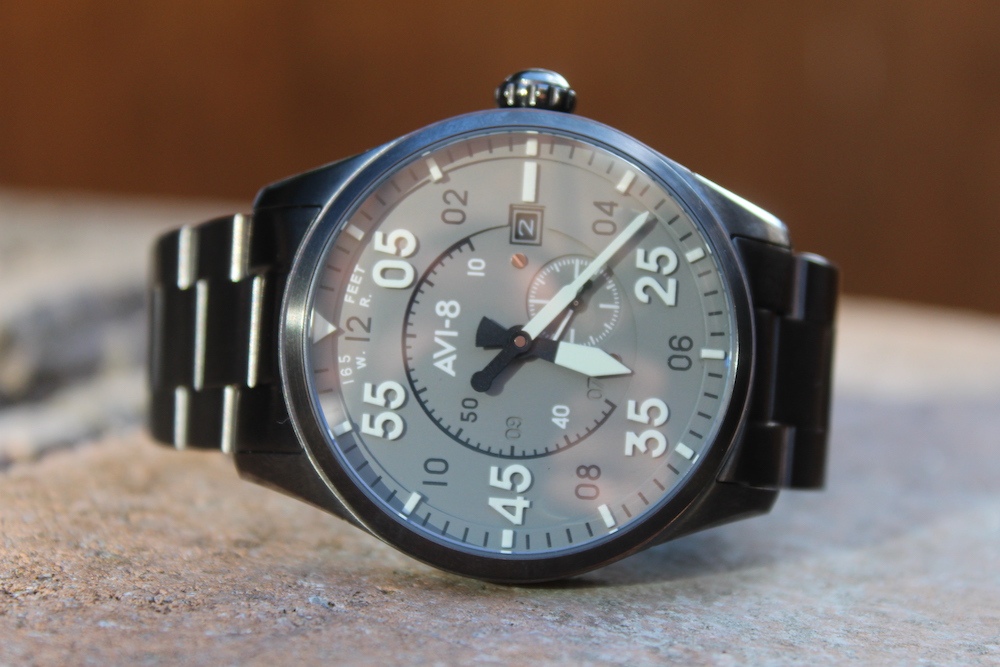 So here we have the AVI-8 Spitfire 300. The watch’s namesake was a British single-seat fighter aircraft that was used by the Royal Air Force and other Allied countries before, during, and after World War II. It’s widely recognised as one of the most important aircraft ever built and remains a popular icon with history and military enthusiasts around the world. AVI-8 is not the first brand to pay homage to the Spitfire, IWC has famously produced a line of pilot watches under the Spitfire name for some time now. The IWC iterations, however, are more in reference by name only. AVI-8 delves a little deeper into the aircraft’s own design language and replicates elements through its design. Let’s dig a little deeper. 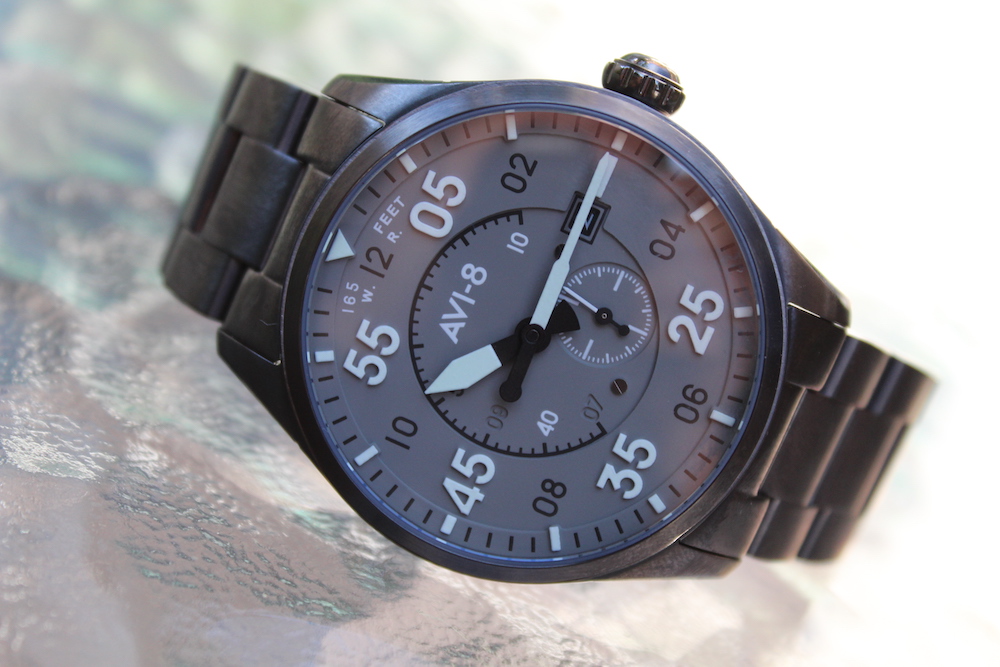 At first glance this is very obviously a pilot’s watch, not just by name. It’s clean, it’s legible, there’s lots of lume and it’s not overly fussy in the greater sense of things. That said, it also does a great job at standing out from the crowd and doing the whole pilot watch thing in its own way. There’s a multitude of brands that attempt to recreate dashboard/cockpit instruments in their designs and many fail miserably as they succumb to the fine line between tasteful and gimmicky. Bell and Ross are probably the de facto leaders in this area (not the failing and gimmicky bit though!). In this example though AVI-8 have done a great job at producing a very wearable watch that actually looks pretty cool. 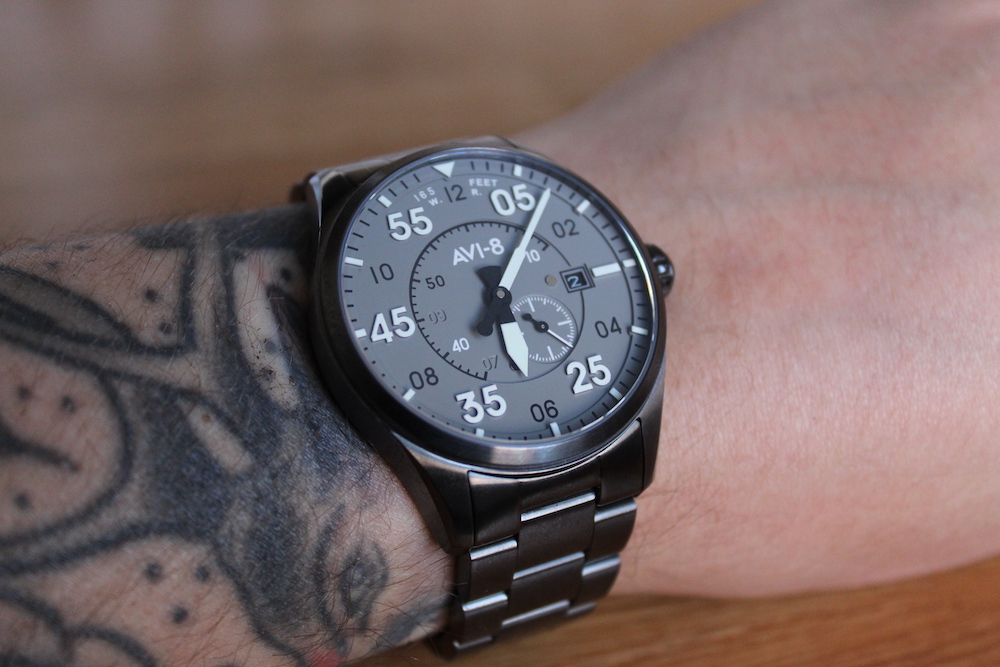 Starting with the dial, the resemblance to a cockpit dial/gauge is obvious. As one would expect given the Spitfire name, AVI-8 have been heavily inspired by the ‘knots gauges’ of original spitfires. This is true of the general aesthetic, but also down to some of the finer details too. Debossed numerals on part of the inner dial, and applied faux screws by the seconds subdial. Both of these details also featured on the Spitfire ‘knots gauge’. Pretty cool huh? For fans of vintage military aircraft, this is a nice touch. AVI-8 always get very specific with their dials and love to offer a little something more for those who take the time to look a little closer at their wares. 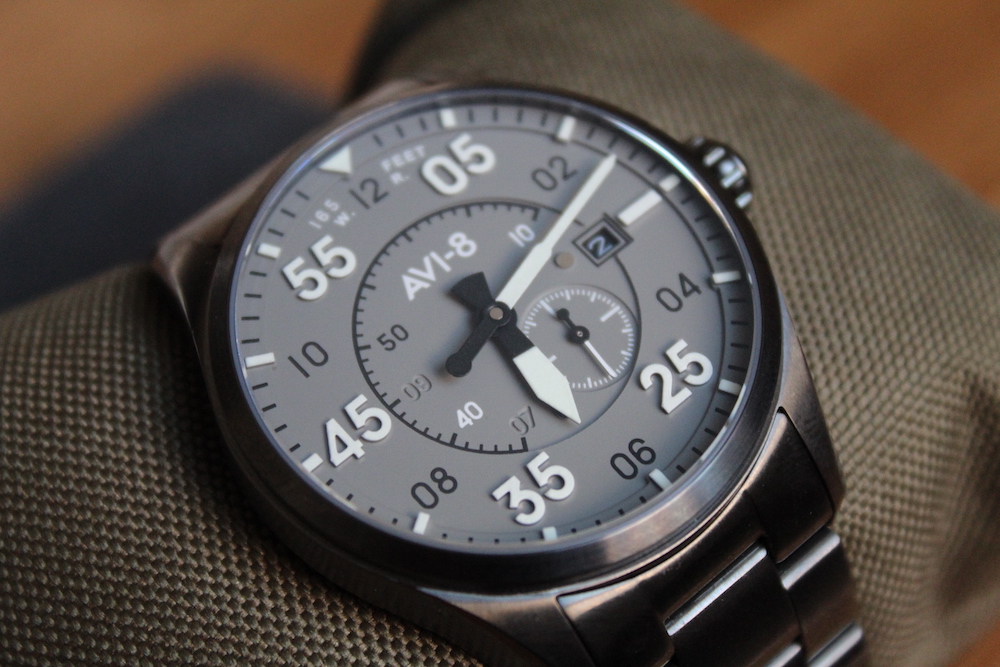 We have two scales on the dial, but instead of using one for hours and one for minutes, they are weirdly combined…but it works. Working around the dial we see the hours and minutes alternate between the scales. Around the outer edge we have a standard minute track with applied and lumed hour markers standing nice and tall. On the outside of the main dial the minutes are shown at 1/5/7/9/11 (3 is omitted to allow for the date window cutout). The numerals are applied and sit really nice and tall. They’re also generously lumed too. At 12/2/4/6/8/10 the hour markers are crisply printed in black text. Moving on to the inner dial, we see the order alternated. The inner dial is only partial as part of it is lost to the seconds subdial at 4.40, but I don’t mind it. It works and only goes to enhance the instrument vibe. The seconds subdial is also slightly recessed.

I’d like to highlight here that AVI-8 have done a great job at creating depth on this dial. There are four distinct levels, not taking the applied markers into account. This keeps the eye busy and it’s nice to see this level of detail and attention on a watch in this price bracket.

Rounding off the dial is a black bordered date window at 3 o’clock. The datewheel is black which is also nice to see. It’d have been all too easy to go with the standard white datewheel which would have broken up the design. It’s only a small detail, but it’s these smaller details that make or break a watch sometimes, so kudos to that.

Moving on to the case it’s a pretty standard round case shape. It sits a very wearable 42mm across, but wears a little bigger than the equivalent dive watch due to the bezel-less styling. Regular pilot watch wearers will be used to this, but for someone like me who usually wears dive watches it’s worth noting. 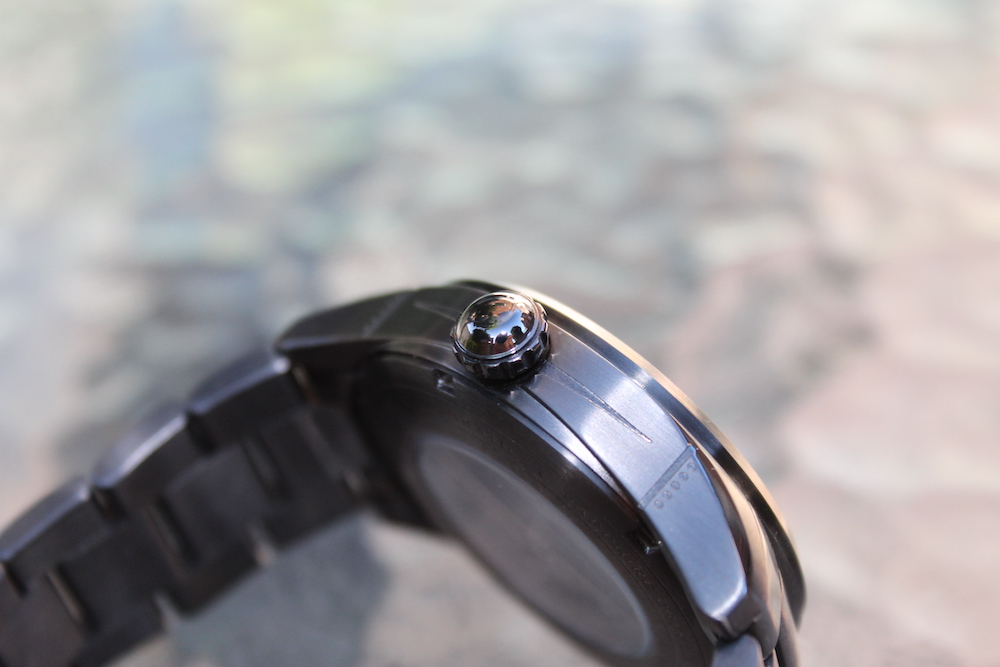 The sides of the case feature some light engraving which is supposed to be reminiscent of the riveting featured on the bodywork of the Spitfire planes. The idea is nice, but the execution is very light and it, unfortunately, looks a little cheap and therefore tacky to me. If they had made lines a little deeper and the ‘rivets’ 3D then that would have had the desired effect and looked much better in my eyes. There is also a horizontal motif around the crown which is supposed to represent the front view profile of the spitfire. In all honesty, it actually does when you see a picture, but unless you see the official marketing material and are told this, it is a little odd otherwise. 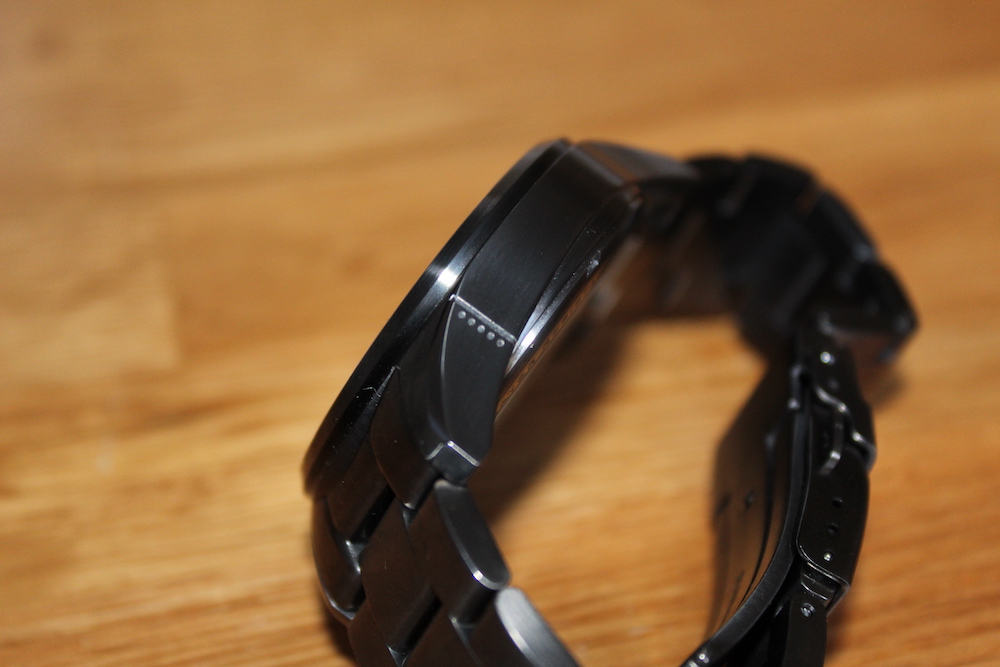 The case is finished in a gunmetal grey IP (ionic-plating) coating. Looks cool and lends a sort of vintage, aged effect. The only downside is that it’s an absolute fingerprint magnet. It was difficult to get photographs without my fingerprints all over it! In day to day use, most people probably won’t notice this so it’s not the end of the world. It looks rather nice though. Covering the dial is a sapphire crystal with several layers of underside AR coating.

Flipping the watch over, you’re greeted by a display caseback showing off the Miyota movement with its customised rotor depicting the watches inspiration, the iconic Spitfire itself. From my previous experience, Miyota Series 8 movements are not the prettiest of calibres, but this rotor does a really nice job of enhancing the aesthetic appeal here. Miyota movements are usually best left under a solid caseback in my opinion, but AVI-8 have made this one worth showing. Splendid! 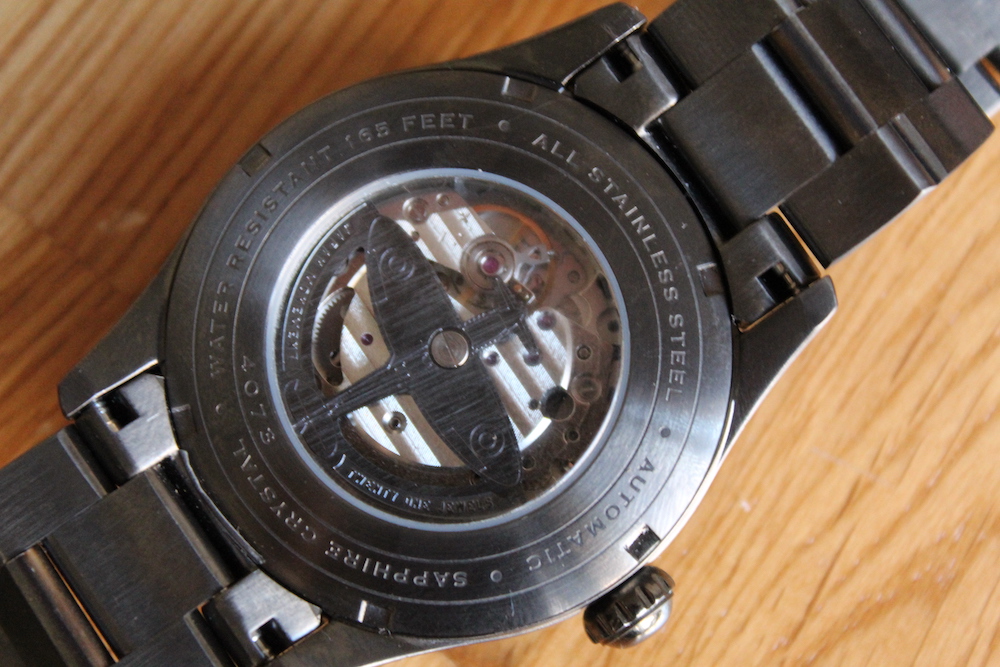 The little presentation box the Spitfire arrived in is actually one of the nicer boxes I’ve seen of this type. It’s small and the perfect size with a small cushion to keep the watch in place when in the box. It has a tweed-like canvas material covering with neat stitching and finishing all over. For something that many will toss in a cupboard and unlikely use again, this is a nice box. It’d be a shame if it weren’t used again! I was definitely impressed. Nice to see the little details and touches are not overlooked. 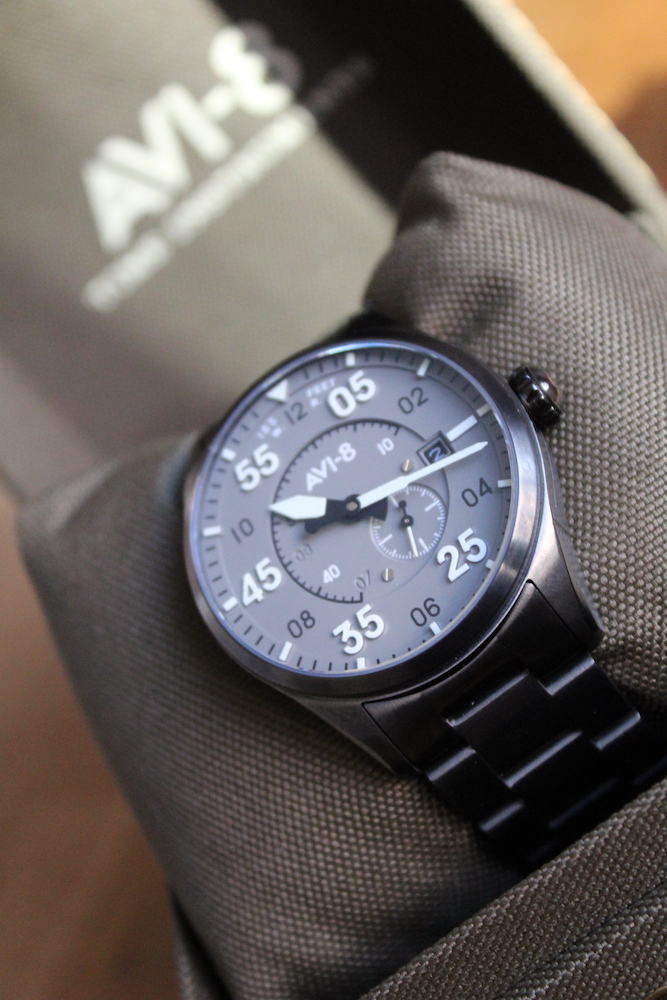 Overall, this watch is quite nice. It’s definitely aimed at fans of planes and the specific styling that goes along with it. AVI-8 did a nice job at channeling the design inspiration of the venerated Spitfire plane. The touches are both subtle and purposeful and mostly not too tenuous. All too often watches which take on the names of military aeroplanes and vehicles miss the mark and the naming seems like a really poorly thought out marketing gimmick. That’s not the case here. The design and naming seems genuine and that’s nice to see. If you’re a fan of military history and looking for a solid pilot watch with some nice design touches, you could definitely do far worse than trying out AVI-8’s Spitfire. 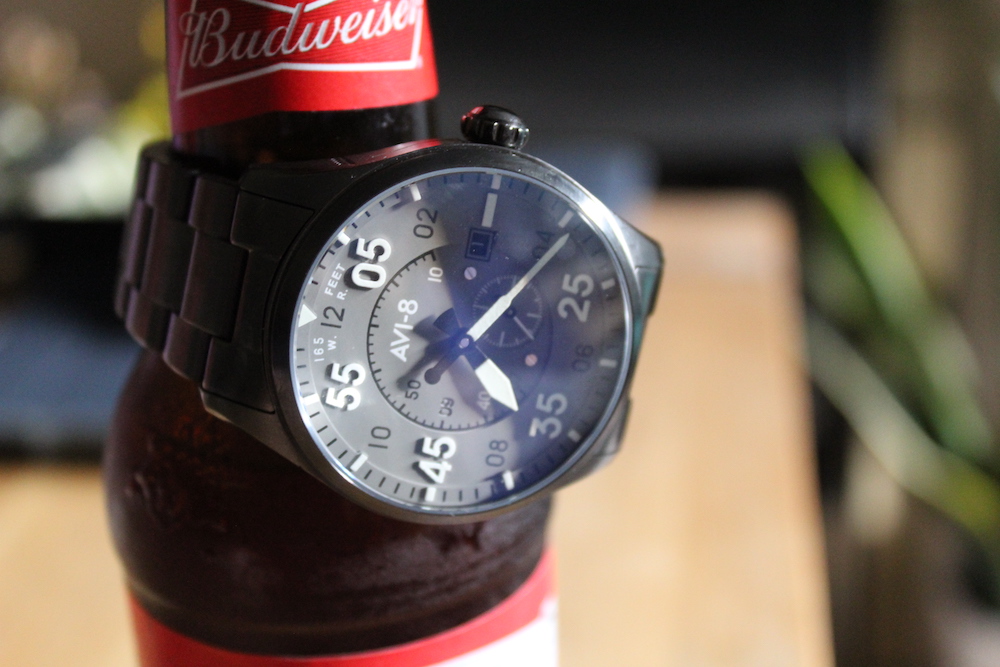 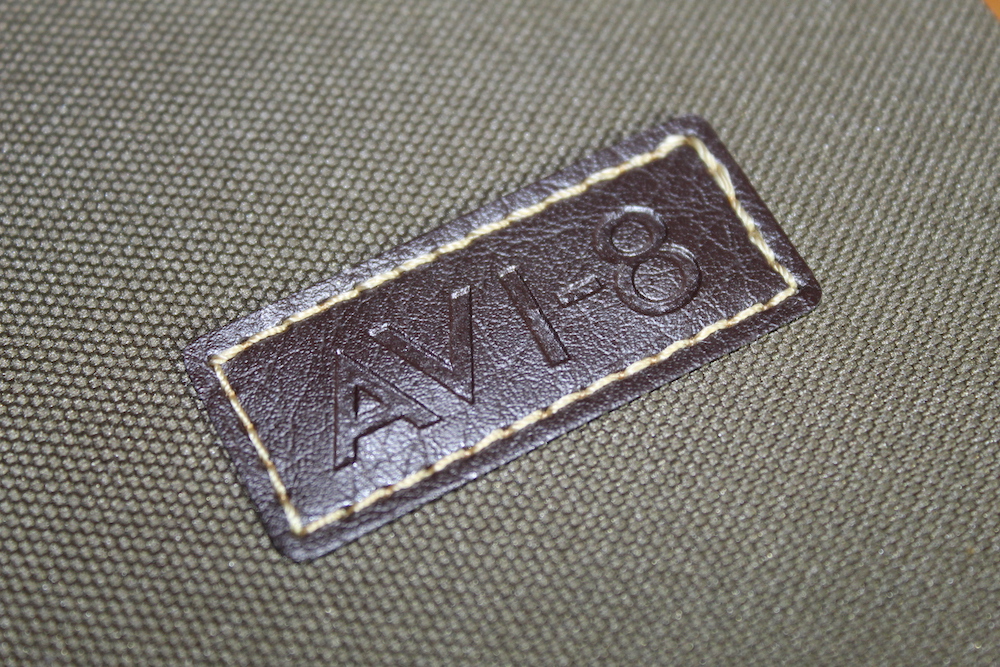 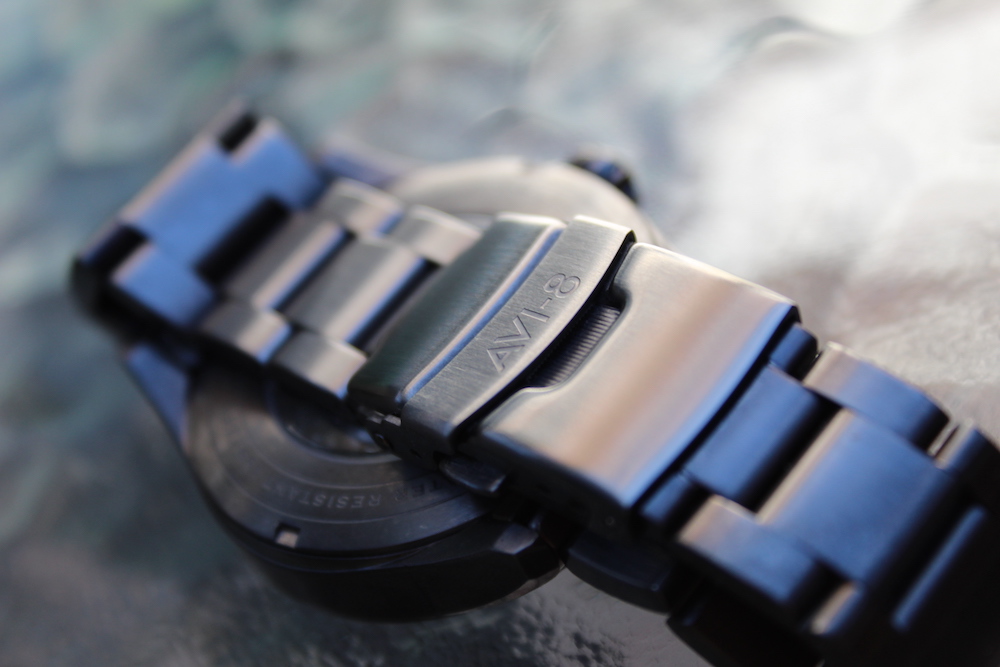 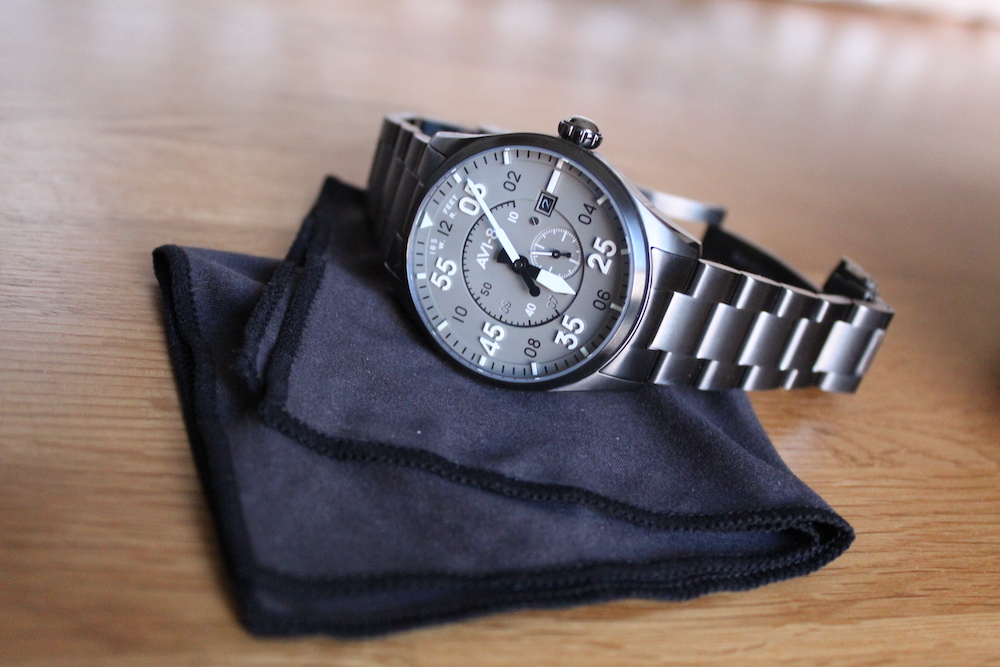