The rocky unveiling of Patek’s 6007A raises some interesting questions about how legacy brands communicate the strengths of their new designs.

Despite being intrinsically tactile objects, the watch industry now exists largely in the less-tangible realms of social media. With the traditional trade show model seemingly on its way out, slowly but surely, we’re increasingly formulating our (very strong) opinions entirely on digitally communicated information. Even without the absence of physical experience, our visual first impressions of a watch can be make-or-break, and I’ve long felt like the quality and thoughtfulness of many watch brands’ visual marketing needs to elevate to meet this new way of working. 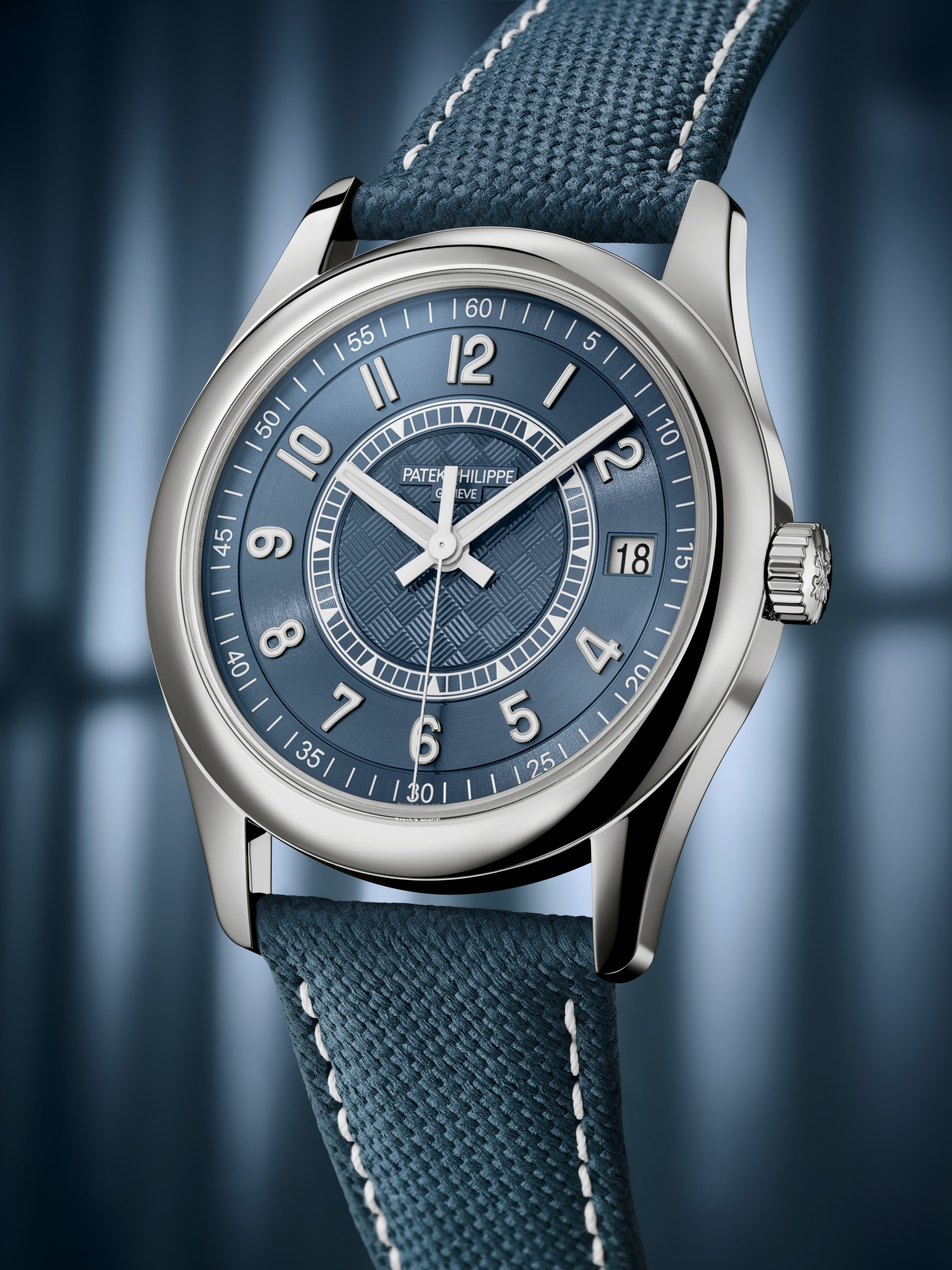 Last week, Patek Philippe announced the 6007A steel Calatrava, a new limited-edition piece to celebrate the opening of their new Geneva manufacture. I like it quite a bit, that bloody caseback aside, 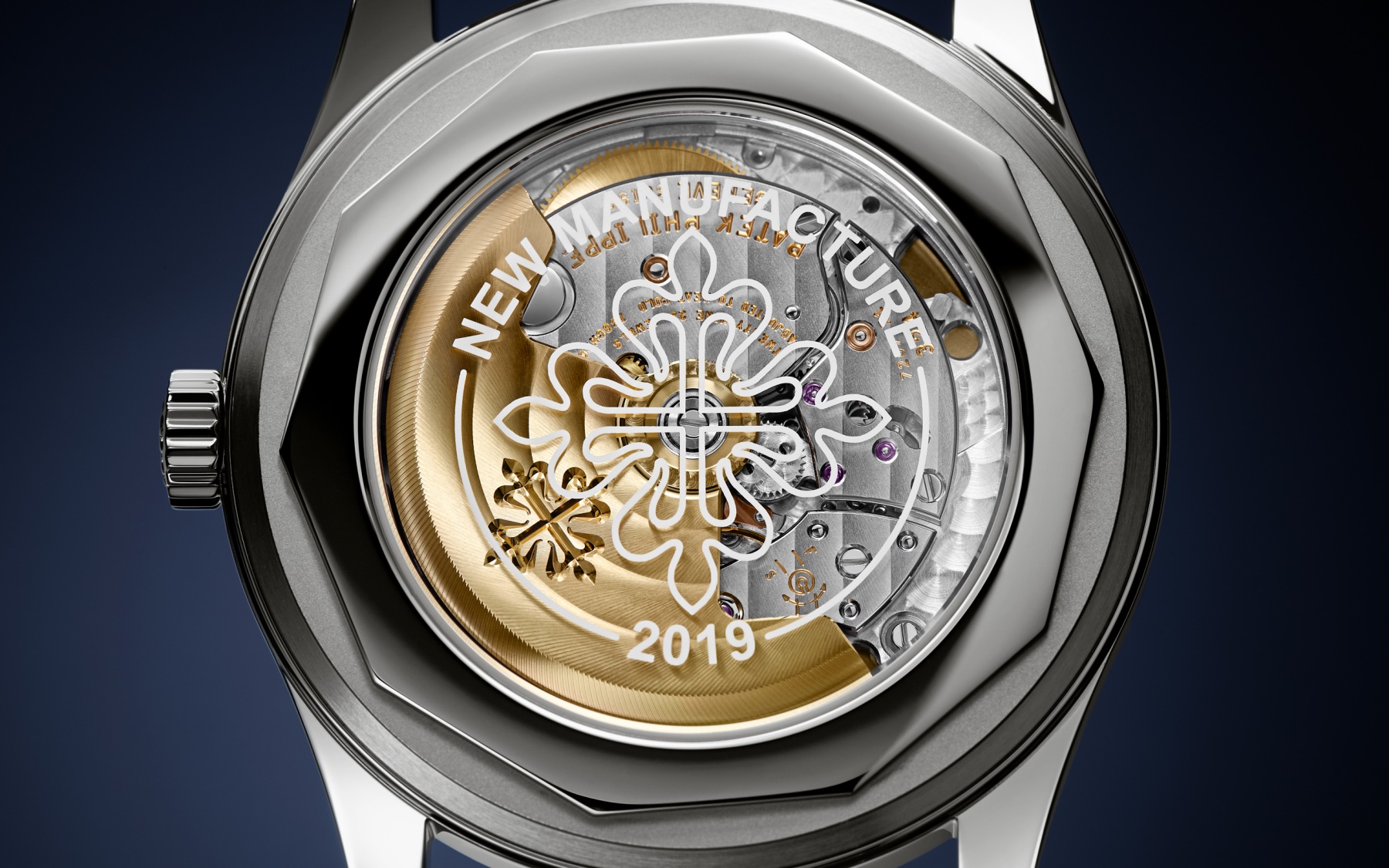 and our own Dave Sergeant was also a fan. A great many of you, however, were not. Like, at all. This isn’t in itself noteworthy, us watch folk are always fighting over something, and the sheer subjectivity of it all is what makes discussing the merits of design products so fun and interesting. Nonetheless, the particular case of the 6007A got the rusty cogs of my whisky-addled brain turning. Call me a w*nker (no really, do it, I deserve it), but I think there’s a conversation to be had here that goes beyond date windows and machine stamping.

So, if you can bear to recall the trauma, what was your introduction to the Patek Philippe Ref. 6007A-001 Calatrava? For me, it was the clinical, top-down dial shot shared by everyone from Hodinkee to, well, us. 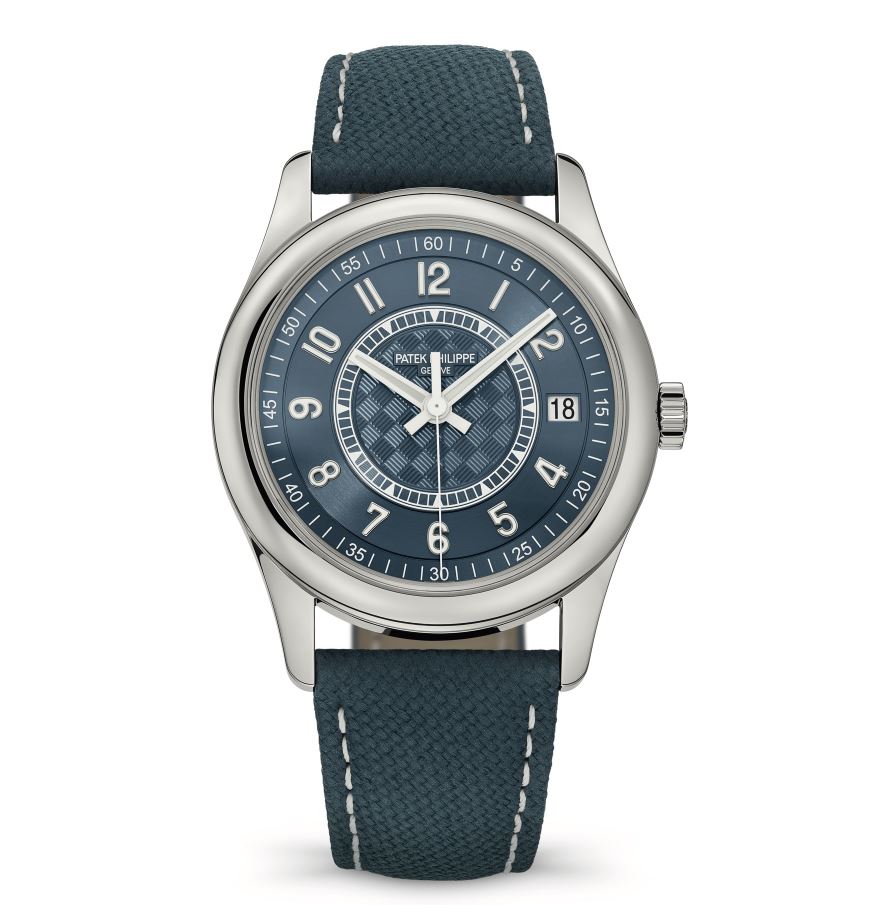 It’s a bit gross, isn’t it. The dial kind of seems like a skittish mishmash of elements, everything in collision. The blue dial looks bland: we wasted no time in likening it to a Citizen, much to everyone’s amusement. 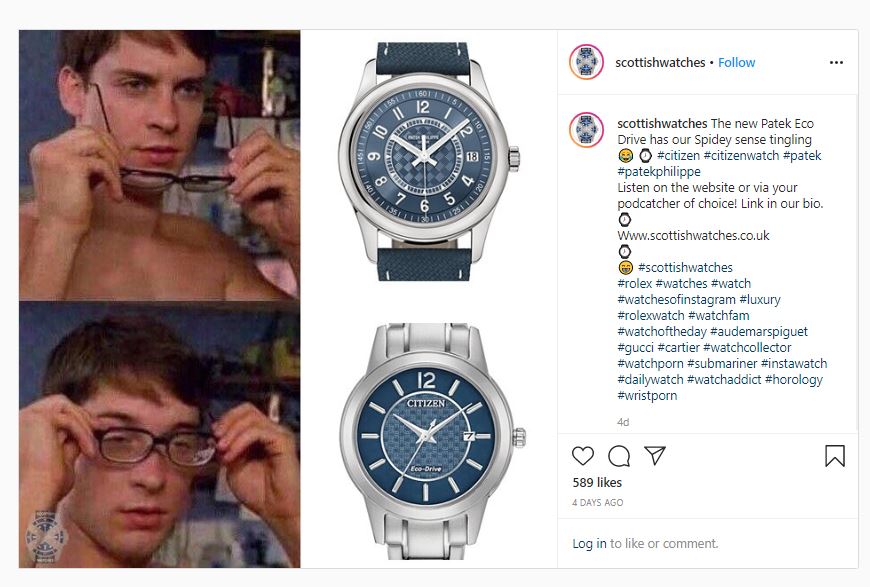 The problem with all of this is that the 6007A appears to be heavily reliant on three-dimensionality, like any Patek. Looking at some of the other product shots buried on the Patek Philippe website, a more nuanced picture emerges, one that’s more true to my personal experience with the brand: the gorgeous applied numerals, the lush finishing and textural variety, depicted far more clearly and effectively. Anyone who has seen a blue-dialled Patek of any kind in the metal will know the kind of sumptuous grey-blue gravitational pull the 6007A will have when it’s in your hand; all joking aside, quite unlike any Citizen.

This is why I love Patek so much: at their best, their pieces are holistically perfect. It’s not just about the dial, or the movement, or the case; it’s about all of the above, working together as one ultra-refined form. Seeing a Nautilus or a classic Calatrava in the metal, it’s impossible to argue with their iconic statuses, even if you’d previously thought them to be mind-numbingly dull (as I very much used to). So, in the context of the 6007A, why do Patek seem so determined to utterly fail in communicating these selling points in the first instance?

First impressions matter and they can be hard to unpick, particularly when it comes to digital pile-ons. Several academic studies (here’s one) have confirmed that collectively formed impressions appear to be the most “stable” (or rather, rigidly held) over time, although we don’t know why exactly this is the case.

Regardless, the point is this: when you’re pitching your product to the braying masses of the internet, we’re probably only going to give you one shot.

The top-down dial shot of the 6007A is a garbage first impression, and I feel like there’s a lesson to be learned here. It’s not as though such shots are irrelevant- they’re as valid as clinical side-on case shots in terms of understanding the proportionality of a design in the clearest possible manner- but, given how inherently romantic, pretentious and artistically subjective the whole watch thing is nowadays (whether you want to admit it or not), is their relevance overstated?

Does it really have to be the “default” way to depict watches when, as others before me have also pointed out, it’s in many ways so divorced from the actual experience of wearing and owning them? Would it be such a bad thing if brands like Patek took a bit more creative license in unveiling their latest creations, to help us see them the way they do? 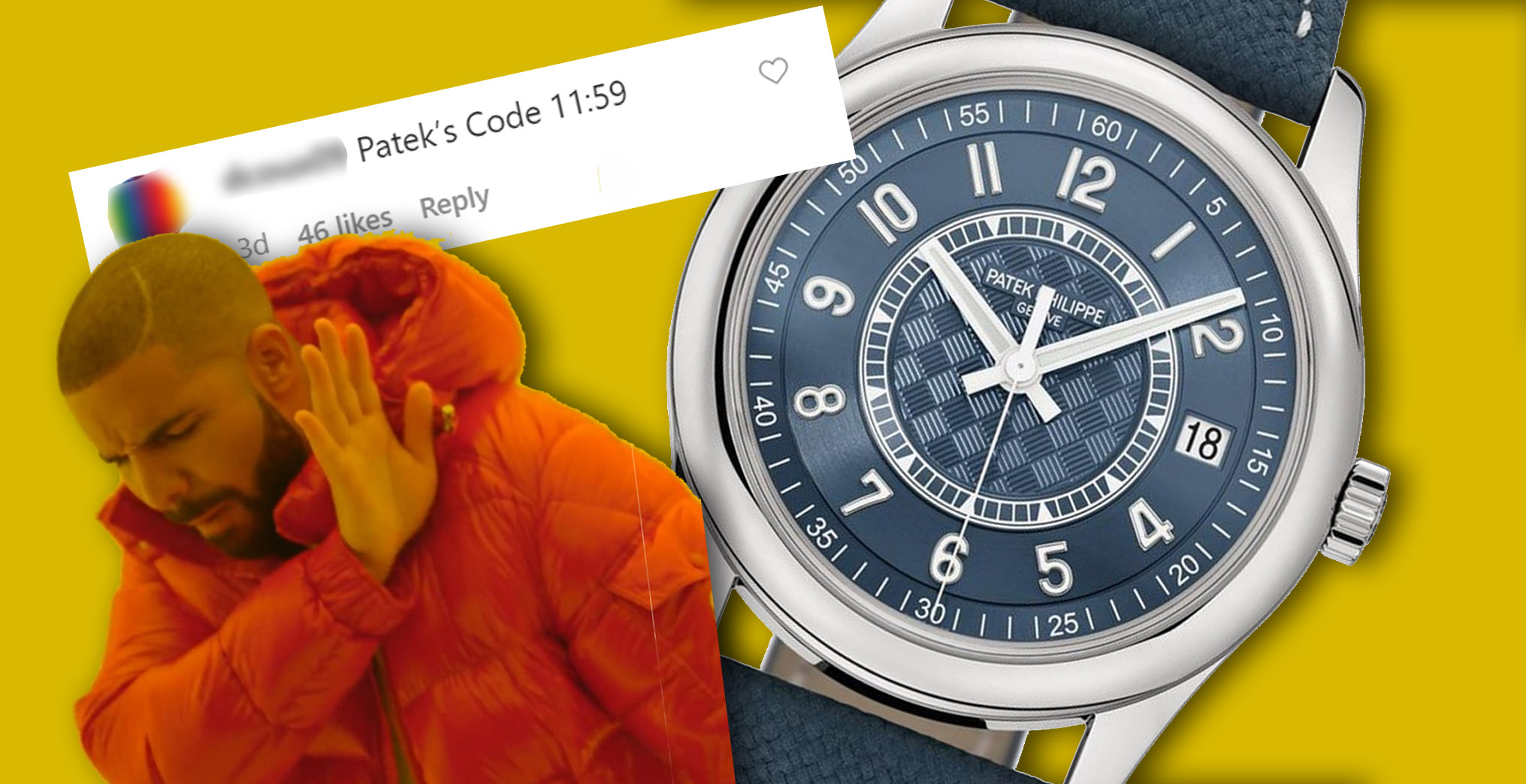 One Instagram comment caught my eye in particular: “Patek’s CODE 11:59”. Damn. Ice cold. Cast your minds back 10 years or so, to 2019. The Audemars Piguet CODE 11.59 debacle was…intense, wasn’t it? The pile-on was absolutely relentless, and I can’t deny that I was part of it, gleefully dunking on AP’s decision to release a gaudy, tacky piece of s**t that looked like a MVMT. 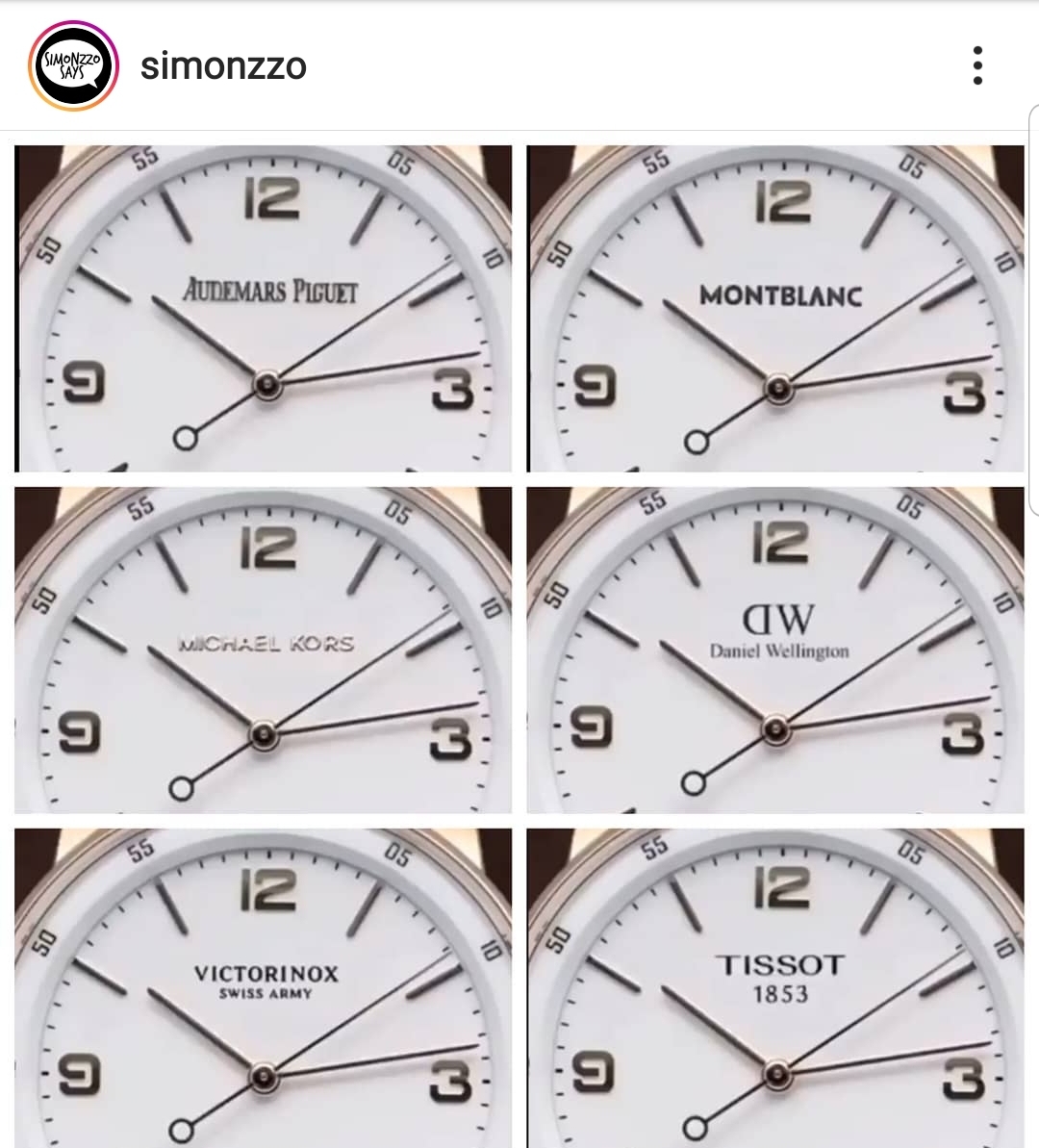 You were calling for their Holy Trinity status to be revoked, and I was right there with you. Damage control from the AP camp, seemingly dismissing all criticism as merely the reactionary squealing of narrow-minded plebs, didn’t help either. Thing is, it only took a few days for me to start feeling a little bit off about the whole thing. It didn’t take much research to realize that the Code 11:59 dial, proportional specifics and that f***ing date window aside, was in fact fairly consistent with classic AP designs (much as Patek’s 6007A directly references the dial layout of the ref. 5000) and to develop real admiration for its head-spinning case design (which I still find amazing) and generally the infectious attitude of gaudy unapologetic ostentatiousness. 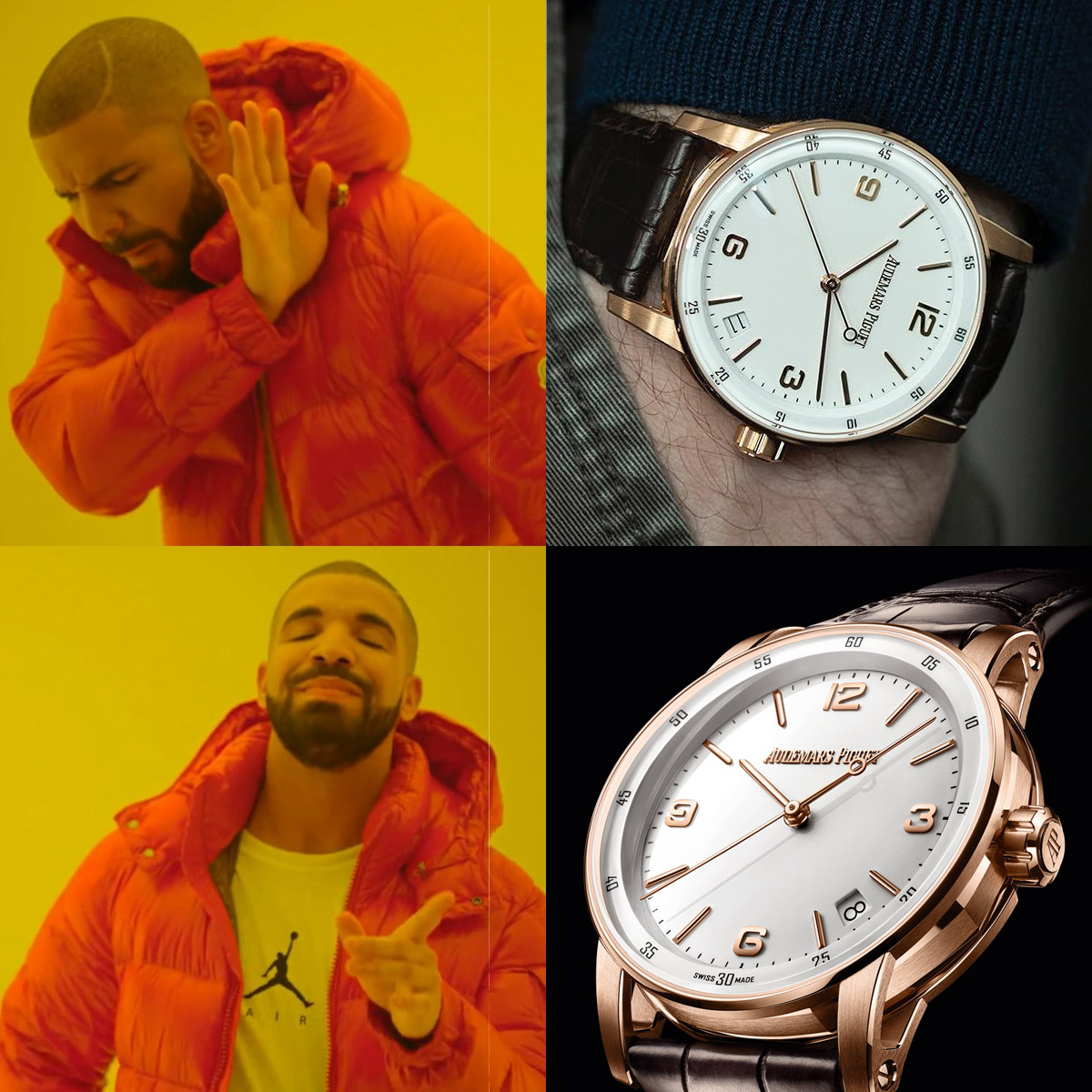 Not for me, not even a particularly great design, but certainly not the inconceivable, head-scratching aberration I initially assumed it to be after all. I’m increasingly encountering people who have entirely re-evaluated their take on the series, and though I’d wager the design is simply too fundamentally divisive for the CODE 11.59 to actually attain “cult classic” status in the long-run, I reckon public perception will only continue to soften. 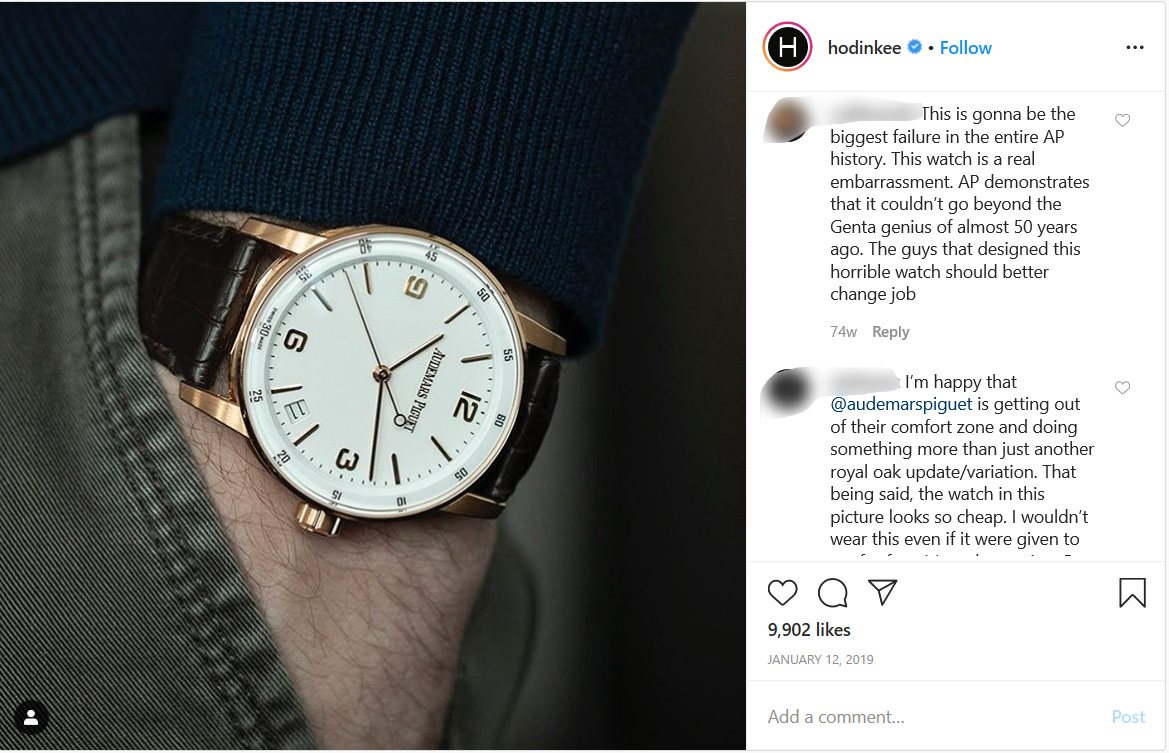 What does this have to do with anything? Well, anecdotal though this may be, I find it interesting to think back to what my first impression of the CODE 11.59 line was. It was, as for many other people, the photo shared to Instagram by Hodinkee, who had partnered with AP to help launch the line (undoubtedly a pretty bad few days for the collective blood pressure of the ‘Dink squad).

The shot in question was the white dial time-and-date variant of the series, in the traditional Hodinkee “hand in pocket” wrist shot format. Oh yes: nothing but dial, baby. That big, empty, gaudy, MVMT-esque white dial. The response was, well, exactly what you’d imagine. We were repulsed. No shade on Hodinkee themselves: it’s just how they do their wrist shots, and they probably couldn’t have foreseen the sheer ferocity of it all, but I’m definitely seeing some kind of correlation here. On the Hodinkee site’s CODE 11.59 feature, where a video feature and wider range of photographs were available, the response from commenters was still noticeably divided and largely negative, but far more nuanced and with more discussion centred around the intriguing case architecture and finishing. Many of the live photos provided by Hodinkee were somewhat drab and failed to convey the watches’ strengths, but there was enough for people like me to understand that maybe this was at least something more than a total failure. 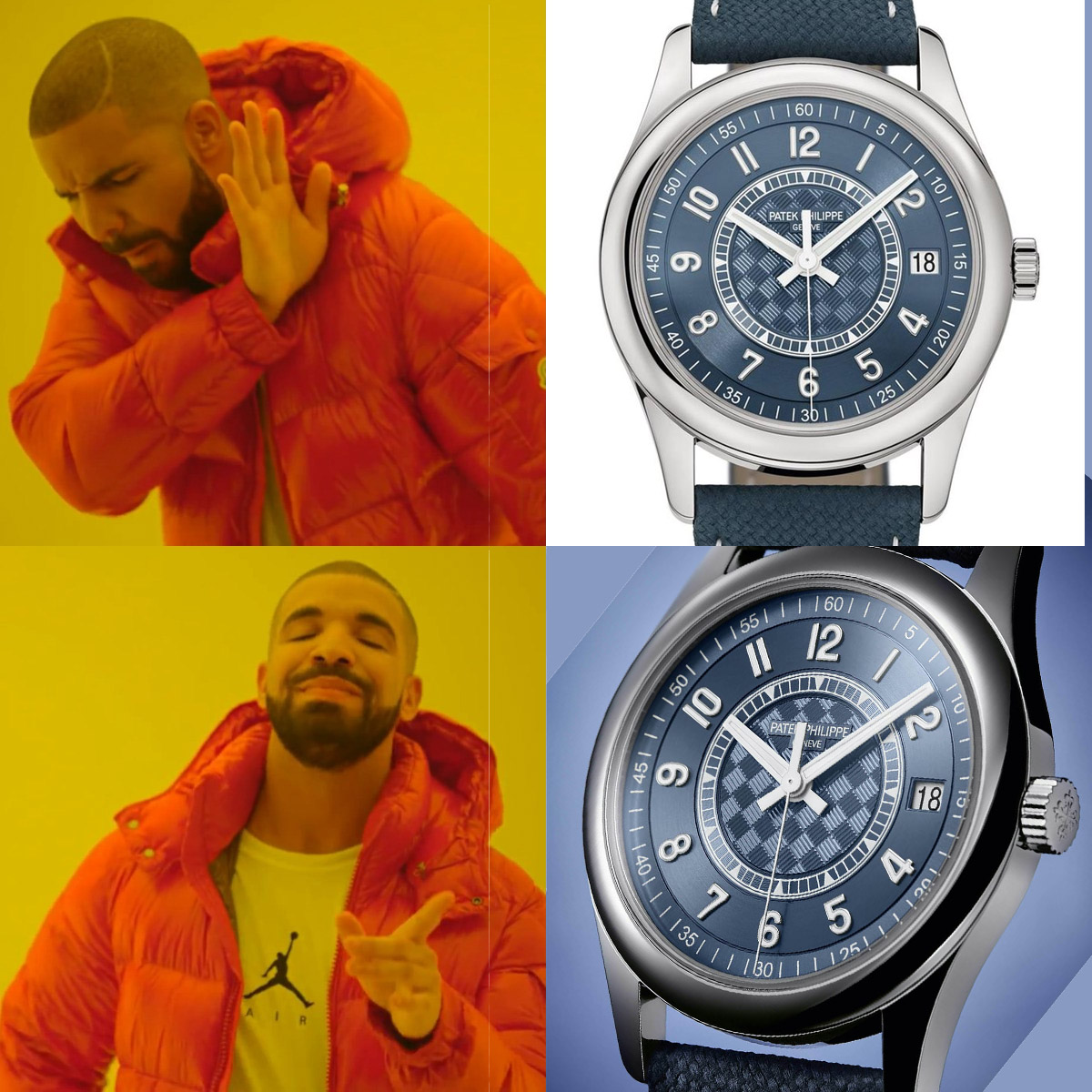 To make matters worse, AP’s own product shots of the CODE 11.59 range were actually pretty well-considered. They convey the correct vibe for appreciating the series’ merits: positioned in angular fashions that show off all dimensions of the design, against a sultry red backdrop that conveys a sense of glamour and indulgence. It doesn’t magically make the dial layout good or anything, but it does efficiently communicate an ethos, and a vibe, and it makes the overall design language of the series seem somewhat less aesthetically debased, at least to my eyes. Had AP led by carefully revealing these sorts of images, and opened the floodgates on live coverage from the likes of Hodinkee later, could some of the chaos have been mitigated? 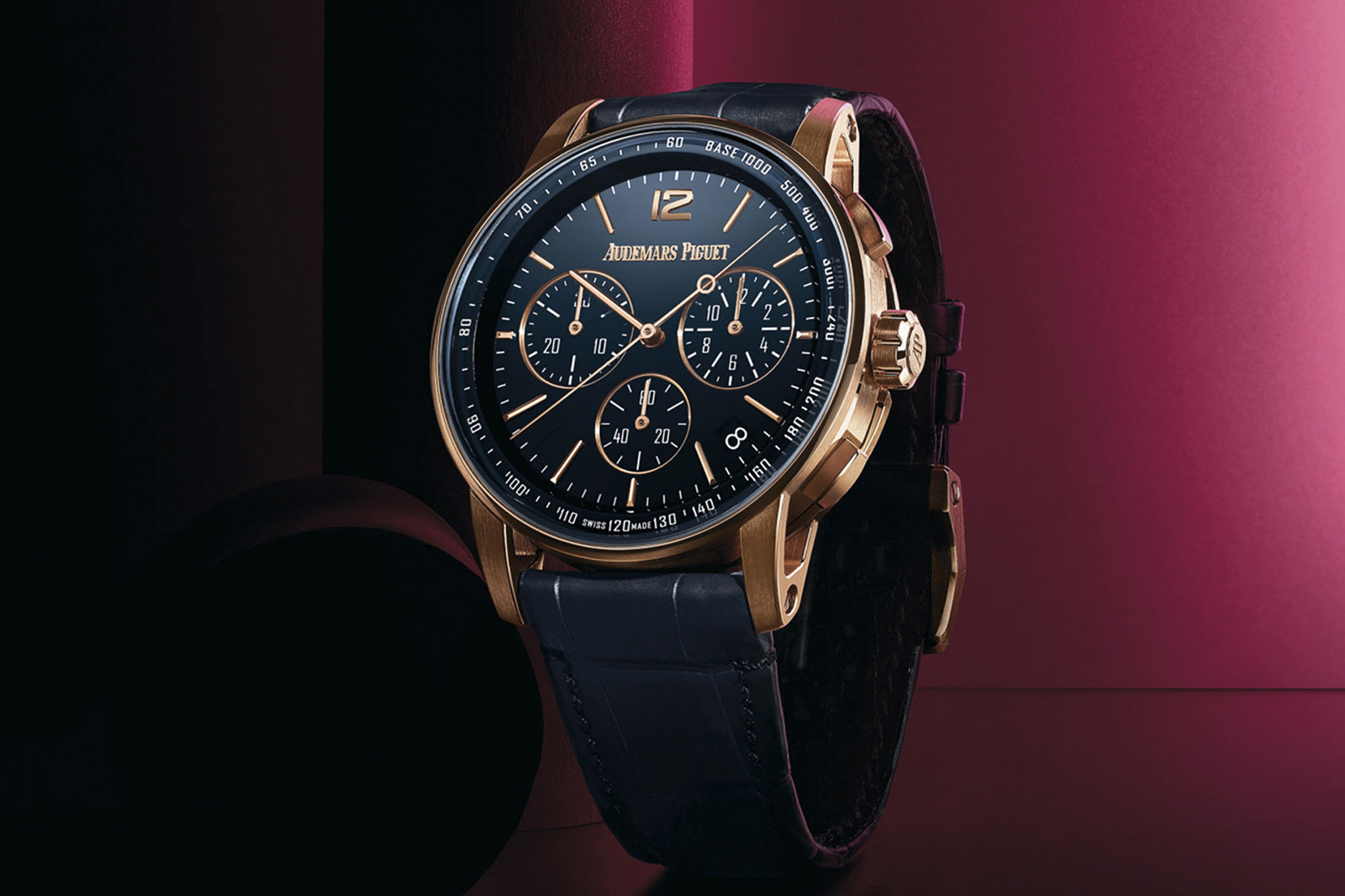 Look, I know it’s entirely possible that I’m doing what we Scots refer to as “talking pish”. You know what Ian Betteridge said about headlines that end with a question mark. But I’m truly intrigued by high-profile messes like the Patek 6007A and CODE 11.59. Both cases are arguable misfires in some respects, and certainly represent some unusual decisions from prestige brands, but I feel like steps could have been taken to cushion the blow and give them more of a chance on release.

Both releases were instances of watches that drew heavily from their respective brand’s design heritage, and yet were derided as totally bizarre and out-of-character missteps. Both releases boasted impressive case designs and use of texture and finishing, but were written off largely for their dials. And, yes, both releases were cursed with s**t product shots that did nothing to sell their respective merits. Is this something we can avoid in future? Should brands exert tighter control on how their latest designs are disseminated to the world- for instance, unveiling a single, highly-curated and stylized product shot from a single source, that captures all the USPs of the piece, with the more clinical top-down/side-on shots coming later on once the initial unveiling has been digested by the public? Is there a way to mitigate the sheer rigidity of collectively-formed first impressions? I don’t have the answers to these questions, but I feel like they’re becoming more and more important.