In recent days, I have been very fortunate to be able to enjoy one of the most iconic and unusual divers available in the current market. Thank you @rom.tolousse for making this possible! My intention had been to test it at sea, its natural habitat. Unfortunately, bad weather conditions have prevented me from doing so. When I do get a chance, though, I promise you updated images, and most likely a full additional post along the line of the article which featured the SEIKO Tuna.

Without further ado, let’s review the history and the peculiarities of this magnificent diving tool: the ZRC Grands Fonds. 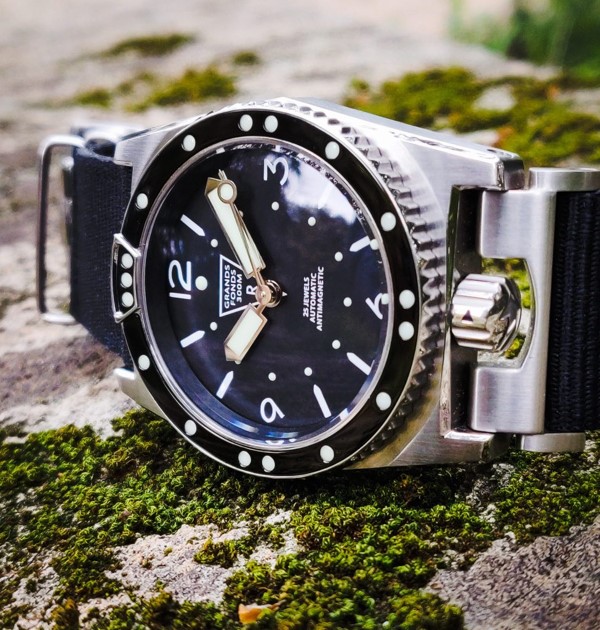 ZRC was first established in 1904, in Geneva, from the partnership between Edmond Zuccolo (Z) and Joseph Rochet (R).

In terms of the history of this particular piece, we must go back to the early 60s, when ZRC received a commission from the French Navy to make a watch suitable for its elite divers. This assignment included the express desire of combat divers to guarantee maximum water tightness while solving the issue they had with crowns located at the three o’clock position. Their concern centered on its supposed fragility and the danger of breaking it due to a sudden blow during combat operations, given that its position was considered to be highly exposed.

If we examine the images below, we can appreciate that the first ZRC divers had a standard three o’clock crown configuration that differed substantially from the new prototypes that would emerge from this specific commission. 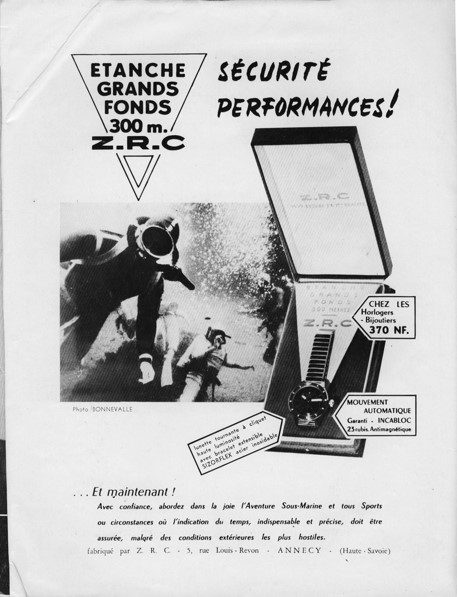 In the image below, we can see a cross-section of the watch.

Another characteristic deemed very important for the safety of the “Third Division of Toulon Mine Clearance Divers’ Group” was the requirement for anti-magnetic properties. This was achieved via a special treatment undergone by the steel from which the case was manufactured.

Very soon, the watch became very popular among the divers of the French Navy and transcended the military field, sailing with the crew of the “Calypso”, commanded by Jaques Costeau, as Monochrome Watches discussed in this rather fantastic article.

In the following image we can see a vintage Grands Fonds advertisement of the period. 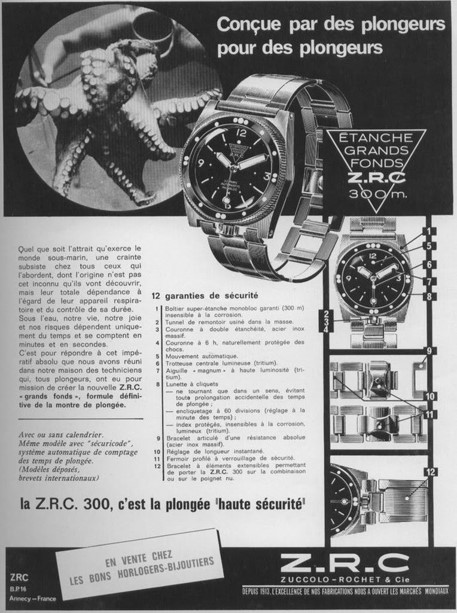 ZRC was one of many watch brands that virtually disappeared when the so-called quartz crisis hit the industry. It was not until the past decade, when the current fever to resurrect old archive models began, that our protagonist was reissued, in 2014 to be precise. 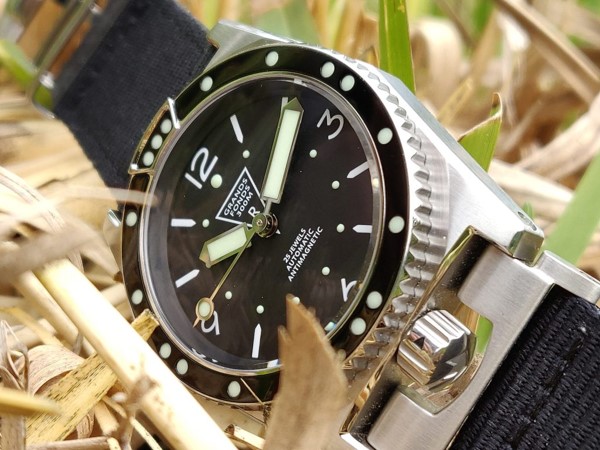 And, to tell the truth, the watch is very true to the original. 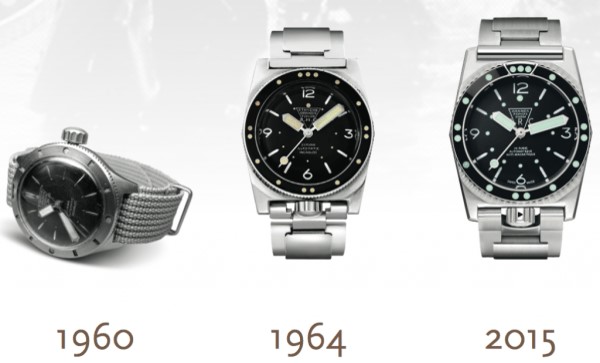 The first thing that caught my attention is that, despite its undoubted bulkiness, the watch is really comfortable on the wrist. Although, at first sight, the angular and straight lines of the case may not convey an impression of imminent comfort, once it is worn these doubts are quickly dispelled. This is due to the end links of the bracelet, or of the strap, which more than end links are in fact swivel handles. This allows for a perfect wrist fit. 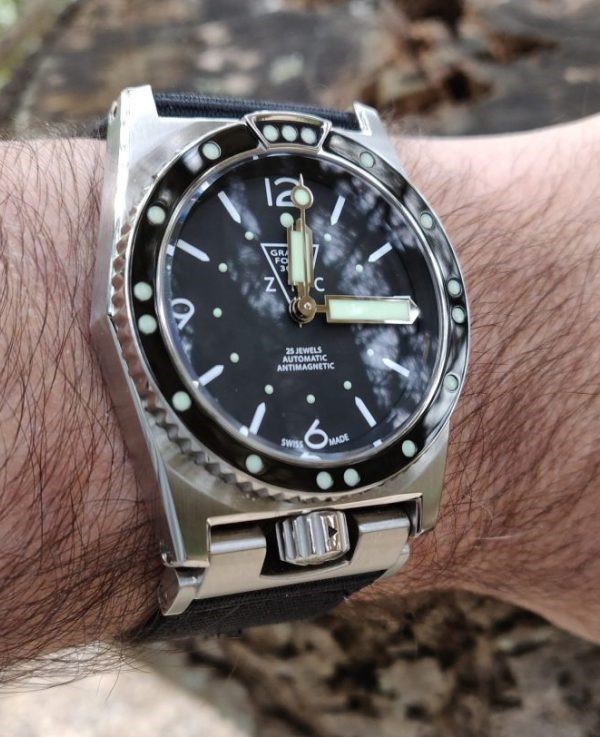 The first impression, once worn, is that it is a very well-built watch indeed. 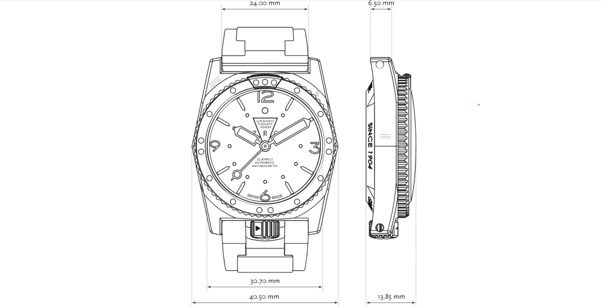 One of the basic aspects in which the current case differs from the original model is that it is no longer of monobloc construction. It is not something that particularly bothers me, on the contrary, it can be an advantage when it comes to servicing or regulating the caliber, although it does lose some of its “savor-faire”.

I do not have access to the detailed anti-magnetic properties of the original model, but this reissue complies with ISO 764, although this is also not unusual for any currently manufactured diver watch. It should also be noted that it complies fully with the ISO 6425 standard for diving watches and is rated to 300 m depth. 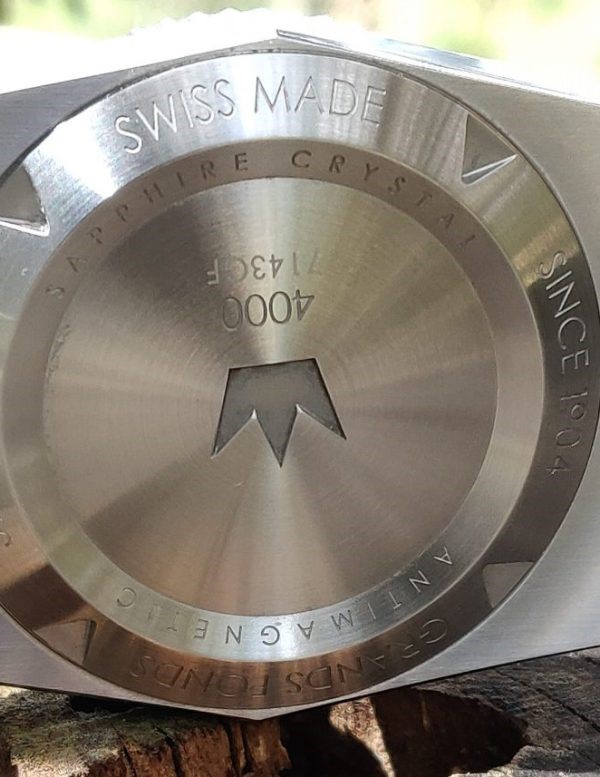 The unidirectional 60-click bezel offers a precise and smooth experience in use. It also features a curious novelty presented by the brand, with respect to the original, which is the simple bezel interior cleaning system, known as the “ECS Easy Clean System”, which is still patent pending, we believe. It consists of a small opening, or groove, through which the inside of the bezel can be rinsed out with running water, thus avoiding being caked up by the remains of sea salt that could be introduced during submersion, thereby impeding the free rotation of the bezel. 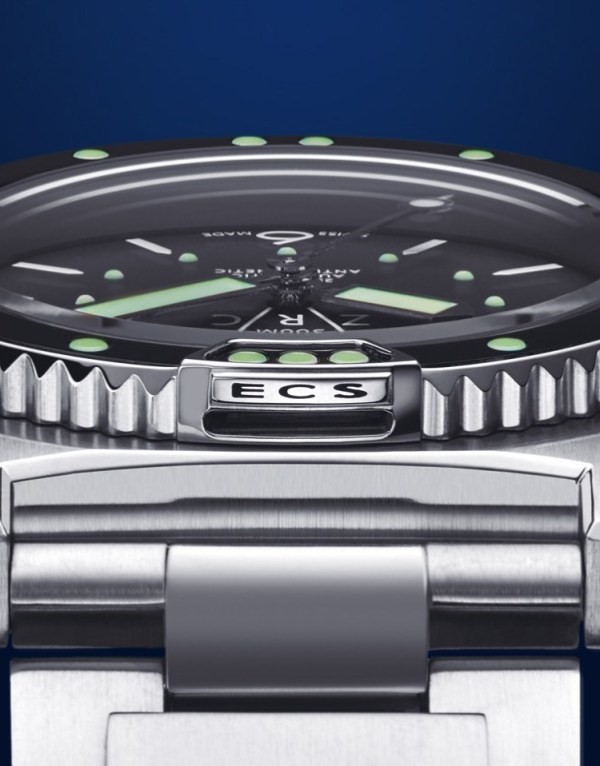 Footnote: The ECS™ is a technical solution to an issue encountered by the mine clearance divers of the Marine Nationale during their many dives: salt crystallizing in the gaps between the bezel and case, thus impeding its rotation. For the 2015 re-issue of the Grands Fonds 300, ZRC has developed and patented a functional solution – the ECS™ was born. A unique system for cleaning the inside of the bezel by circulating fresh water that dilutes and evacuates the sea salt. The ECS™ is the ultimate tribute to the original Grands Fonds and is perfectly in tune with the brand’s identity.

The crystal is made of sapphire, is 3 mm thick and is ever so slightly domed.

The lume is very powerful as well as durable, I can swear to this. In fact, it one of the most powerful that I have ever encountered. 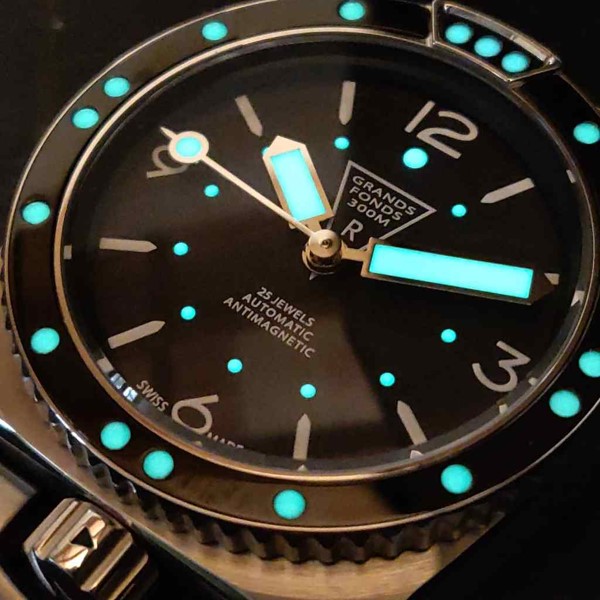 The caliber used is the reliable and robust ETA 2824-2 élaboré grade, or the Sellita SW200-1 élaboré. The brand’s website does not specify which of them is provided and I imagine it depends on the stock available at the time of manufacture.

The thing that worried me most about the watch was the crown position, and whether this would allow easy adjustment of the time. Once tested, I can say that it is not comfortable to adjust the time on this watch, yet it is not as difficult as I had first imagined. I guess it is all in the mind… The crown is unscrewed clockwise, which is the really unexpected feature, but an arrow on the crown reminds us of this.

Manual winding is possible once the crown is unscrewed and is clockwise in the traditional way (the watch uses a standard caliber, after all). For the date adjustment, the crown is pulled to the first position, although this is the French Navy reissue, so it is a no-date version. For the time adjustment, the crown must be pulled to the second position. There are satisfactory clicks when pulling into each successive position, but it must be noted that the top of the swivel end link is in the way when pulling and manipulating the crown.

In the image below, extracted from the watch manual, that can be downloaded from the company’s website, the process is explained. It is standard, except for the location of the crown and the clockwise unscrewing of the crown. 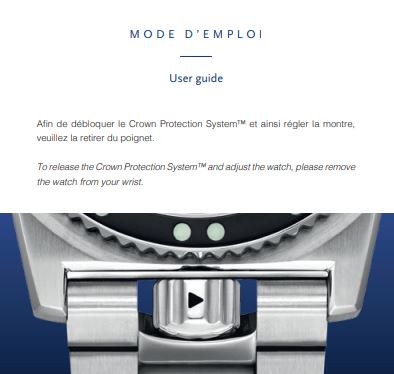 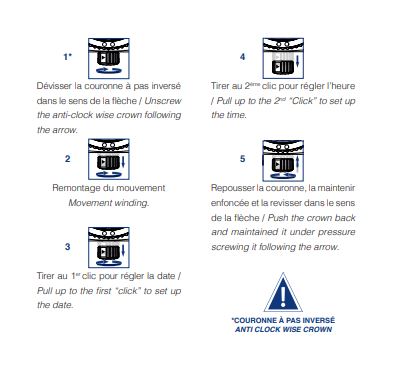 Without a doubt, the reissue of the ZRC Grands Fonds has engendered a rebirth for the brand. The rejuvenated ZRC is becoming well known in a multitude of sporting events and maintains a close relationship with civil and military diving associations.

If you like diving watches with a distinctive DNA, a rich history and a different aesthetic, without a doubt the Grands Fonds should be one of the options to consider.

As I said at the beginning of this review, I promise you a further update when it can be returned to its natural habitat, the marine environment, but the weather conditions will have to improve for this. 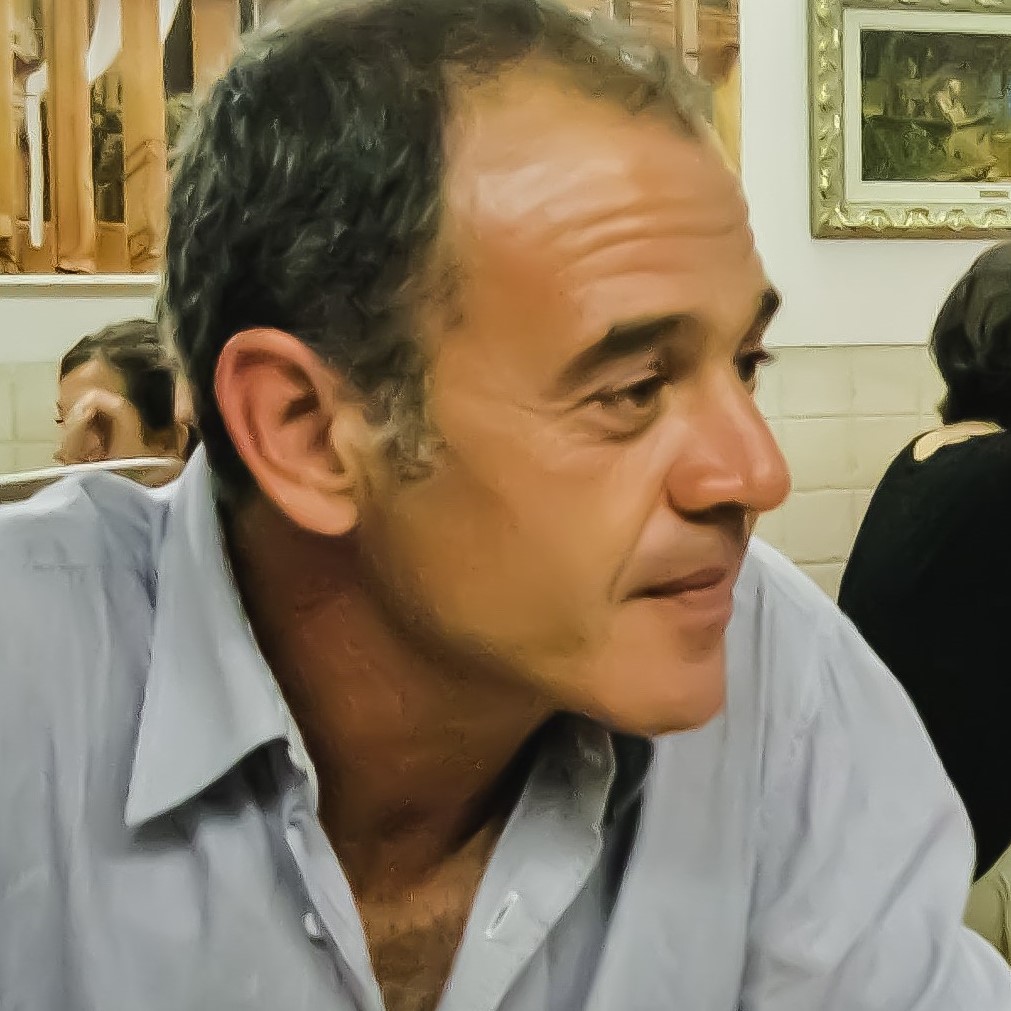