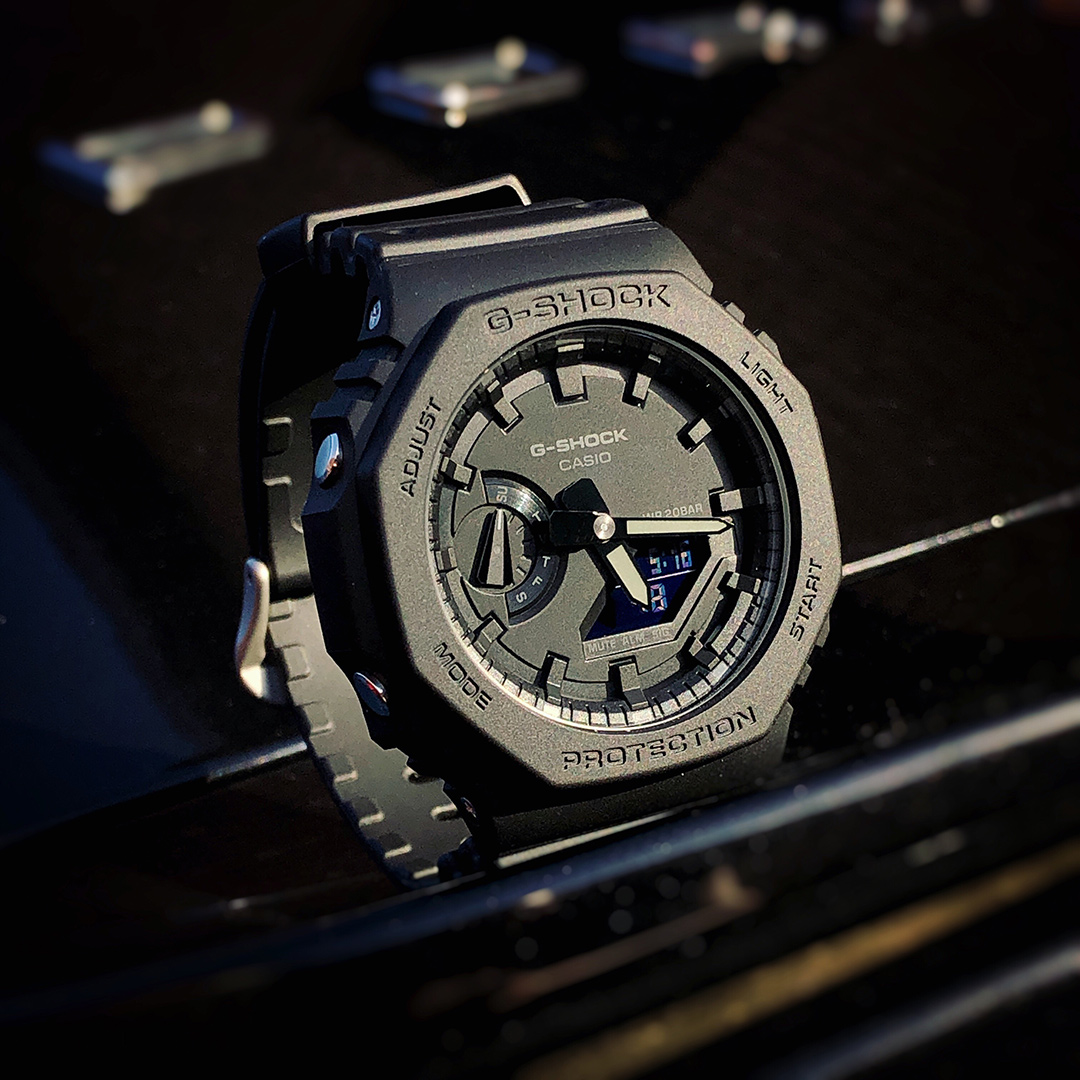 Now let’s get something straight from the off, there are a ton of new G-SHOCK watch releases every single year. In fact almost every month there are new models, new colour ways and new designs a plenty so why all of a sudden has one new design really taken the online watch world by storm? Let’s find out!

My G history has been quite short, spanning maybe only a year and a half at best. Always a Casio fan from childhood but never wanting to stump up the big bucks for G-SHOCK when I was younger and then when I got interested in mechanical watches, the thought of spending automatic money on an all terrain digital just didn’t make sense. 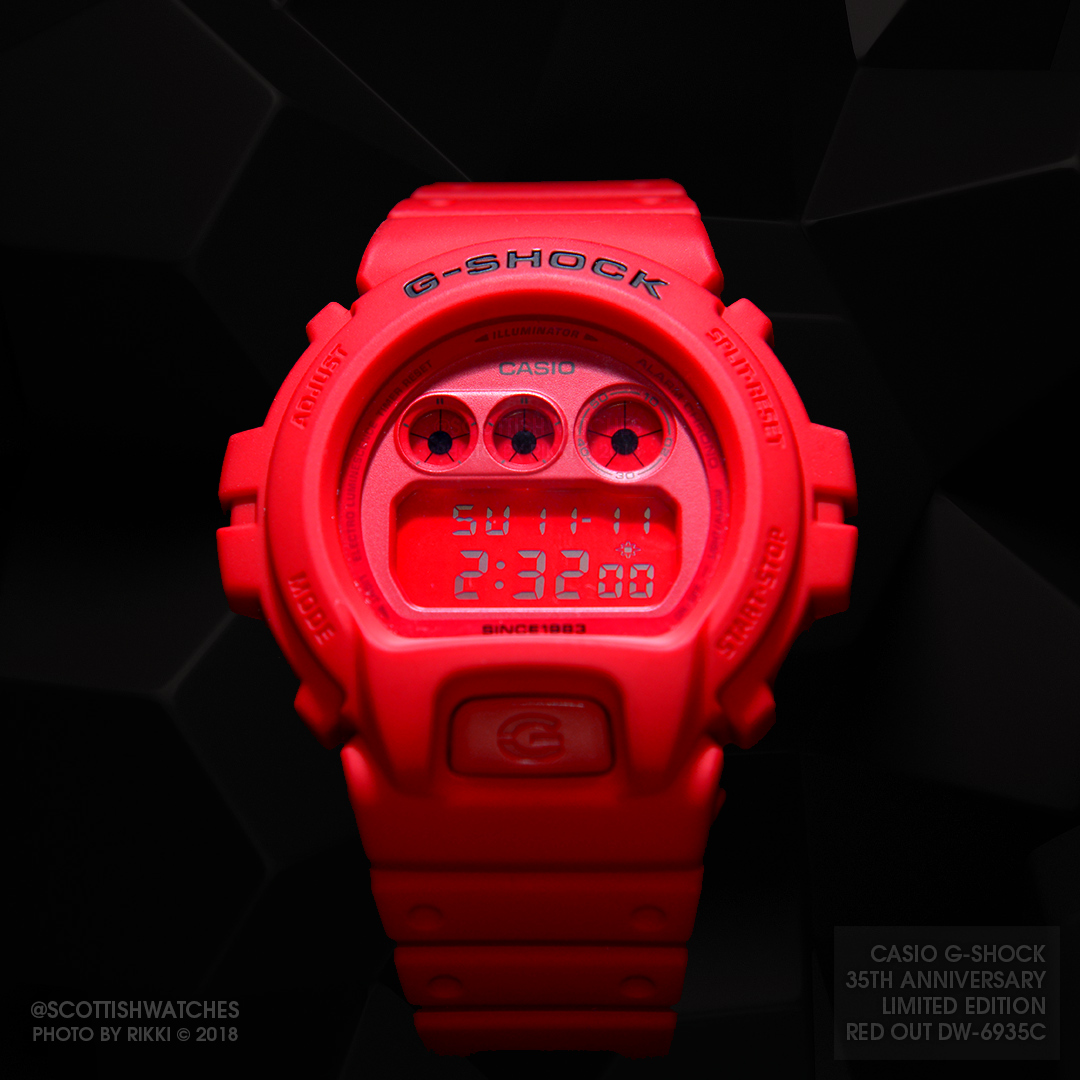 Thoughts change though and last year I spotted the release of the 35th anniversary Red Out limited editions but as with most things G related they were all sound out. It was by pure chance while wandering Schiphol airport in Amsterdam that I happened across one lonely G-Shock DW-6935C sitting in a shop display and immediately pounced. I followed this up by buying the full metal G-SHOCK almost exactly a year ago while at a RedBar meeting in Glasgow (my first ever) and this is the watch purchase that got me and cohort Rick chatting on Instagram and on to launching the Scottish Watches website and podcast. 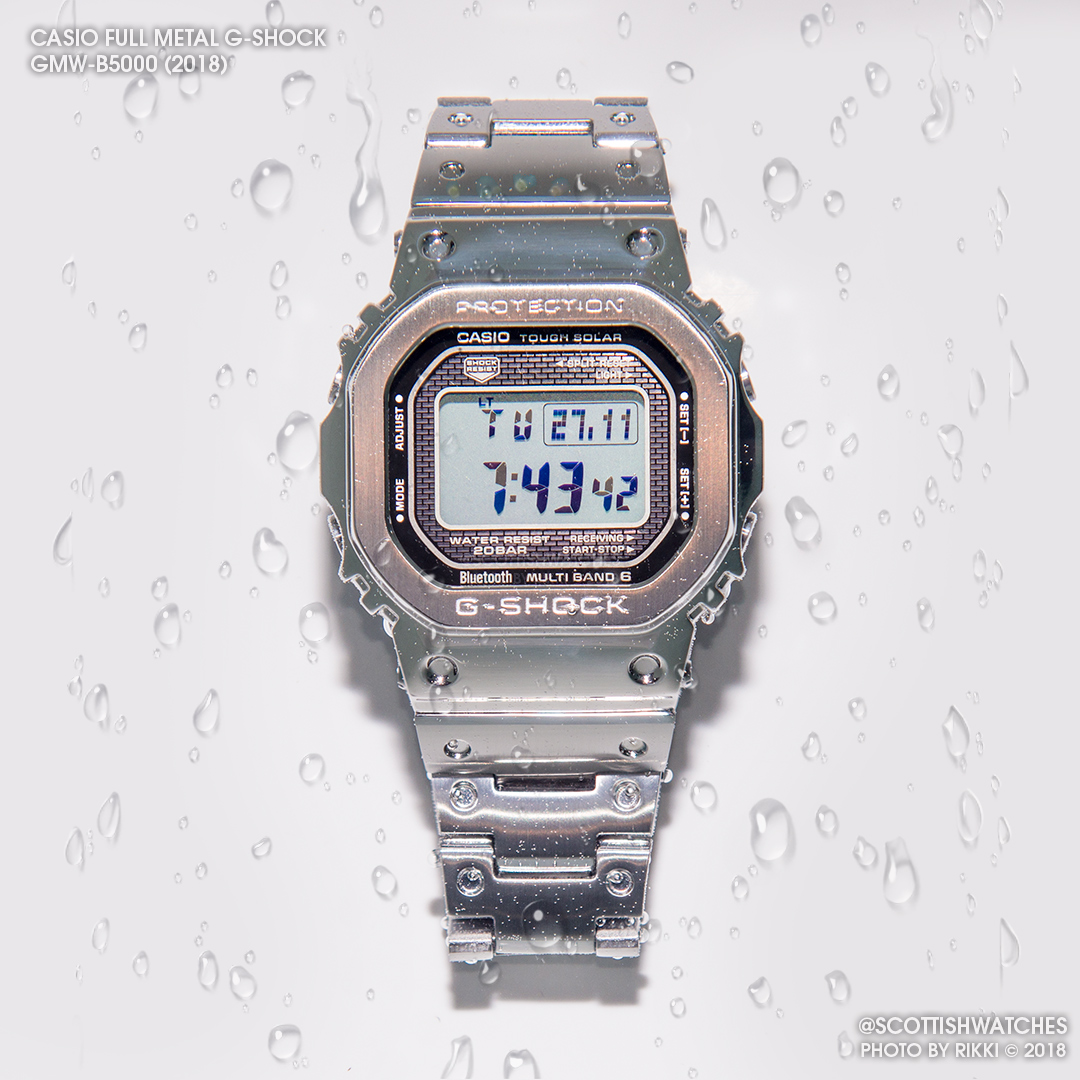 Over the past year a massive range of new models have been released and I nearly took the plunge on some jellyfish translucent numbers but at the last minute pulled back. I’ve dropped small bucks along the way though on some other Casios but never from the G-SHOCK line. That was until a few days ago.

The GA2100-1a1 appeared on the gram and elsewhere online and the case shape and dial just grabbed me. It looks like a stealth Audemars Piguet Royal Oak, possible a carbon off shore even. Blacked out with darkened lume, inverted LCD and that tell tale octagon bezel, it just looked stunning. 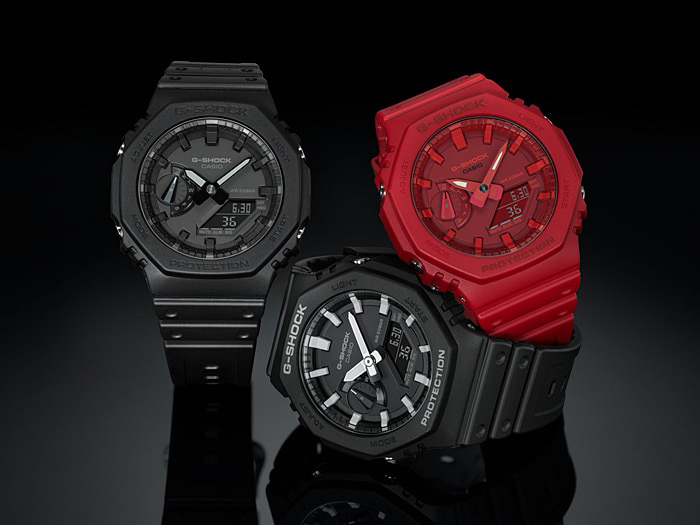 I mentioned it on an edition of the podcast and put a call in to my local G-SHOCK emporium, James Porter and Son in Glasgow’s Argyle Arcade. It wasn’t in stock but Simon said he would place an order and give me a call. A few days later my inbox pinged and a trip to Glasgow was scheduled. 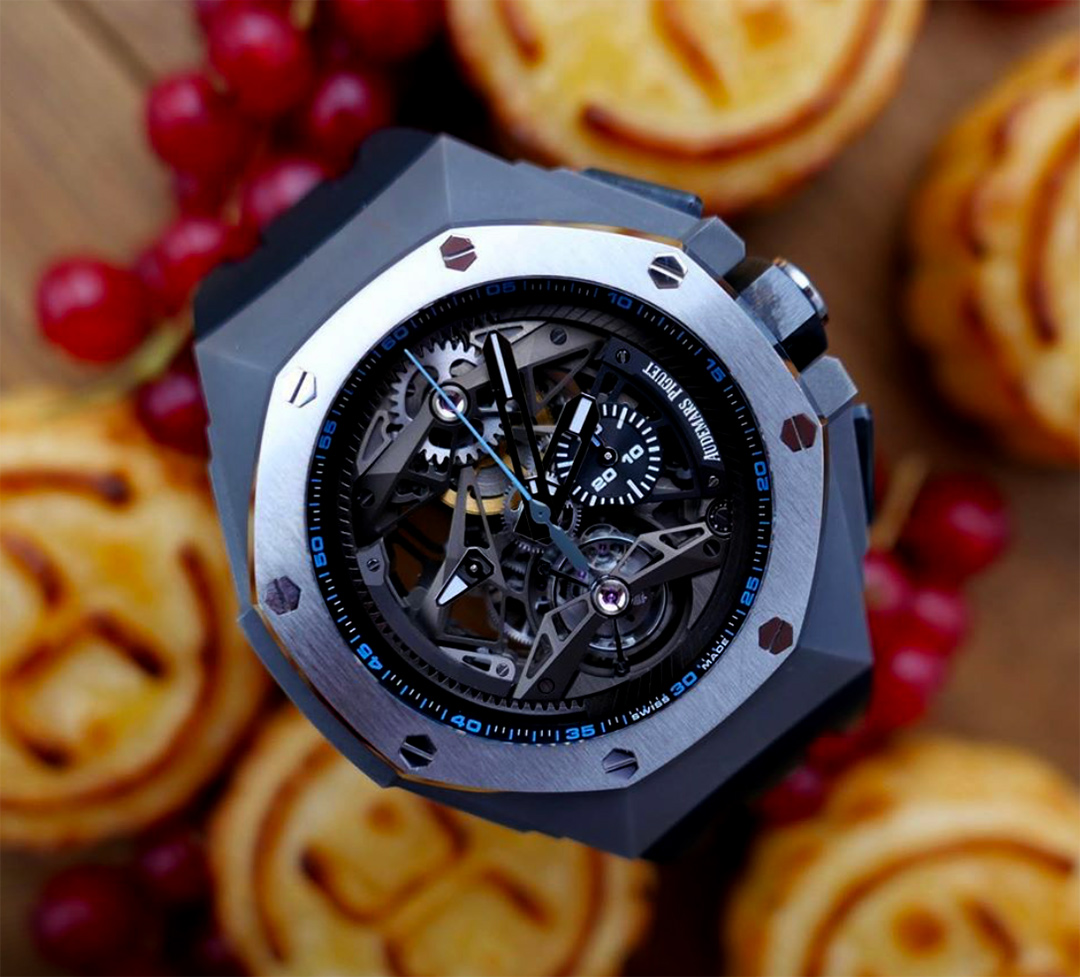 The trip to town turned into a mini watch meetup where TheTickTockCollector, HalfWatchTuesday co-creator Jumping Jalapeno and WatchDeclan were assembled in Mappin and Webb. After playing with some high end pieces we set off to see Simon and cross his palm with silver. When the black version of the 2100 came out of its box, Omair (Jumping Jalapeno) who had already ordered his elsewhere online, turned into a giddy school kid and bought another one there and then so he didn’t miss out on those new watch feels. Zipping past looking over the new Seiko 5 range Simon had just landed plus a visit to pick up a repaired Tudor and it was off home to play with the new toy.

This is probably the part of a watch review where someone would gush over the box and packaging but lets just put that to bed right away. It comes in a standard G-SHOCK box with standard tags, foam and destruction manual. Now lets see the beast!

The first thing you notice about the watch is that its dark – real dark! In fact in anything but ideal light you’ve got yourself an expensive rubber bracelet. This isn’t a deal breaker as when there is light, or when you manage to set the LED to display for more than 3 milliseconds, you can kinda tell the time, ish. 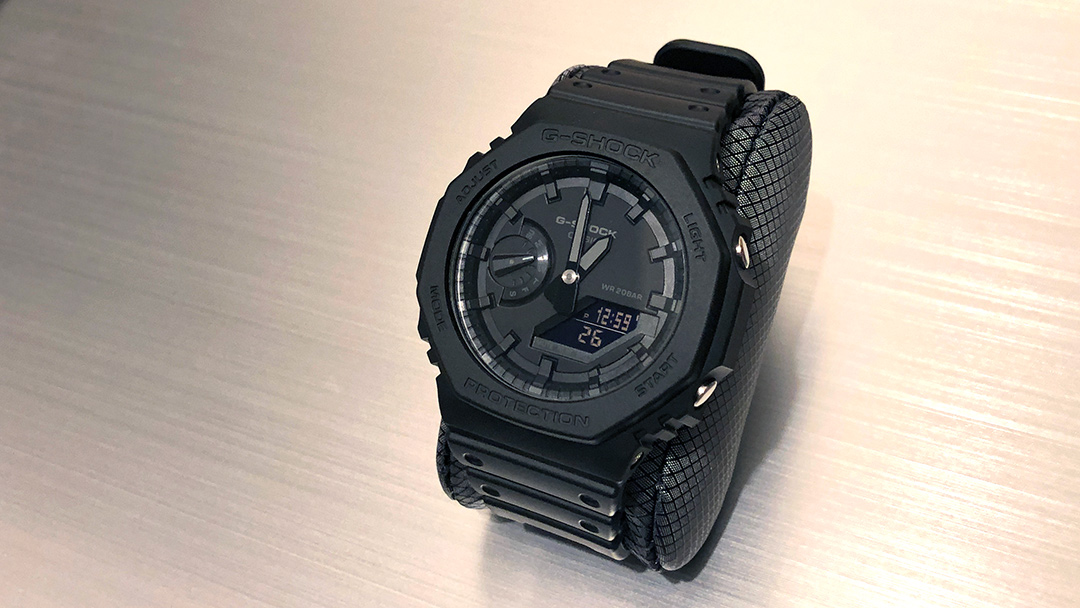 The full watch and strap is matt black or dark grey depending on the light hitting it. The only parts in contrast are the hardware buttons, strap screws and buckle. This sounds good but I’d actually far prefer they were all PVD or DLC black too similar to what I have on my RedOut edition from last year. 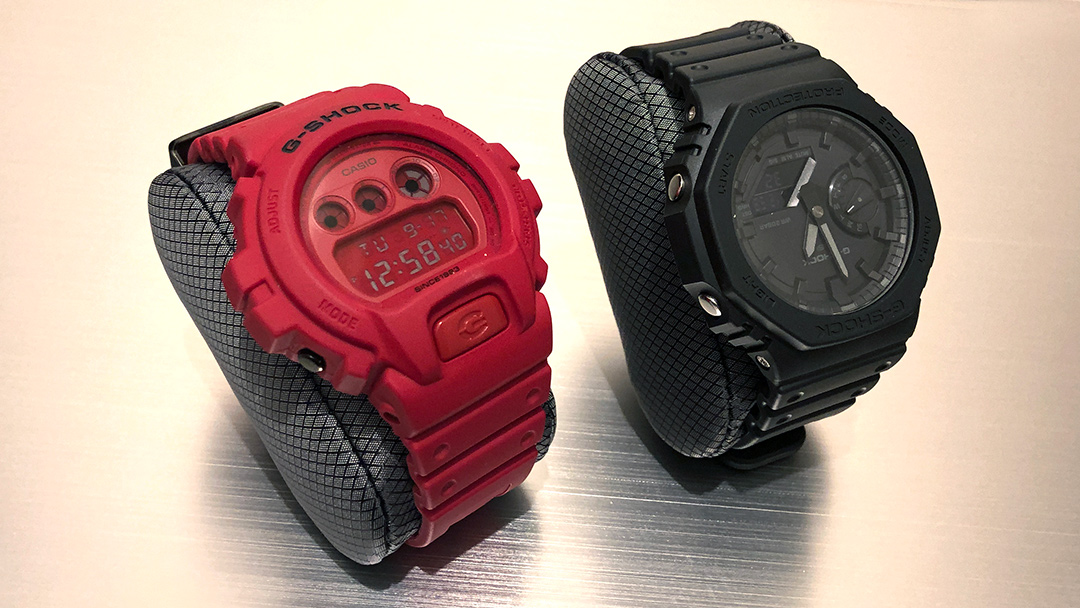 Starting with the bezel and we’re off to the best possible start. The bezel makes the watch. The octagon is a classic shape that works so well on a watch. On an anadigi G-SHOCK it ticks all the boxes of having style while looking different from everything else that’s come before it, at least where my limited knowledge of G-SHOCKs is concerned (correct me in the comments if I’m wrong).

On the blacked out version the embossed PROTECTION, G-SHOCK and button labels are all unpainted then you have the dial which drops down to a valley from the rehaut and chapter ring down to the lowest level where the tiny LCD panel lives. The shapes along the way play with whatever light managed to enter the watch and again just looks amazing.

I don’t know if there is any AR coating on the glass or if it’s due to the matt, sandblasted style finish, but no reflections are present and even photos with my camera phone cut right through the glass to the dial with ease. 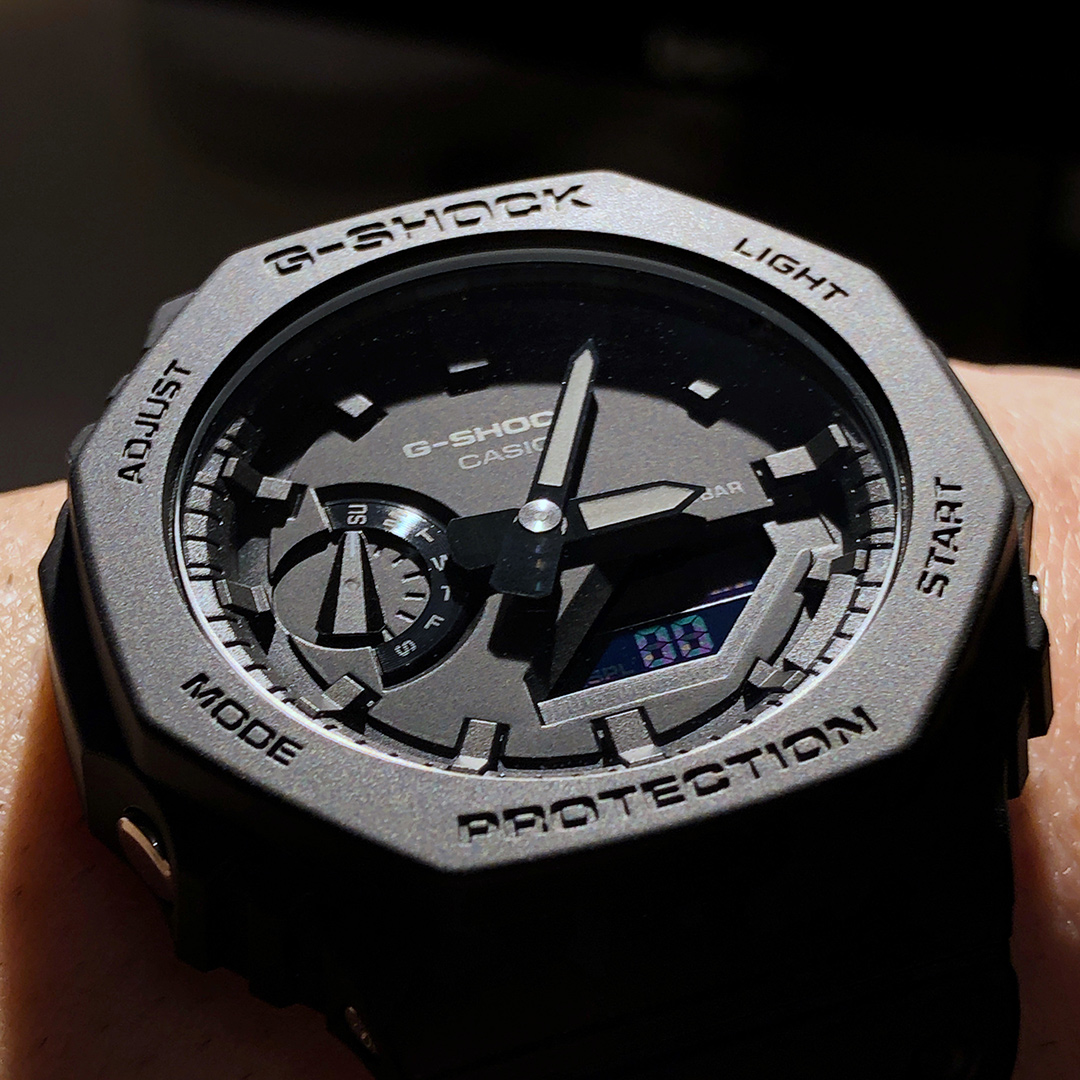 On the left there is a retrograde style day of the week arc, followed by a two hand central analogue time display. The hands are black with dark grey lumed inners which really do beam a lot of light well after dark, something that truly surprised me.

To the right and flowing downward in a diamond shape is the previously mentioned token gesture LCD area which is hard to read at the best times and whenever you have the misfortune of the hands sitting between 3 and 6 you’re in for a real bad time, until you learn to press the light and mode buttons at the same time, momentarily moving the hands out of the way – but be warned, this can take anywhere from 5 to 15 seconds to do, so if you plan on I don’t know, using the actual functions of the watch like the timer or stopwatch you could be waiting a while to get going. 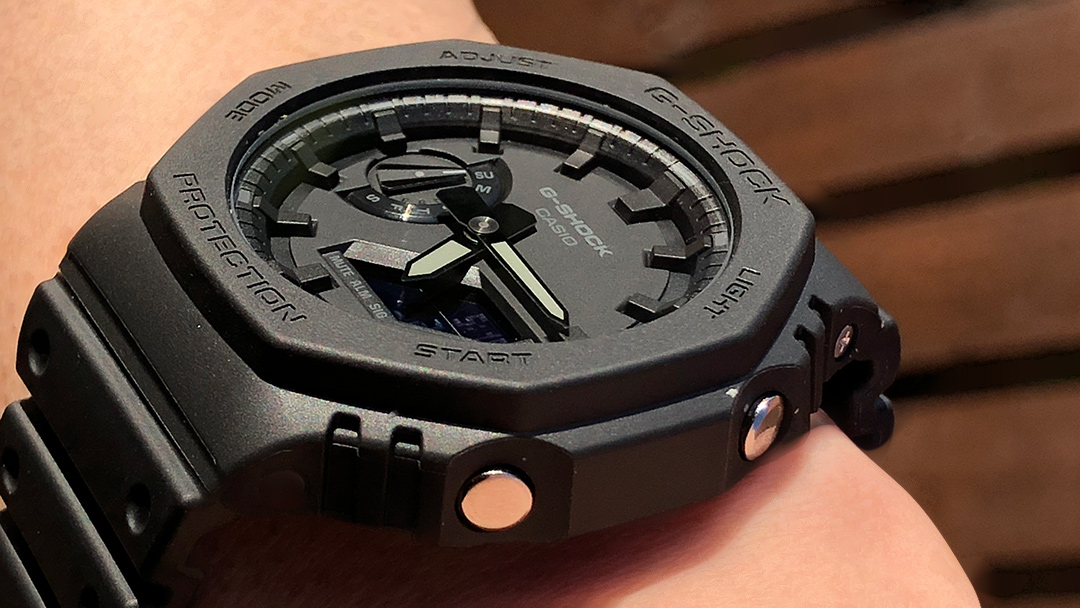 The buttons are easy to use and the adjust button top left is not recessed like on other Casio and G-SHOCK models. This is welcome as its a pain in the arse sometimes to activate it on other watches in the collection. Something people have commented on is the thinness of this watch compared to other Gs and this is evident when you flip the watch to the side. It measures less than 10cm in height. I can only assume they have managed to retain the ruggedness of what makes a G-SHOCK a G-SHOCK while reducing the dimensions through the use of what is called Carbon Core Quad. A side effect of this is that for some reason the watch doesn’t sit properly on wrist sometimes, with the lugs and strap not quite having the same snug fit to the wrist, even when pulled almost uncomfortably tight.

A brushed stainless steel caseback greets you on the reverse shouting about that carbon core quad technology and 20 bar water resistance then for what seems like no apparent reason at all there are quick release spring bars on each part of the strap. I’ve not seen any additional straps to buy yet but hey, new stuff! The strap itself feels a little thinner and more rigid than my other resin G-SHOCK and other Casios in general but this may be because it’s new and I’ve not broken it in yet. 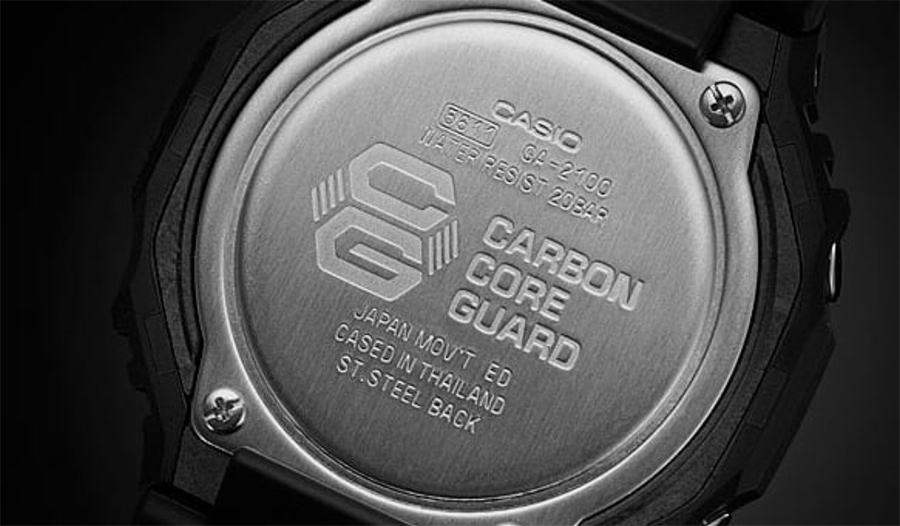 So what are my thoughts after a few days of ownership and wearing. Well it’s the current darling of our Instagram feed and I have been exploiting its beauty and popularity at every possible chance. It photographs real well, it looks striking on wrist and I’ve enjoyed wearing it out.

In daylight the dial reflects light from different facets of the multilayer structure, while at night things get a little harder to read. As mentioned the height and perhaps lack of reengineering of the strap means that the watch has a tendency to ride up rotate around the wrist and even on a watch box pillow you can see it doesn’t conform as other Casio and Gs do. 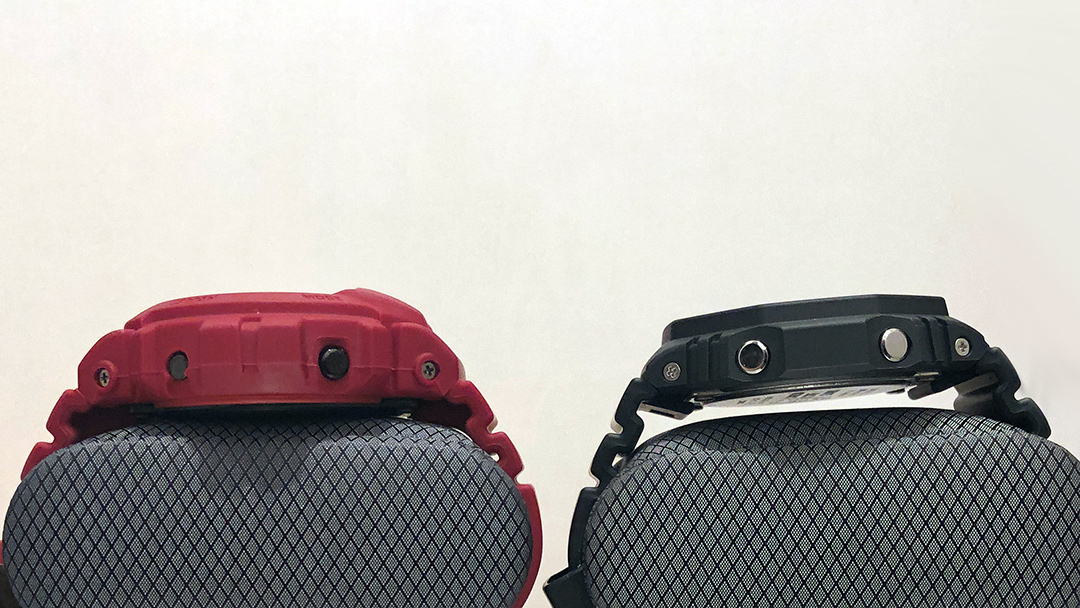 The LCD functions work but the size of the screen is so small as to make it almost a gimmick and for use in the gym to time rest periods its a major pain if the hands need to be coaxed out the way and the inverted display is also tiny which makes timer and stopwatch usage a chore and almost a fool’s errand.

So how would I improve it for a Mk2, Rikki Edition?

Am I going to keep it? Yup! We all have to take one for the team when it comes to fashion and this LBW (little black watch) is so hot right now I’m willing to forgive all those shortcomings.

Now that’s enough of my ramblings, time for another voice to pitch in – this time it’s John Truman – otherwise known as https://www.instagram.com/tru_time_/ on Instagram.

“After reading about the GA2100 on g-central.com it peaked my interest being a relatively affordable nice looking G-shock at £99.

There was no release date so I forgot about it and figured I would pick one up when I saw them being posted online, unfortunately it became bit of a hit and sold out, but after a quick eBay search I found a German seller with one so snapped it up.

A few days later it arrived and after opening it up I immediately fell in love with it. My only negative was that it was a bit smaller than expected, but I’m used to my larger GA100 and GA120’s (like Rick finding everything small because the Panerai barely leaves the wrist).

But after 4 days of wearing it I have now acclimatised to the smaller size, the dimensions 48.5mm x 45.4mm x11.8mm make it the ultra thin G-Shock thanks to it’s carbon core case housing the 5611 module and the usual digital G-Shock features of stop watch, world timer and alarm clock feature as expected.

Casio claim the retro styling was inspired by the DW-5000c with its unequal octagonal bezel but everyone else immediately (and probably the even most obsessive G-Shock collectors) saw inspiration drawn from another brand and dubbed it the Casioak. The only con I can find, unless you want an ineligible watch, is it’s virtually impossible to read the time unless in direct sunlight which I expected as I have a few negative display G-Shocks and the Neo-Brite khaki green hands blend into the dial. Other than that I would still recommend buying one as the positives massively out weigh the negatives – and speaking of weight, it’s 51 grams! Gotta wonder what Omega were making a big song dance about. “ 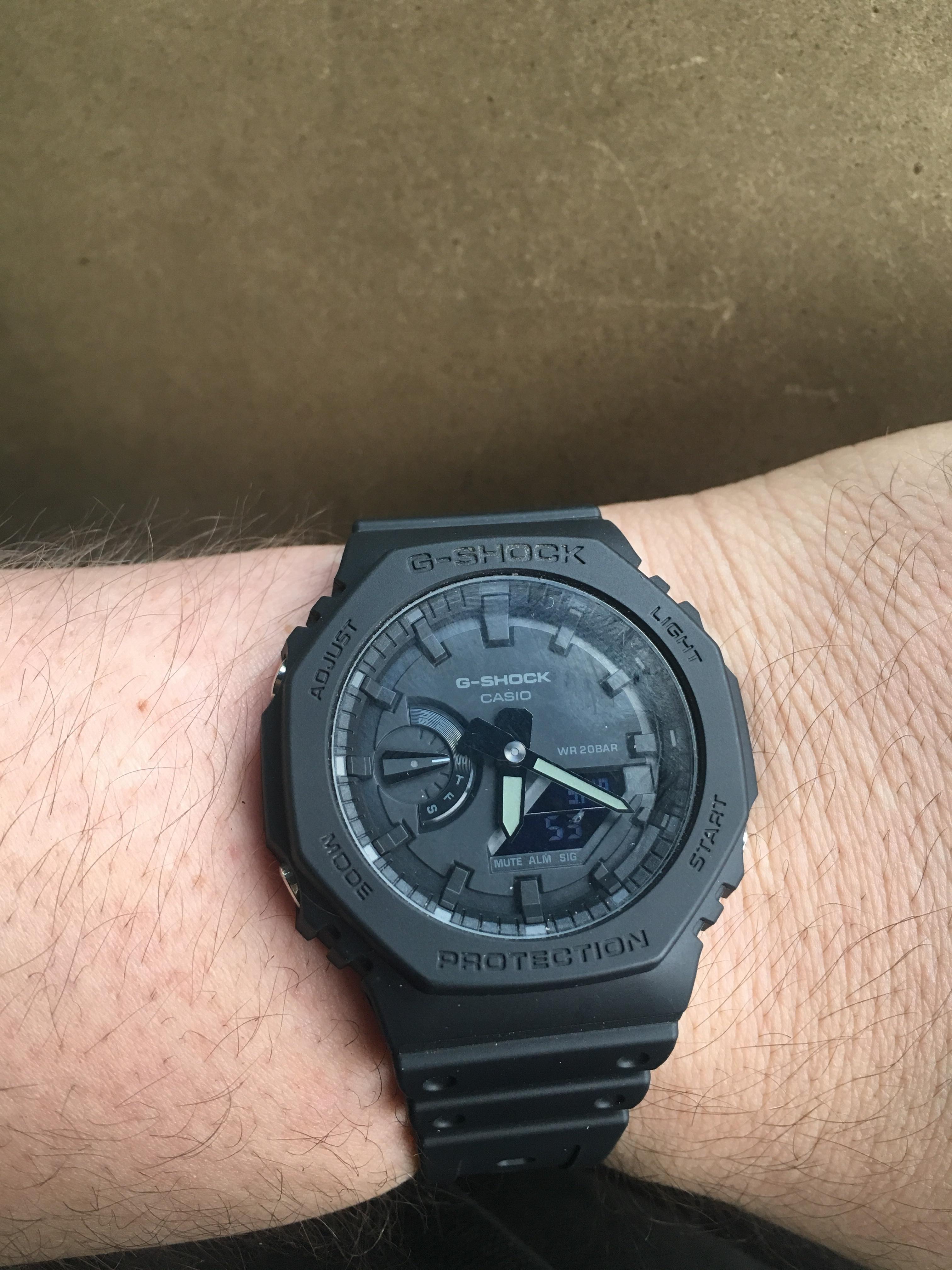 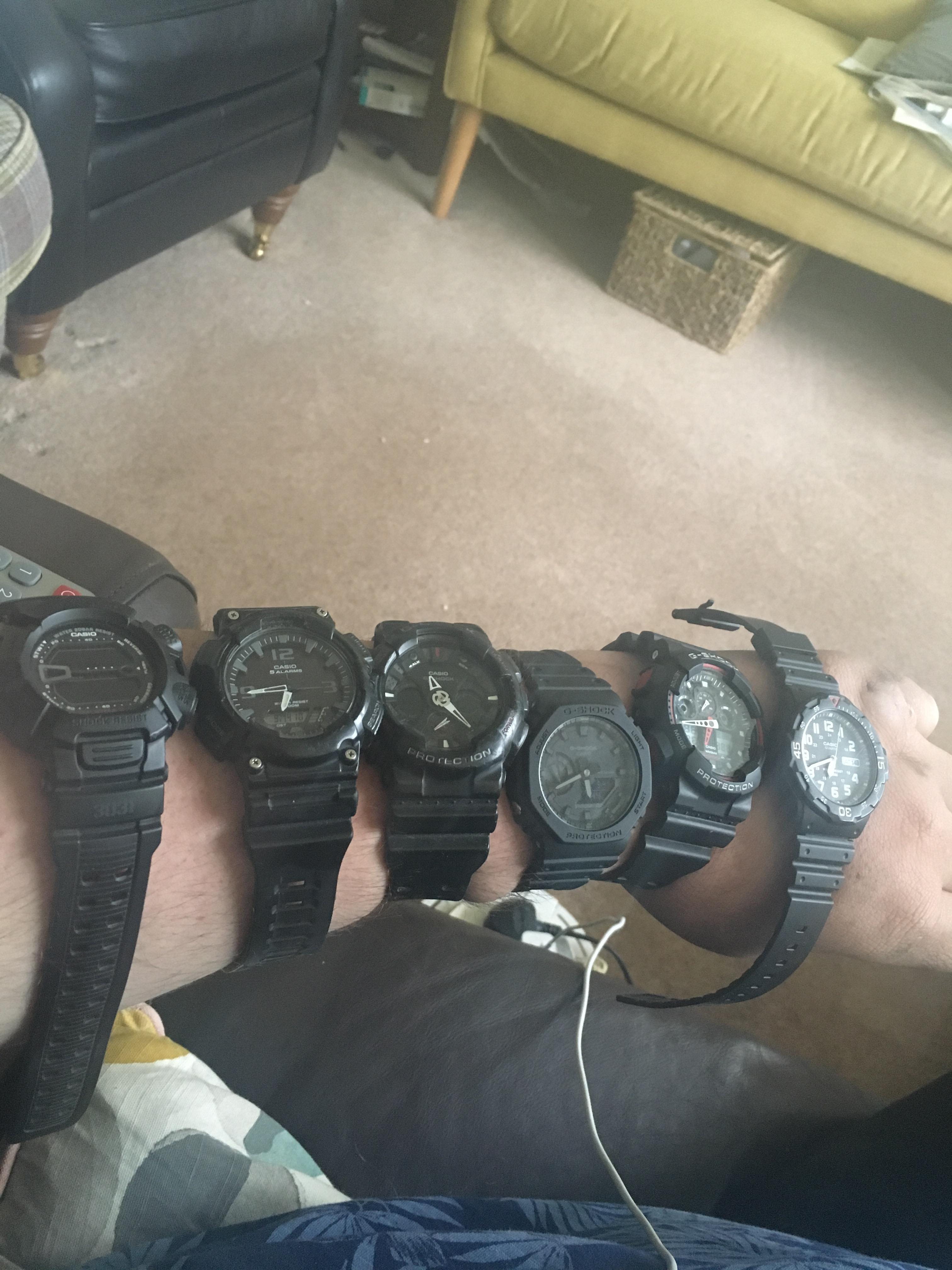 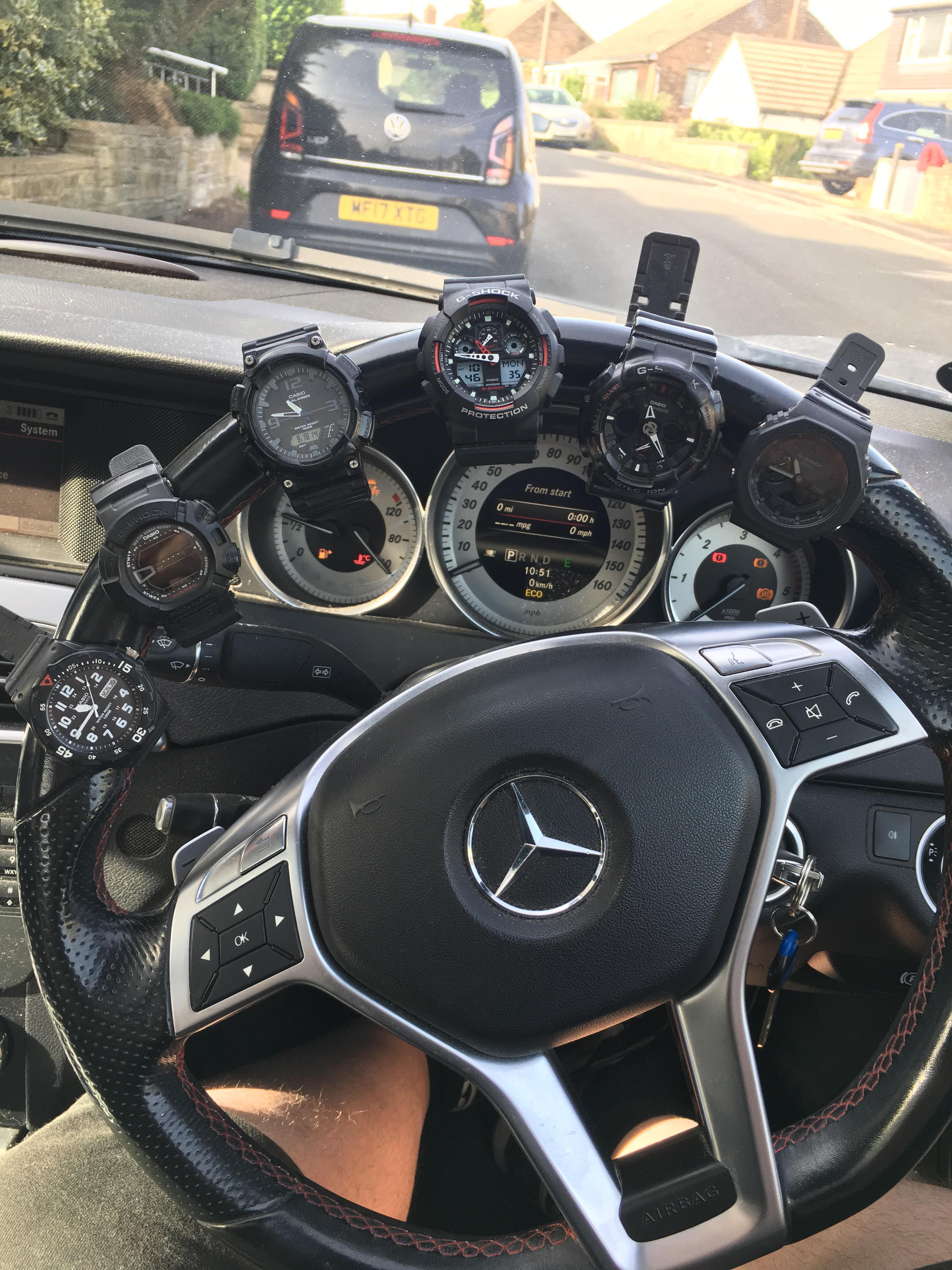