So a week or so ago two nice looking and well package straps arrived at Scottish Watches Towers from Zulu Alpha Strap Company. 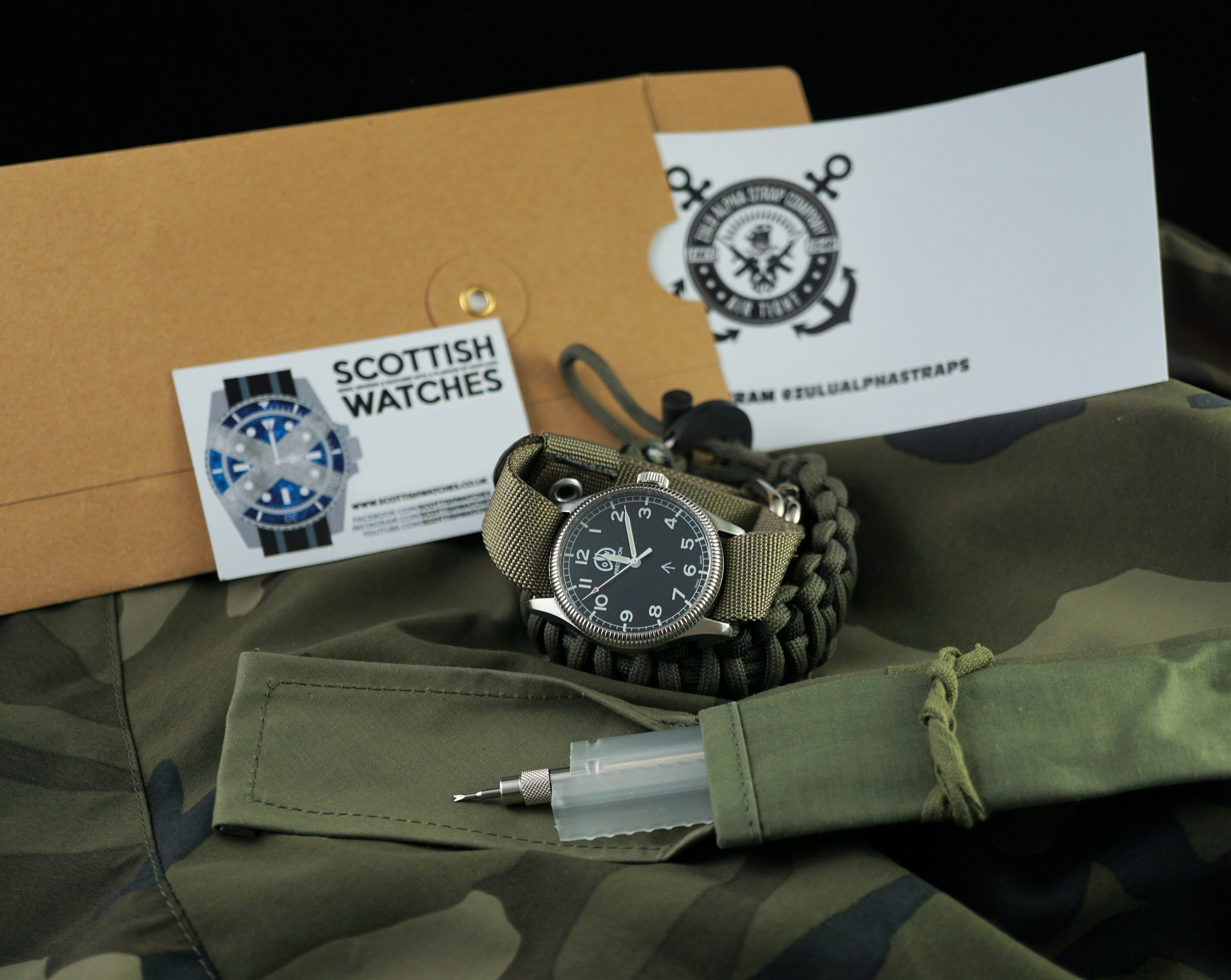 Social Media “Influencer” Style Disclaimer Crap: These review items were sent to us free of charge from the manufacturer with the aim of receiving an unbiased review. They are watch straps and not McLaren 570s, so rest assured we won’t be doing any sucking up.

I  decided that the best way to test and review these straps was to pass them around for a group review. It just so happened that I was meeting @rikkiwatches (Rikki) and @theticktockcollector (Logan) in the next couple of days so as Logan, in particular, has the largest strap collection in Scotland, I decided to look at them myself for a couple of days and then pass them around for further review.

Below are our conclusions.

“The strap maketh the watch” by Logan

At least that’s my take on the relationship between a watch case and the band of material that keeps it on your wrist.  Changing the strap on your watch is not maybe everyone’s cup of tea.  After all, the brand that designed the watch will have painstakingly spent hours of meetings deciding what material, colours etc only for an idiot like me to come along and stick it on a fluorescent bright orange nato. Whilst simultaneously scratching up the back of the lugs in the process. 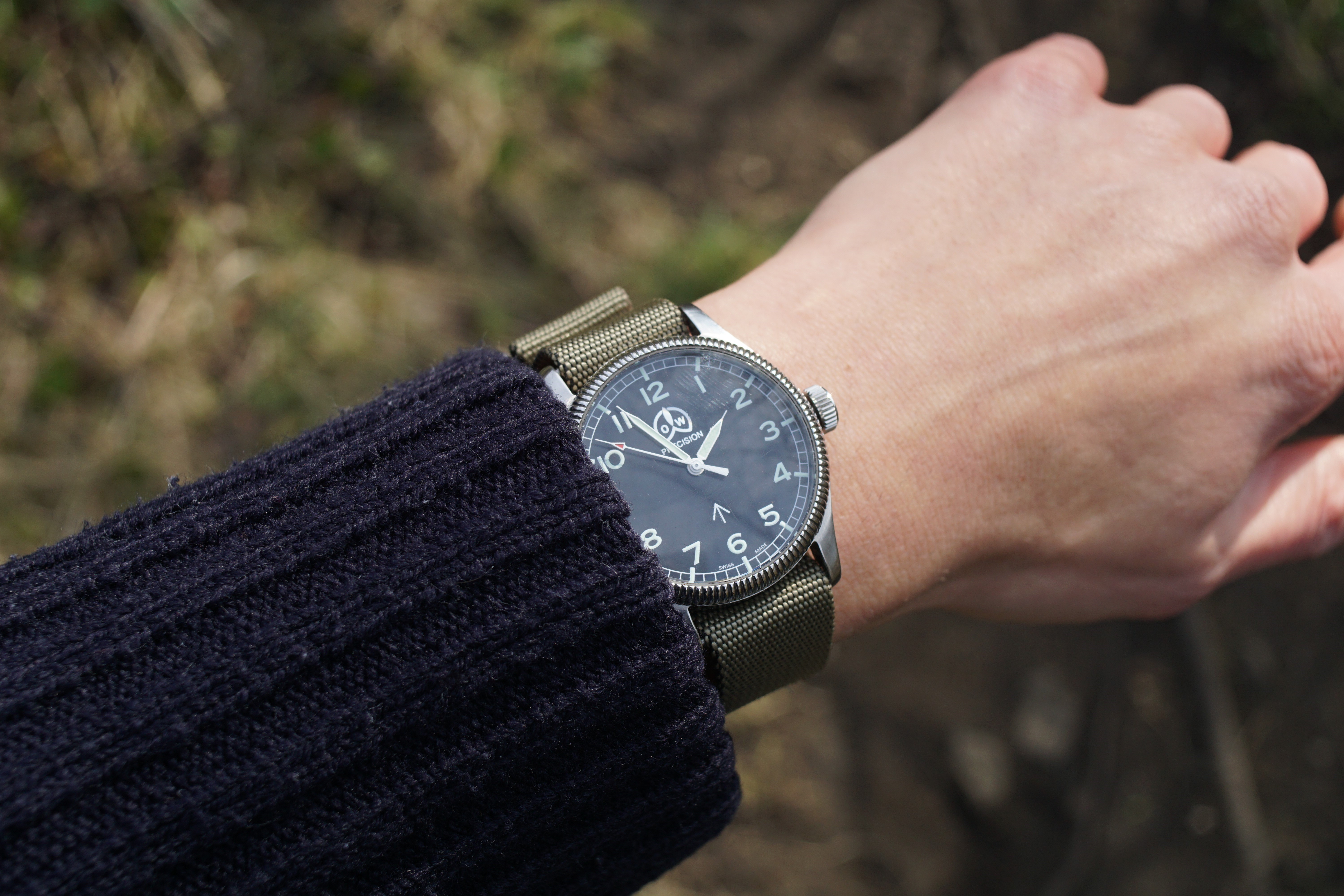 However, a change in a strap can alter the appearance of a watch and renew interest in a piece that maybe you have grown accustomed to and become bored of, giving it a new lease of life.

I have recently developed a penchant for a more Military / Tool look for some of my watches and when Rick from Scottish Watches pulled out the Zulu-Alpha one piece in an Army Green colour I was keen to try it out.  Especially since I’d seen them plastered over Instagram recently. I will begin by saying I have a healthy respect for our men and women of the Armed forces and like the idea of someone from that background coming out with their own watch straps.  So onto the review with mostly good points but a couple of bad points. 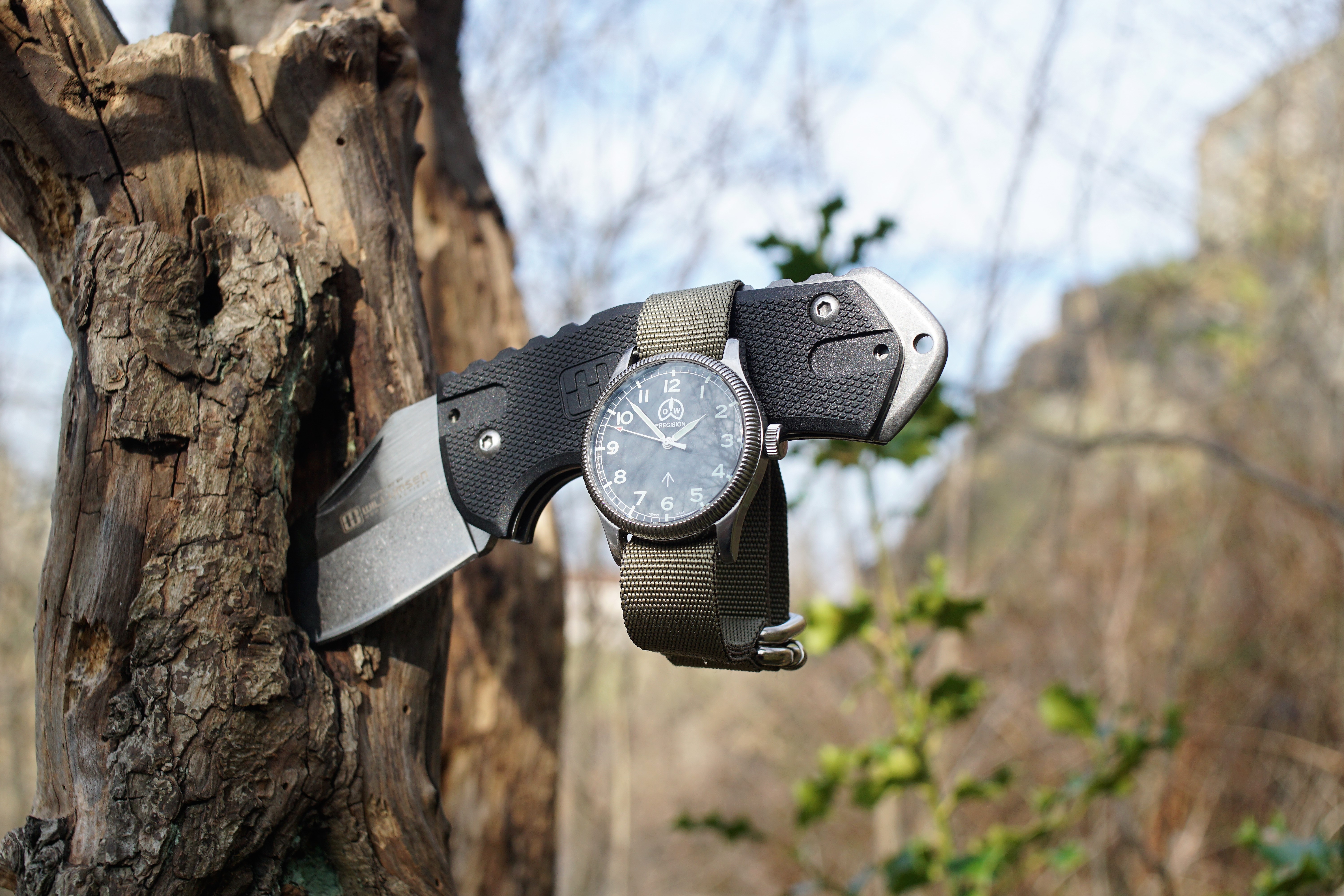 The strap comes in a string-tie envelope with a thick piece of paper with the company logo and a request to tag them on Instagram @ZULUALPHASTRAPS.  So far so good.

There must be something more significant about the date ‘1546’ but all I could find was something about the Schmalkaldic War or the Treaty of Ardres (also known as the Treaty of Camp). A Peace Agreement between England and France. Have ZuluAlpha been going that long!?

The first thing I noticed was, no instructions.  OK, you don’t exactly need a Degree in Material Science to work it out but it would have been nice to have included a piece of paper or card with a basic diagram of how it could be worn. 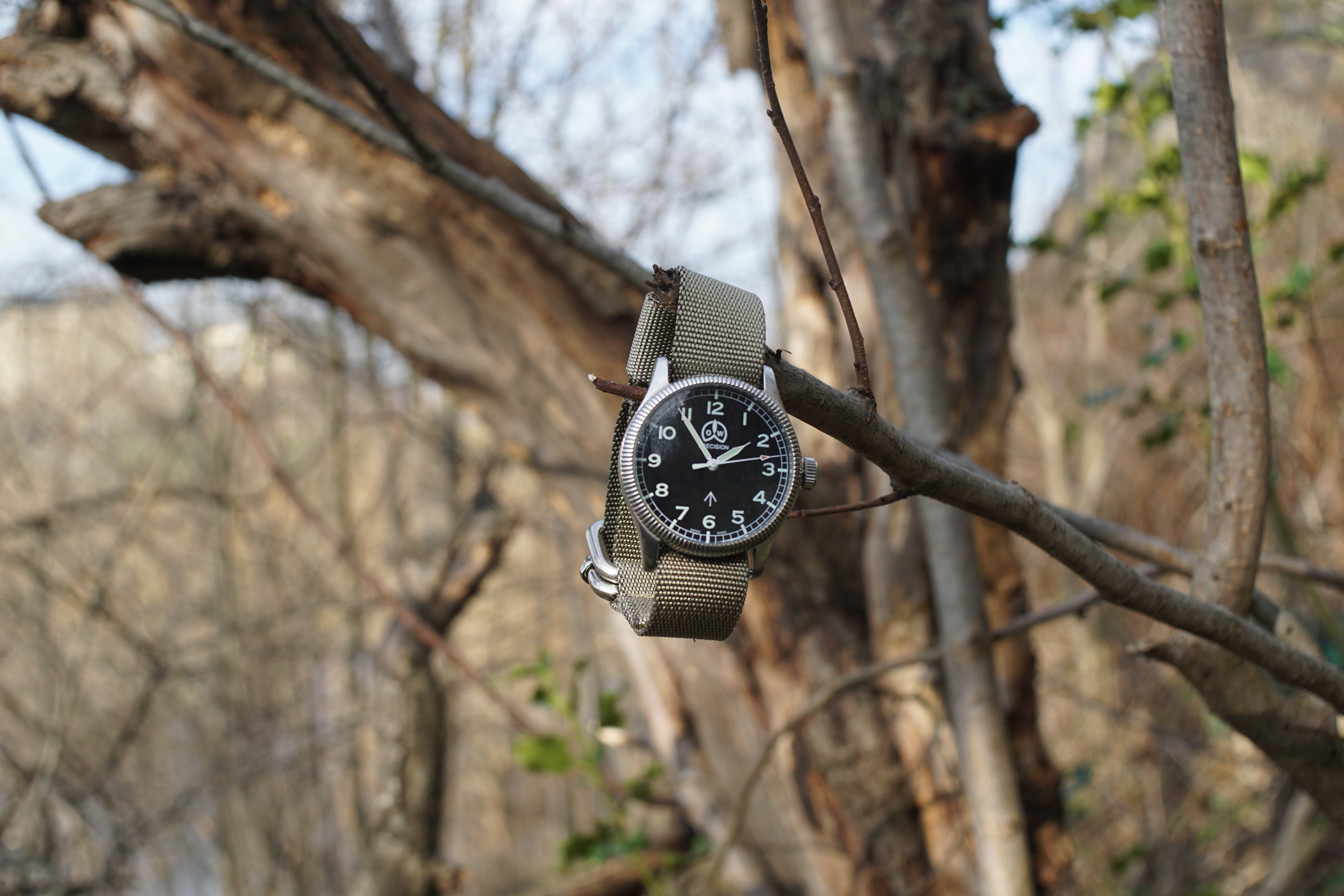 The ‘keeper’ has the potential to just slip off the end and go walkies.  Not sure there is a solution other than some sort of thread attached to the strap to stop it going missing? I’m not going to beat them up about it as I have other straps that have the same design and I haven’t lost the keeper yet.

The nylon weave is nice and tight, it has a nice mix of thickness yet soft and pliable.  This is tricky to get right.  Too thick and it’s hard to get between the springbar and side of the watch case.  Too thin and you end up with a cheap feel and the watch feeling top-heavy. They got it right.

I’m not sure how wide the strap I got to try is. I think it’s meant for 20mm but is slightly narrower so can fit 19mm lugs as well. 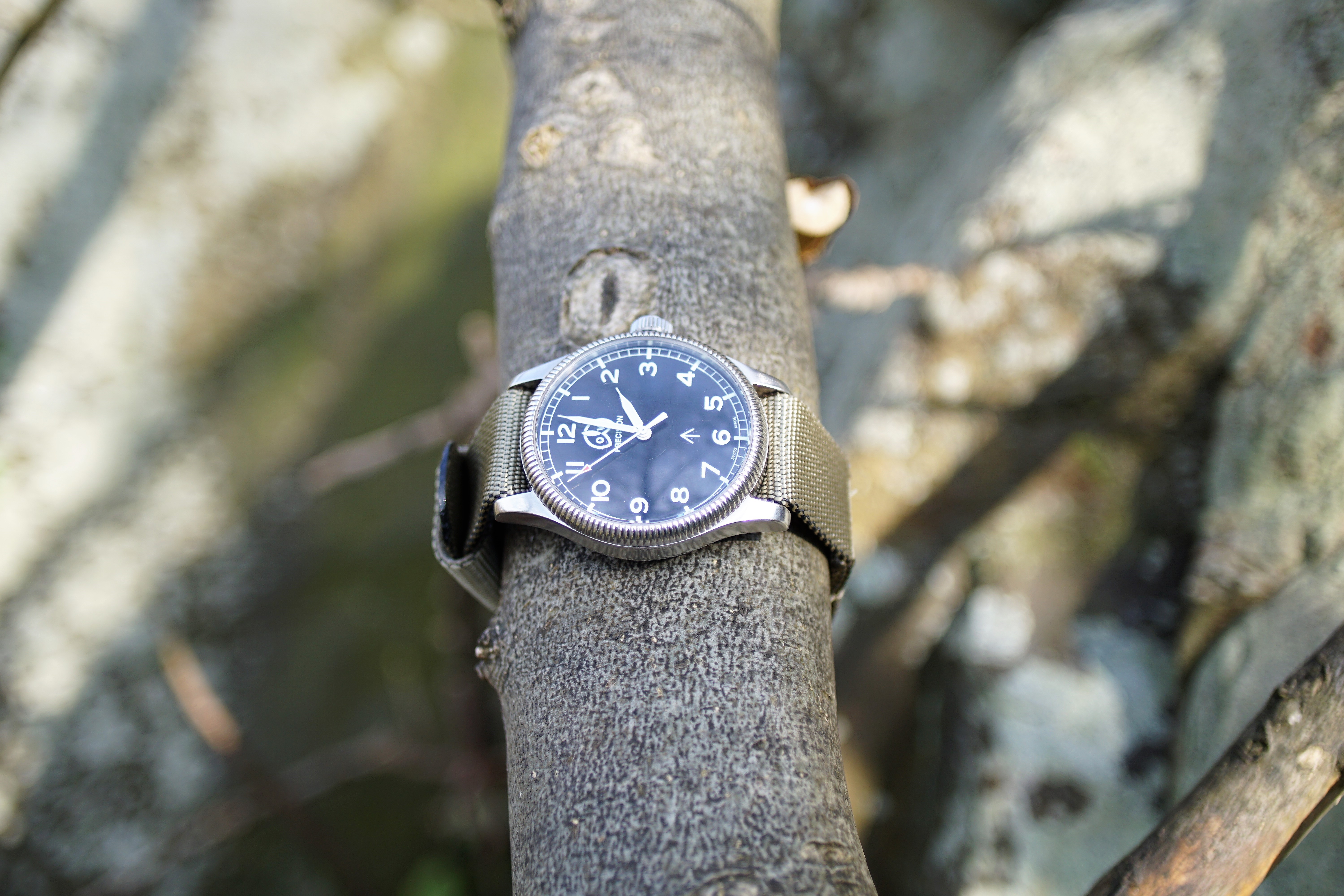 Onto the hardware.  The buckle is well designed but maybe a bit ‘chunky’ for some. Once you get it tightened it is not going to come loose in a hurry. So Thumbs up there. The nylon keeper has a metal pop rivet on the underside which seems a bit overkill and adds to its weight.

I say this because it likes to leave a circular indentation on the skin. Maybe there is a way to just stitch or heat seal? It could be that this is a very secure way to stop the keeper coming apart after years of use. 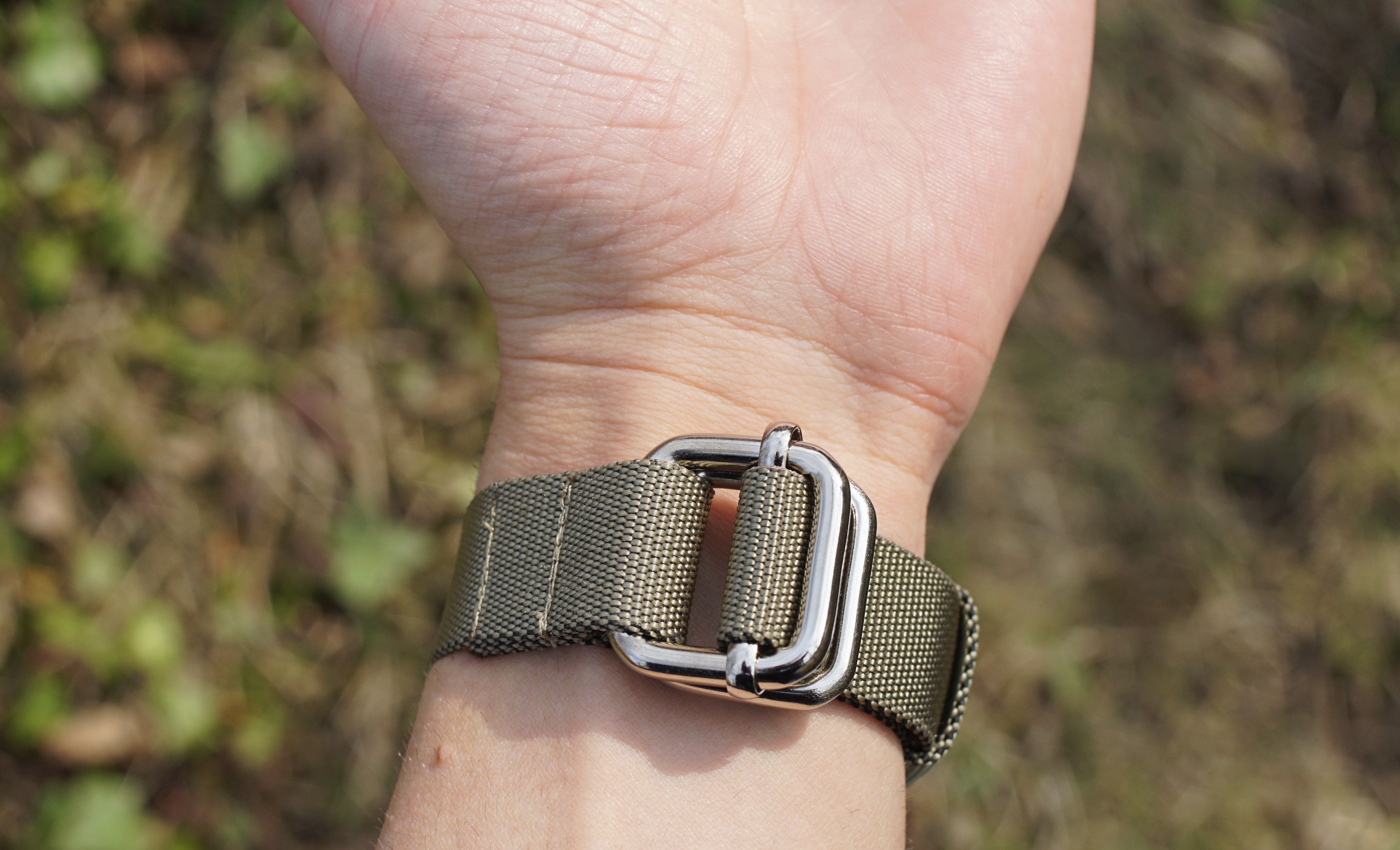 The length is actually fine.  Even for my scrawny twig-like wrists.  If you have really small wrists then there is the option of cutting and heat sealing the end or just tuck the excess into the keeper.

Overall it is great and if you are looking for an alternative to the nato and zulu straps this is a good way to go.  I think if they offered some alternative military inspired colours (they have Olive green and Tan), like Navy Grey or some regimental colours (RAF etc) then they could be onto something here.  Possibly some elastic material ala NDC / Marine Nationale? Also some thermally blued steel or blacked out PVD buckles?

My problem with TV shows that judge people like Strictly Come Dancing is that really they should set the first dancer, who performs reasonably at a 7 and then judge up and down from there.

For that reason, the straps from ZuluAlpha get a guaranteed 7 out for 10 from me.

I have hardly ever worn a NATO strap let alone reviewed one, so this as my first ever attempt will be the bar by which all others are judged.

My observations however as follows.

The packaging and presentation are great and when you open the envelope, you do get the glimpse of a new toy smell and luster, a nice pick me up on a dull day.

So far so good. 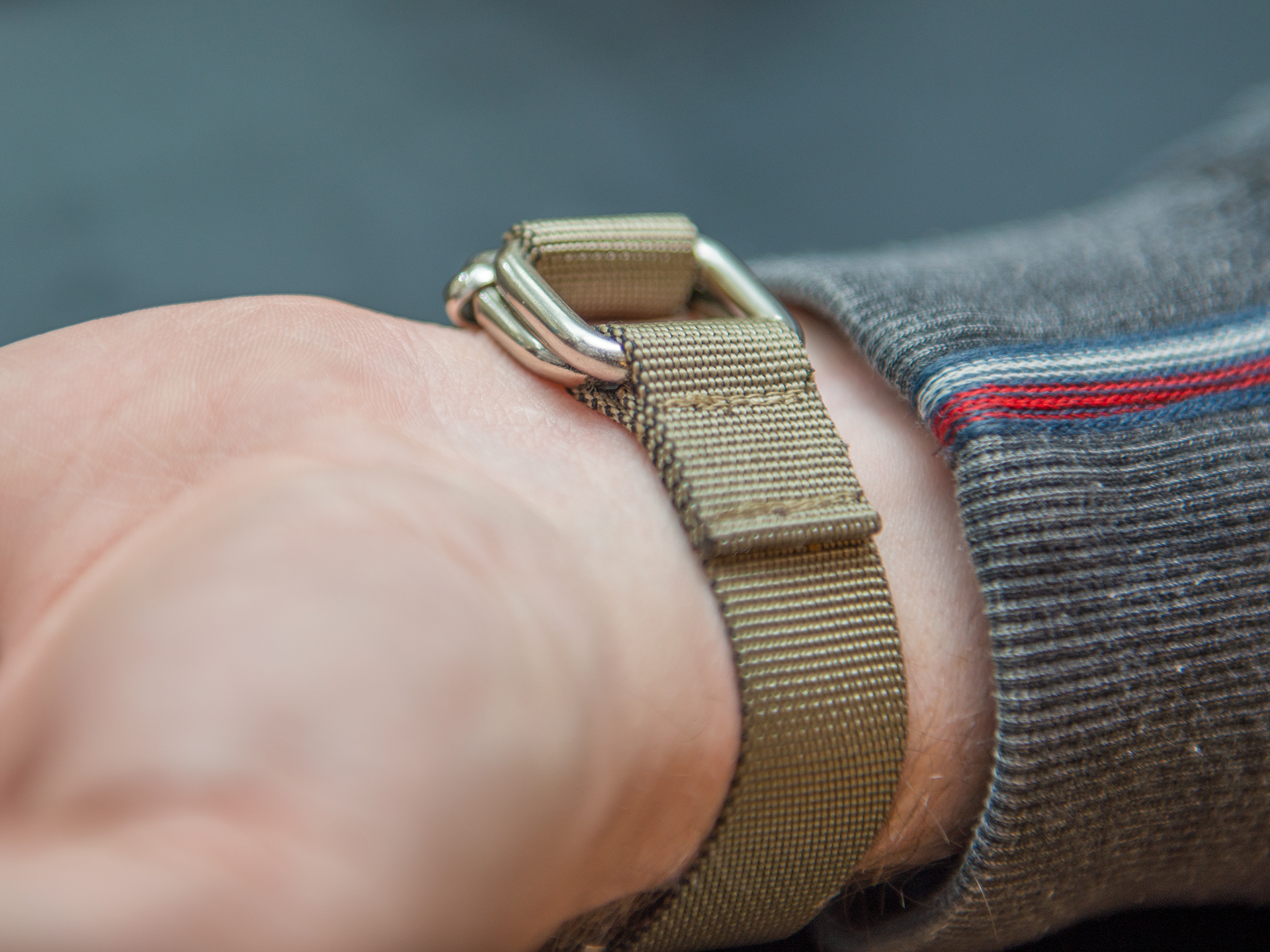 Now I consider myself to be a fairly practical individual and think nothing of the challenge of build IKEA’s finest without reference to the instructions, but boy-o-boy did I need some instructions as to how to fasten this strap.

The issue is that it is tang buckle-less, it is friction fit only and so the way you fasten it is to produce friction. This is important and in this case, there were no instructions, this could have been because it was a sample for review and so perhaps a level of competence was assumed that Rikki and myself will continue to prove is generally missing.

However, a quick DM to the manufacturer to check I was doing it right and it was all systems go.

Attached to a Rolex Explorer 2 Polar of 1990 vintage it looks just the part, comfortable, secure and pops the Polar dial just right. 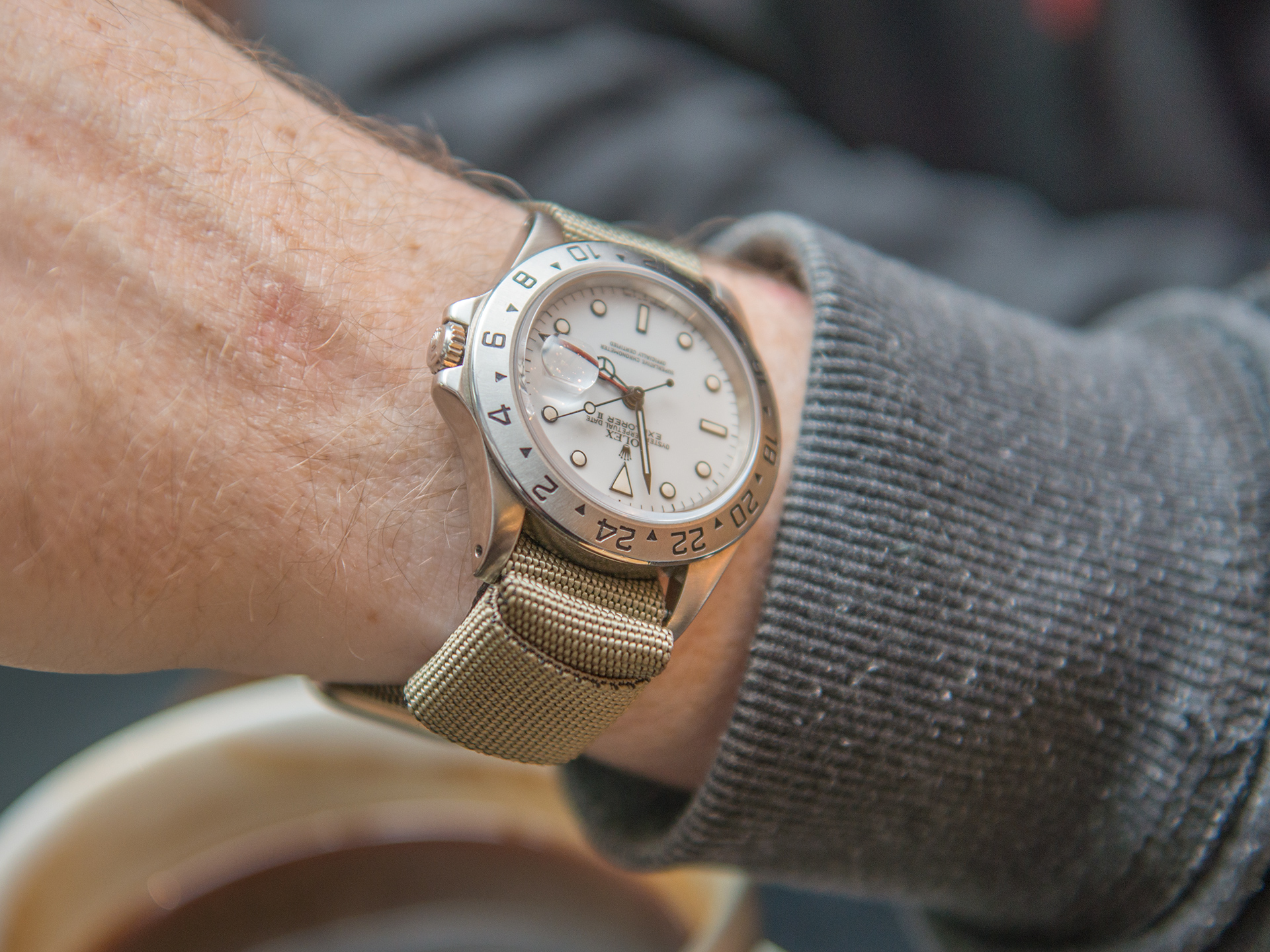 The price is good and the aftersales service was perfect.

If you are looking for something to freshen up the look of a watch in your collection this is just the job. I understand that a range of different sizes and clours is imminent.

So as I said before it is a 7 out of 10 from me, but until I review another watch strap who knows what that actually means.

“Hard Wearing and Built To Last” by Rikki 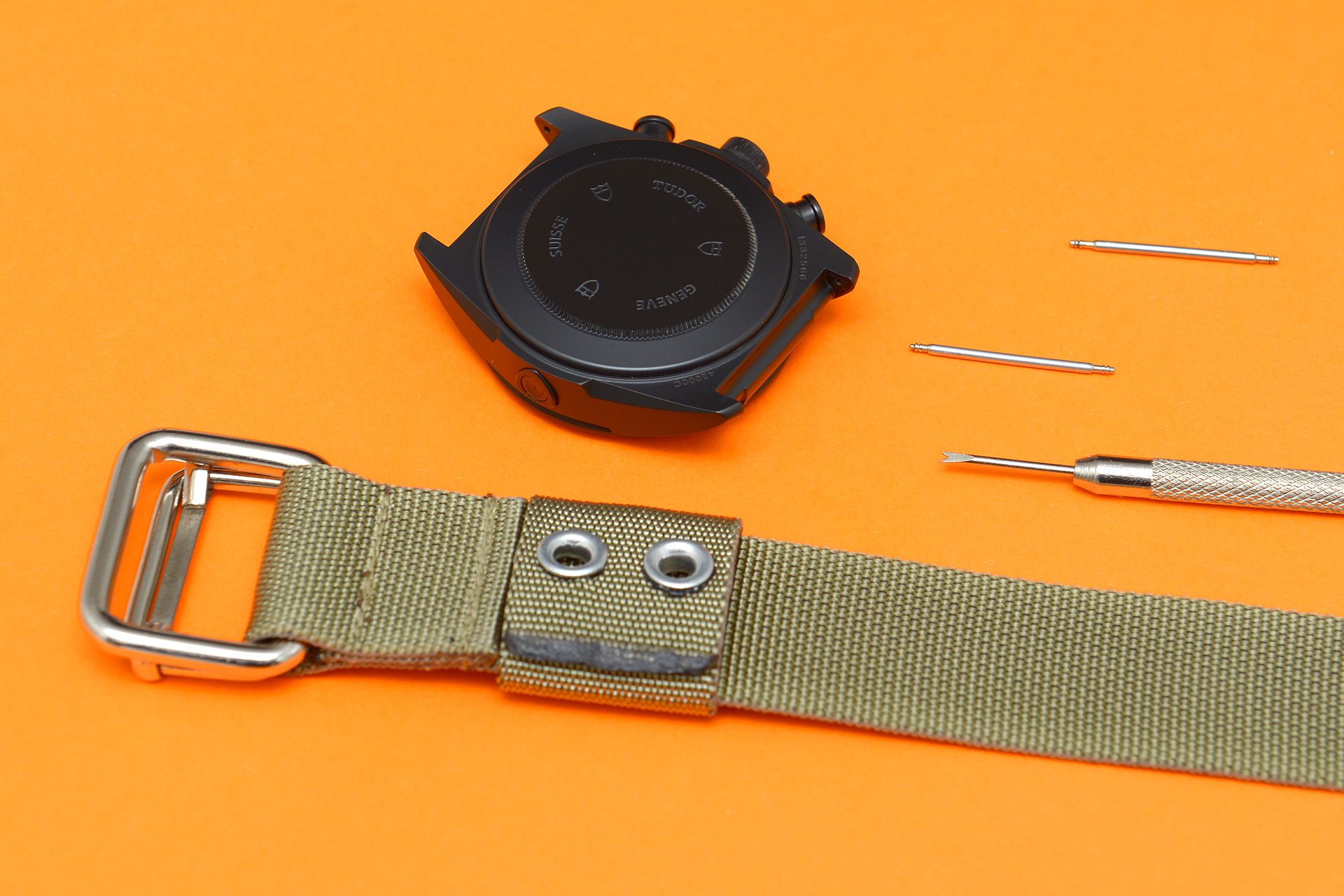 This is a strange one. The first time I attempted to fit the 24mm strap to my only 24mm lug width watch – it didn’t fit.

When I went to get the photos for this review and tried again and it did! I think Rick’s been sneaking into my house again at night and switching things around!

But anyway, since it now fits, I can tell you a little about the strap.

First up – its meaty! 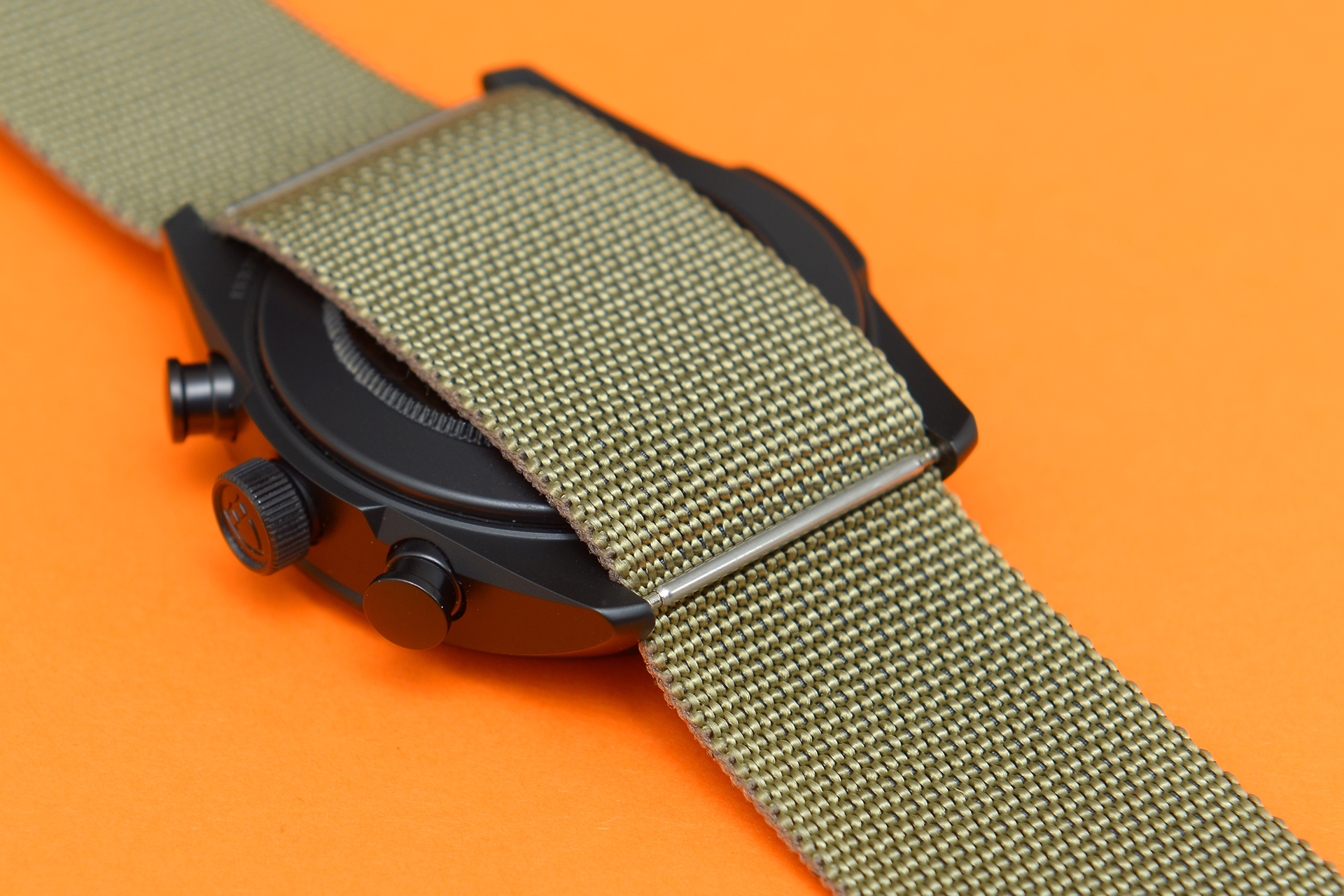 I’ve got a ton of straps for various watches. Crap £4 numbers through to eye watering £180 Everest leather affairs and these are among the highest ranking when it comes to material quality and weight.

I think that’s why I had bother getting to fit on my Tudor, the material is so thick it wasn’t playing ball with the spring bars but on the second go I maybe used a bit more brute force and ignorance than the first time around.

Like the chaps mentioned above, I had no idea how to fasten the strap, so since they did that donkey work I just inspected the build, looks and durability instead. 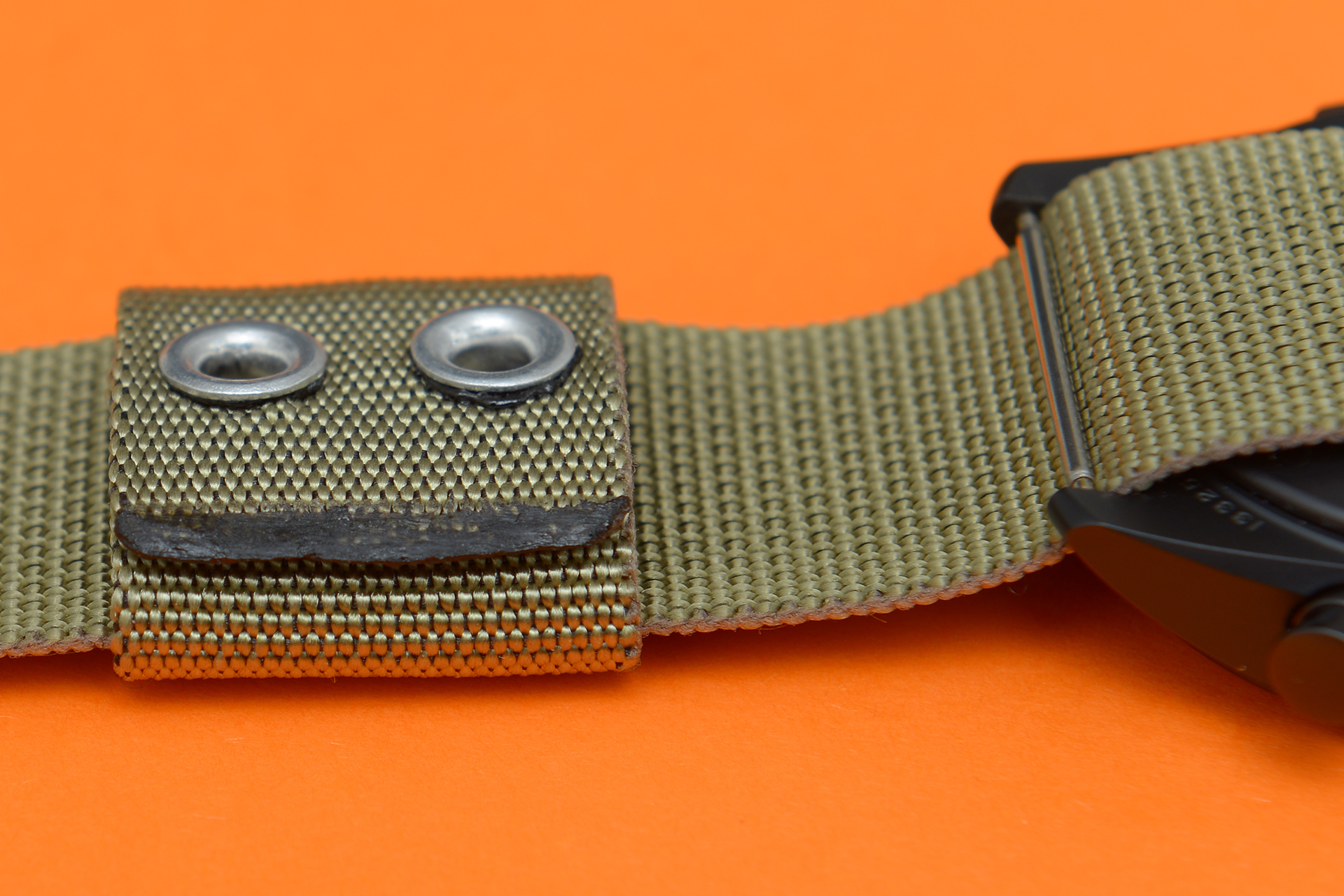 The material used is very high quality. The edges are neat and don’t look they will start to fray any time soon unlike most nato and zulu style straps.

The hardware is tough and looks like it could handle all kinds of activities without issue and the ends have been either heat treated or glued to prevent any unraveling out in the field, which is another area where most straps meet their demise. 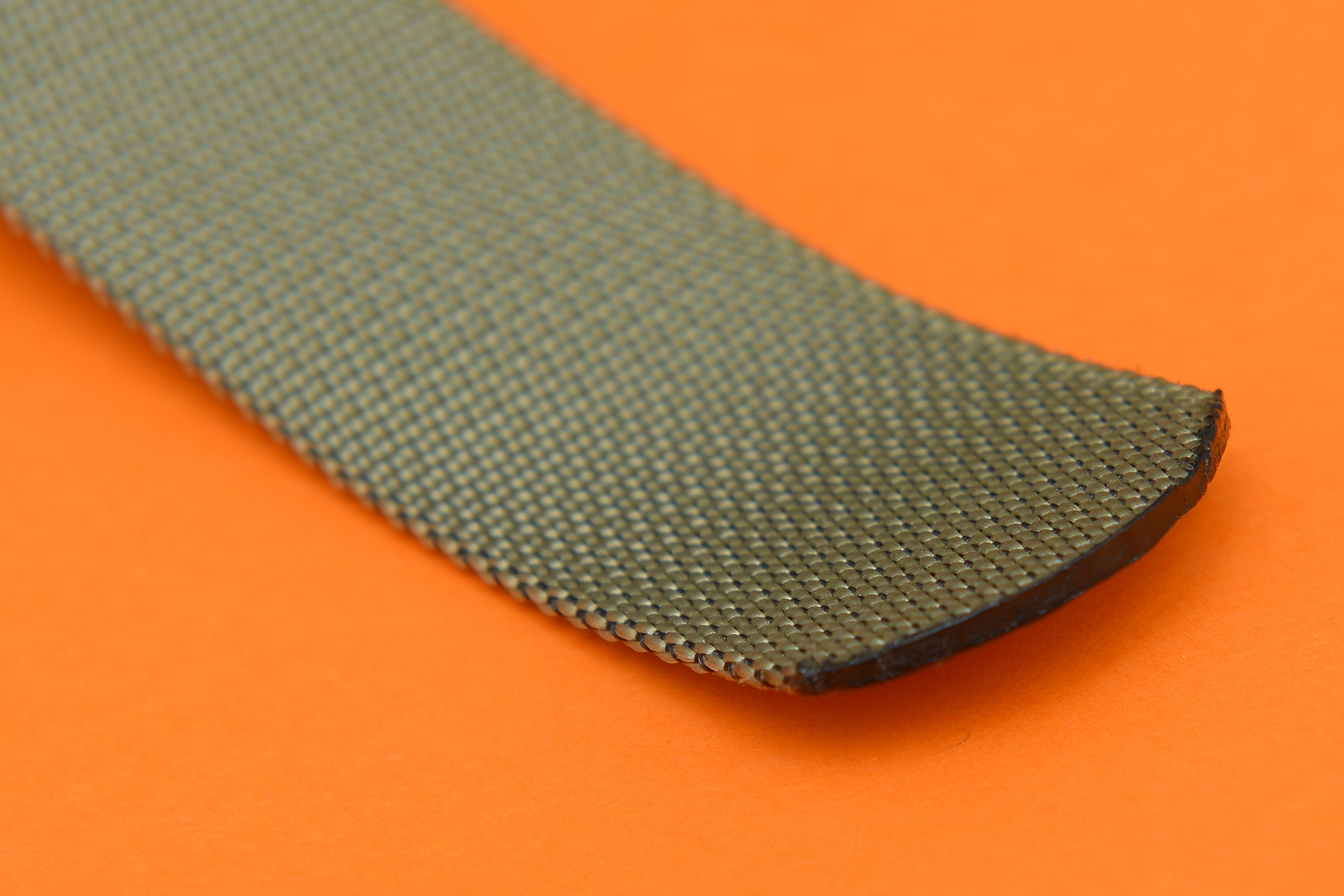 Looks wise, on the right watch it will be cracking. On my matt black ceramic with red accenting Fastrider – not so much.

If they come out with a black version with black matching hardware though that could be a winner for the Tudor! 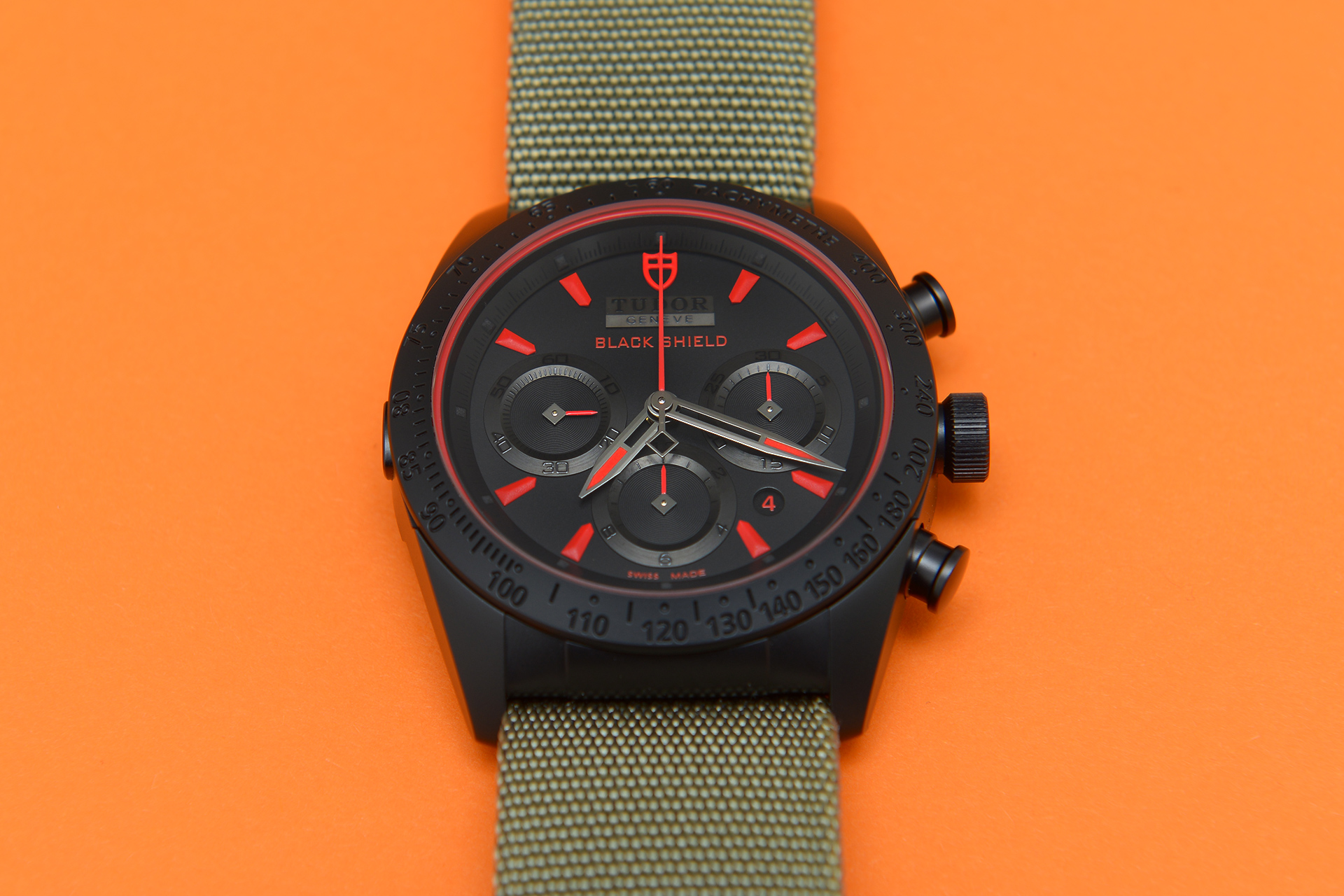 My overall thoughts? I like it. Army surplus sling material from the SA80 assault rifle on your wrist? Who wouldn’t!

Walking around with that on your watch you’d almost feel part of The Expendables!

Firstly I did not get @rikkiwatches cultural reference with a 5/7 review and had to look it up. I suggest a visit to Urban Dictionary if you need help also.

In summary then from the three of us with various experience and use of Nato type straps, I think it is fair to say we were all very impressed with the strap itself, and I have also now seen that there is an instructional video available to help the inept, so all good.

A great product from the Zulu Alpha Strap Company, I look forward to seeing further products from them in the future, I suggest you check them out.